The 10 Most Incredible Places in Arkansas, USA 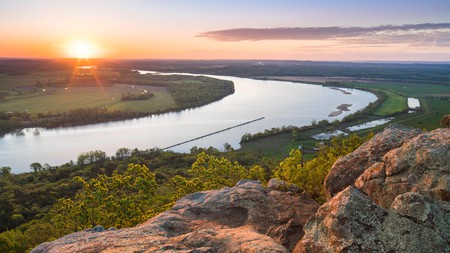 Arkansas is a US gem – and not just because visitors can dig for diamonds here. Whether you’re looking for magnificent architecture, caverns, sites of literary interest, art galleries, or nature, there is plenty to fascinate you in the state. We’ve rounded up the 10 most incredible places you’ll find in Arkansas. 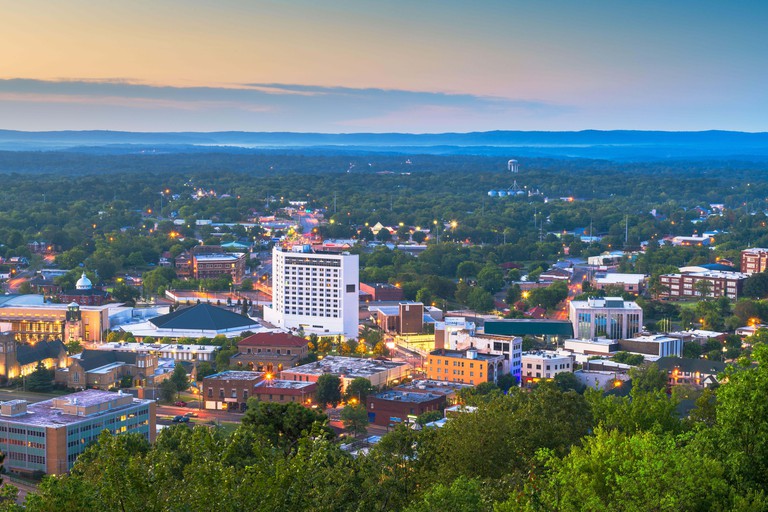 © Sean Pavone / Alamy Stock Photo
Hot Springs is a city in the Ouachita Mountains with a unique history and superb architecture. Settlers in the 1830s found that the waters of the springs had medicinal properties. In the late 19th and early 20th centuries, Hot Springs developed as a spa town favored by celebrities and even mobsters such as Al Capone and Lucky Luciano, who came to gamble at Oaklawn Park Races and enjoy the waters. Many of the buildings from this period survive in different styles – Neoclassical, Neo-Renaissance, Italianate and Spanish – especially on Bathhouse Row on Central Avenue. Major League Baseball teams who head to Hot Springs for their spring training programs can also be seen about the town.
Open In Google Maps
Hot Springs, Arkansas, USA
Visit Website
Give us feedback

Museum, Park
Facebook
Email
Twitter
Pinterest
Copy link
Share
Map View
Petit Jean State Park lies in the north of the state just to the west of the town of Conway. The state park is said to take its name from a young French woman who lived in the 18th century in what was then Louisiana Territory. The story goes that her lover was to join an exploration of then unsettled land, so she disguised herself as a man and joined the expedition as Petit Jean but died on the journey. The park is famed for the natural beauty of the scenery: there are huge cave formations, canyons, and the man-made Lake Bailey for boating and fishing trips. Winthrop Rockefeller, a member of the famous Rockefeller family, moved to Petit Jean in 1953 before becoming the governor of the state. He established farming and philanthropic ventures in the area.
Open In Google Maps
1285 Petit Jean Mountain Road, Morrilton, Arkansas, 72110, USA
+15017275441
Visit Website
Give us feedback

Museum, University
Facebook
Email
Twitter
Pinterest
Copy link
Share
Map View
The Hemingway-Pfeiffer Museum can be found in Piggott, not far from the Arkansas-Missouri state line, and was once the home to the Pfeiffer family, who owned about 60,000 acres (24,281ha) in the area. In 1927, the great writer Ernest Hemingway married Pauline Pfeiffer in Paris and was known for making frequent trips to Piggott to write and relax until they divorced. A barn in the grounds of the Pfeiffer house was turned into a studio in which Hemingway penned much of A Farewell to Arms. The Pfeiffer family owned the house until 1950, when the Janes family bought it. In 1997, it was taken over by Arkansas State University, and in 1999, the house became a museum and educational center, while the studio was restored to the appearance it had in the 1930s.
Open In Google Maps
1021 West Cherry Street, Piggott, Arkansas, 72454, USA
+18705983487
Visit Website
Give us feedback 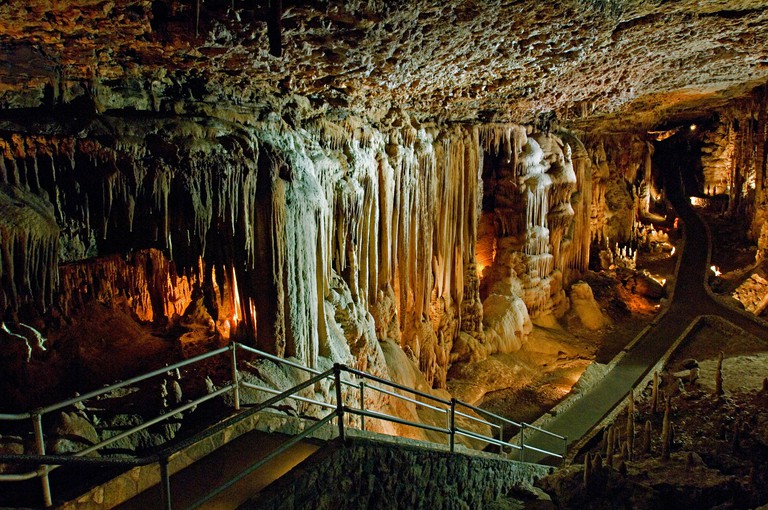 © Don Smetzer / Alamy Stock Photo
Blanchard Springs Caverns are an extraordinary natural phenomenon in northern Arkansas. The caverns are located within the Ozark-St Francis National Forest and are a major draw for visitors who can take advantage of guided tours through various chambers and rooms within the caverns. The caverns were only explored for the first time in the 1950s, though discoveries made here include a Native American skeleton that dates back over a thousand years. Visitors can expect to see spectacular formations of stalactites and stalagmites throughout the caverns.
Open In Google Maps
704 Blanchard Springs Road, Fifty-Six, Arkansas, 72533, USA
+18707572211
Visit Website
Give us feedback

School
Facebook
Email
Twitter
Pinterest
Copy link
Share
Map View
Little Rock Central High School is one of the most historic sites in the state of Arkansas. Today the high school is a national historic landmark and remains a working school, but back in 1957, it was the scene of a key event in the history of segregation and civil rights in the United States. It is here that nine black students, known now as the Little Rock Nine, were denied access to the school despite the national policy of desegregation in education. In the end, the police and army were sent in by President Eisenhower to let the nine students enter the school. Today, a visitor center sheds light on the events.
Open In Google Maps
2120 West Daisy L Gatson Bates Drive, Central High Historic District, Little Rock, Arkansas, 72202, USA
+15013741957
Visit Website
Give us feedback 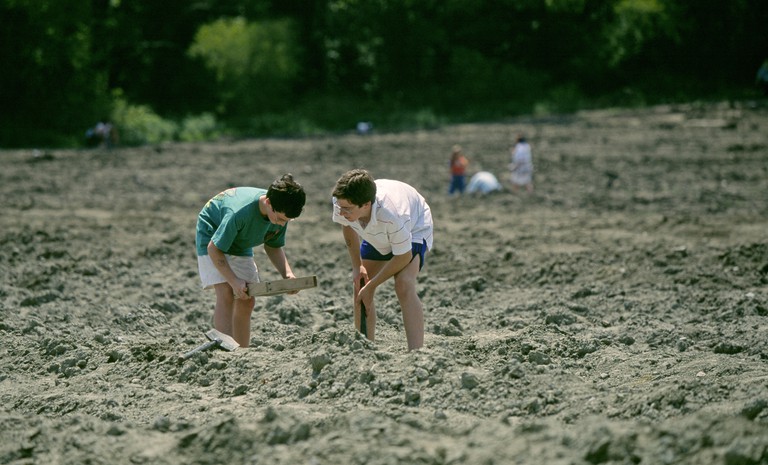 © Buddy Mays / Alamy Stock Photo
The Crater of Diamonds is a unique attraction – it is the only diamond site in the United States where visitors can dig for treasures and keep anything they discover. The site, which covers 37.5 acres (15ha), was once the face of a volcano that brought diamonds to the surface of the earth over 100 million years ago. In 1906, a local farmer discovered a diamond on the site, and thousands rushed to Murfreesboro to try their luck. Today, many of the old buildings, such as the Guard House and Shaft Building, still stand and can be explored by visitors. In 1990, Shirley Strawn discovered the Strawn-Wagner Diamond on the site; it is now considered to be the only perfect diamond in the world.
Open In Google Maps
Arkansas, 71958, USA
Give us feedback 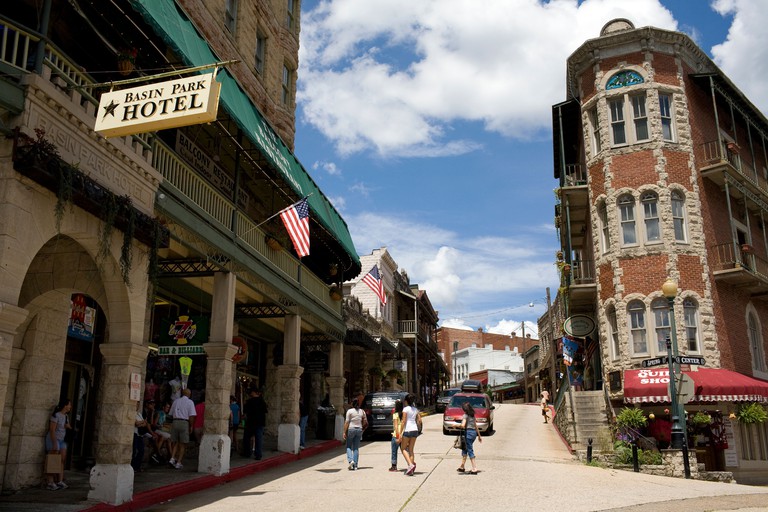 © Marc F. Henning / Alamy Stock Photo
The entire city of Eureka Springs is listed on the national register of historic places. The city was founded and grew as a resort town in the late 19th century and is still preserved as a record of architectural styles. Following the end of the Civil War in the 1860s, Eureka Springs was promoted as a resort for wealthy valetudinarians who would take the spring waters to cure a range of illnesses. The Crescent Hotel was built in 1886 and is known for being one of the most haunted places in the country. The Thorncrown Chapel, built in 1980 by the architect E. Fay Jones – a former student of Frank Lloyd Wright – is a magnificent piece of postmodern design to check out too. In the summer months, the city hosts arts, food and Mardi Gras festivals.
Open In Google Maps
Eureka Springs, Arkansas, USA
Give us feedback

Museum, Park, School, Theater
Facebook
Email
Twitter
Pinterest
Copy link
Share
Map View
Located in the historic McArthur Park area of Little Rock, the Arkansas Arts Center is one of the most important galleries and exhibition spaces in the state. Founded in 1960, the Arts Center built upon the collection at the Museum of Fine Arts in Little Rock. Winthrop Rockefeller was one of the driving forces behind the foundation of the center as a theater, gallery and arts school. The permanent collection focuses on 20th-century works but also includes Old Master paintings and prints from the 15th and 16th centuries. A recent gift to the gallery includes 290 drawings and watercolours by the great American modernist John Marin.
Open In Google Maps
2510 Cantrell Road, Little Rock, Arkansas, 72202, USA
+15013724000
Visit Website
Give us feedback 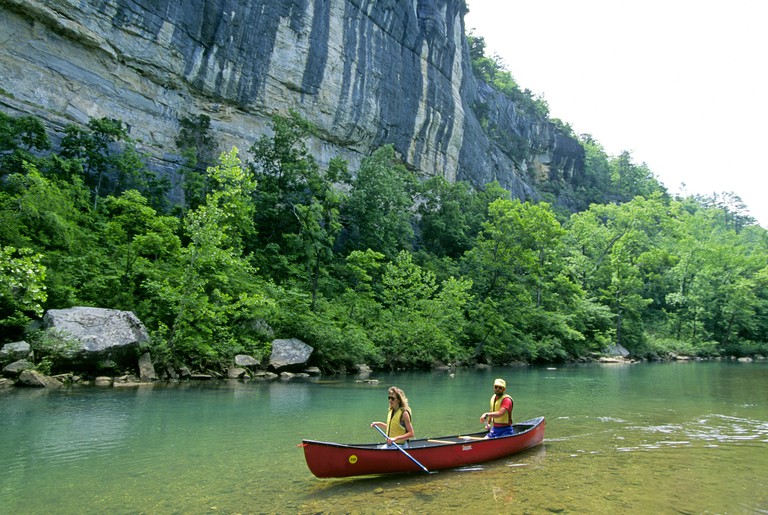 © Buddy Mays / Alamy Stock Photo
The Buffalo River was the first designated national river in the United States in 1972. It runs across the state for over 135mi (217km), and in the lower stretches, the area around the river is managed by the National Park Service. Visitors have plenty of opportunities to explore the immense and sublime scenery through hiking, canoeing, and fishing expeditions. Huge rock formations, caverns and bluffs sit along the river as it meanders through the Ozark Mountains, and Fitton Cave runs for 17mi (27km). The area played an important role in the pioneer era and the American Civil War, as well as being home to herds of elks.
Open In Google Maps
Arkansas, USA
+18704392502
Visit Website
Give us feedback

Market, Farmers' Market, American
Facebook
Email
Twitter
Pinterest
Copy link
Share
Map View
The River Market area of Little Rock on the Arkansas River is one of the most vibrant and dynamic areas of the city. Since the 1990s, the area has seen large amounts of investment and is now full of libraries, residential developments and markets. Over $300 million was poured into the project, which is centered around Ottenheimer Market Hall. The area has more than 100,000sqft (9,290sqm) of open space for stalls and hosts food events, farmers’ markets and concerts. Don’t forget to also check out the art installations, including a sculpture by Dale Chihuly.
Open In Google Maps
400 President Clinton Avenue, River Market, Little Rock, Arkansas, 72201, USA
+15013752552
Visit Website
Give us feedback
Give us feedback