Where the Murals Touch the Sea in La Paz, Mexico 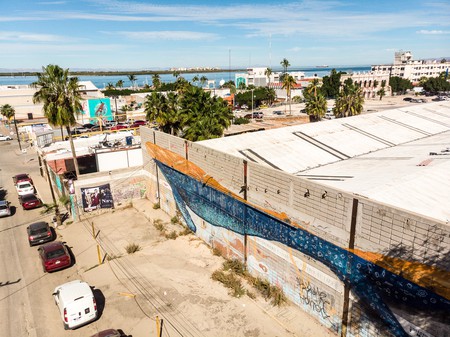 ‘Ballenon’ by Dagos is one of many murals in La Paz, Baja California Sur, Mexico | © Walter Shintani / Culture Trip

The colorful murals in La Paz, Mexico display the cultural origins of the town, as well as many simultaneous themes of the indigenous people and their relationship with the sea.

It’s 9am in the city of La Paz, Mexico, and the sun is slowly alleviating the humidity of the night, recoloring the bay to its intense bright blue. The bell of the corn-cob vendor starts to ring as he slowly pedals his large, rusted tricycle, pushing a cart full of unshucked ears of corn towards the city center.

As his cart turns onto Mutualismo Street, he passes a couple of tourists walking with their heads down, as they try to navigate the uneven sidewalk. 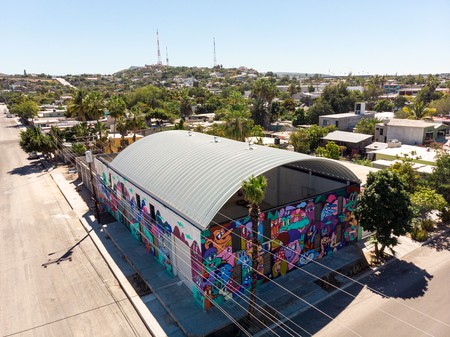 In contrast to the polished sea promenade, known as The Malecon, this part of the center feels like a ghost town. Old warehouses – repaired with rusty corrugated sheet iron and boards – recall the once-great commercial glory of the town.

Alarmed by the corn vendor’s bell, the tourists lift up their heads and look around. They suddenly realize there’s a giant flying whale painted amid the cracks of the walls. Before their eyes emerge other nearby figures of emblematic indigenous figures, salty fisherman and baby sea lions. They are surrounded by sprawling murals. 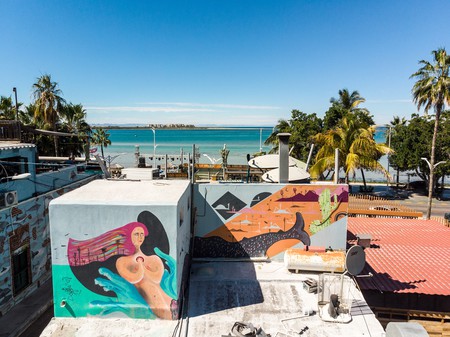 It happened over the course of two weeks. In March 2017, 26 artists from all over Mexico landed in La Paz and began to repaint 1,350sq m of the neglected buildings of its center.

The project is called Cuidad Mural (City Mural) and was conceived by Colectivo Tomate, a group of artists, lawyers, architects and designers from the city of Puebla, north of Mexico City. They realized that street art could be a tool to spark imagination, empower the disadvantaged and encourage locals to take pride in their city and culture. Their goal is to encourage people to re-appropriate their own public space and repaint it in their own image. 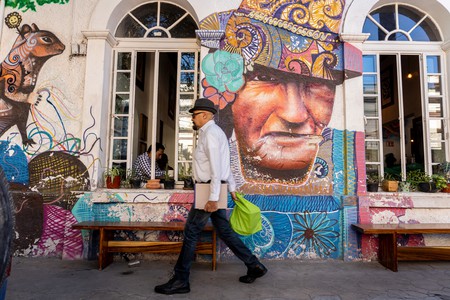 Initiated in 2009, Ciudad Mural has now illustrated colorful local stories in more than 16 Mexican cities, including Morelia, Zacatecas, Campeche, and others. In La Paz, they have been invited by the group Urbaneria. This urban agency, founded by the marine biologist and activist Lucia Corral, is also trying to inspire los Pacenos (the inhabitants of La Paz) to transform their public space using simple, non-expensive, and tactical actions.

“When the artists arrived,” recalls Corral, “we introduced them to the most emblematic people of the town: the fishermen, the local historians and journalists, but also to the beloved piano teacher.” Lots of civil organizations also participated. The NGO, Espiritu Santo es Parte de Ti even paid for the artists to take a boat trip to the island to see its mystic beauty. After a week, the crew, stocked with this narrative, emotion and collective fabric began to visually transcribe the most touching stories.

The pre-colonial legends filled the imagination of the artists. In the parking lot of the abandoned Burger King is a six-meter long, colorful mural created by the artist Koctel. It depicts a large seabird and fishermen with heads of fruit who are rowing their boat on a sea of orange juice. Inspired by his visit to the local anthropology museum, the artist wanted to depict how crucial fruits were to the survival of the fishermen of La Paz, constrained to live alongside a deserted cactus forest. 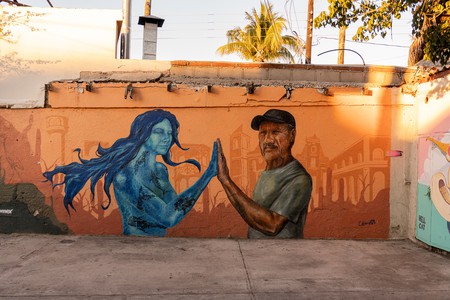 Living in the bay of La Paz has always required some imaginative innovations from locals. Thousands of years ago, most of the tribes who migrated south didn’t settle by the sea, but in the mountains where they found shelter, fresh water, fruit and livestock. The only group that lived on the coast were the Pericúes. Out of necessity, this group came up with a creative way to make fruit seeds nutritionally beneficial – they recuperated the tiny seeds of the pitaya fruit from their own feces, which had been improved from the fermentation of their digestive tracts. Once cleaned and reduced into powder, those seeds were used to make a drink. Called the ‘second harvest’ of the pitaya, this process is represented in one mural with a beautiful pink milkshake.

Each mural tells its own story of La Paz

As well as tales of suffering, many symbols of harmony have also been transmitted from that period. On the back of the Hotel Seven Crown, for example, an enormous painting features an indigenous boy helping a fish. This clown fish is painted in the form of a heart and is swimming towards the hands of the boy, which looks like a boat but also a shelter. His colorful, decorated head dress recalls the shape of an old scuba helmet and also the tail of a whale, symbolizing the locals’ relationship with the ocean. The mural was painted by the Metzican, a famous group of three artists from Toluca, known for their iconic indigenous figures all around Mexico. 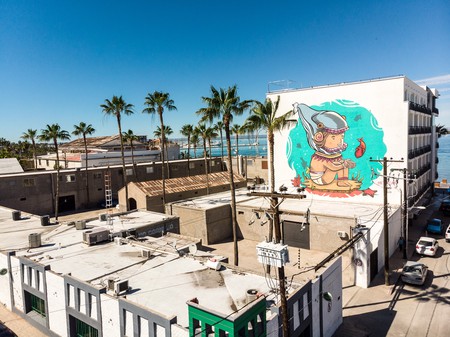 A few meters away, on the wall of the parking lot toll booth, a painting by Argeo contrasts with the previous idyllic vision. Aggressive sharks attacking a pirate ship represent the true relationship between men and the sea: chaotic, violent, and conflictual. The sharks symbolize the power of recuperation of the sea and the pirate ship is the march of humanity. By painting the back of the boat in flames and the sailors drowning, Argeo doesn’t seem to give many chances for the humans to recover from this ultimate battle. Titled The Act of Fishing, the mural recalls the darker history of Baja California, when pearls and whales were both reaped to the brinks of extinction. By 1950, there were no more pearl oysters in La Paz, and the grey whale population was left decimated. 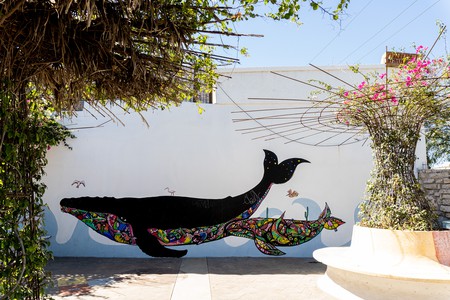 Fortunately, a figure of hope appears on the back of the adjacent parking lot in the portrait of a fisherman named Martin Mendes, from the fishing community of El Manglito. The image by artist BP Vinalay depicts the decision taken by 109 fishermen in the bay to stop harvesting the pen shell scallops to allow their recovery. With a candle on his hat, Martin is the figure of leadership, one who has been a key factor in the success of the project. A blue rope around his neck is attached to one of the motors of the fishing boats, symbolizing the communal decision. Twenty children from the Manglito community painted the divers on the boats, while BP Vinalay focused on painting the giant pen shells floating above a burning sunset. 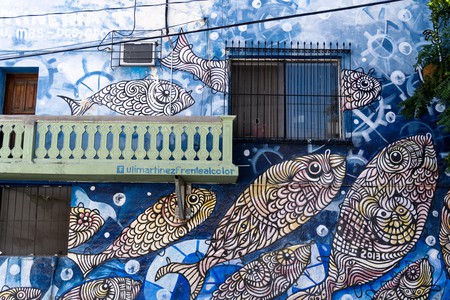 La Paz has a crucial relationship with the sea, something that was celebrated by ancestors in the area and still is by locals today. Visitors come now to La Paz for the aquatic biodiversity, sundry cultures, and profound history. This is what the project, Cuidad Mural, and the 300 people of La Paz who participated, choose to celebrate together.