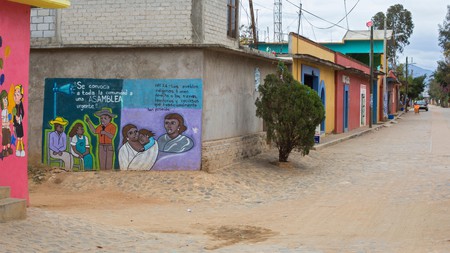 Artwork – like this one – is often used to promote the rights of indigenous people in Santa Ana Zegache, Oaxaca | © Jim West / Alamy Stock Photo

In the historic city of Oaxaca, you’ll find a group of graphic artists that are promoting the work of the area’s indigenous artists. Here are three young grabadores (printmakers) who make and sell their art at Taller Artístico Comunitario.

Deep in the historic center of Oaxaca, around halfway up the steep and narrow one-way street Calle Porfirio Díaz, is a small and unassuming graphic art – or grabado – studio that does things a little differently. Taller Arístico Comunitario champions artists from the remote indigenous communities of Oaxaca State.

Graphic art grabs attention all across Oaxaca City. Large posters of a print showing a shirtless Donald Trump being grappled and pinned down by Mexico’s silver-masked wrestling legend El Santo are plastered across the exterior walls of colonial buildings alongside the message: La Lucha Sigue (the Fight Continues). You’ll see murals depicting the ruggedly handsome moustachioed hero of the Mexican Revolution and a Latin American symbol for the advancement of peasants’ rights: Emiliano Zapata. Street art in Oaxaca serves as more than an aesthetic enterprise. It acts as a visual projection of the current political, social and economic problems that ordinary citizens face. It is an interlocutor between the voice of the people and the urban environment.

Rigoberto is a 20-year-old printmaker from San Pablo Guilá, a Zapotec-speaking indigenous community around 40mi (64km) from Oaxaca City. He’s been working at Taller Artístico Comunitario for the last two years. The walls of the studio are covered with closely hung woodcut and linoleum prints. In the corner are miniature versions of the same designs, but printed onto stickers, postcards and T-shirts. The lines that usually separate gallery, gift shop and studio blur seamlessly into one another.

Mariana and Eric, both printmakers, work in the same studio. Mariana, at 19-years-old, is fairly new to the grabado scene, while Eric, the oldest of the three, has been developing his craft at Taller Artístico Comunitario for the last seven years. “This studio has always been committed to producing artwork with a socio-political element, art that awakens conscience,” Eric said. “Since the boom of Oaxacan graphic art in 2006 that was closely connected to a series of protests and workers’ strikes, the kind of work we produce here has carried with it a political dimension. At the beginning, stencils were used because it was a fast and simple way of responding to the changing situation. Nowadays, the techniques of printmaking being used are different and allow for greater artistic expression.” Mariana agrees. She says that she believes that the art they produce has an important social message and that they are standing up for the rights of workers, women and indigenous communities.

Taller Artístico Comunitario is committed to supporting young artists from indigenous communities in Oaxaca. Almost all of the members of the studio (including Rigoberto and Eric) are from the communities. “We are united by the fact that we have emigrated from our communities to pursue the dream of becoming an artist,” Eric said. At least once a month, members of the studio will gather medium-density fibreboard, carving tools, ink and paper before travelling to an indigenous community in Oaxaca to give free printmaking workshops to children and young adults. These workshops are intensive and last for about a week.

“When we go into the communities, we identify certain individuals that show promise, then we invite them to this space,” Rigoberto explains. “Here, we give them everything they need: the tools, the space and the opportunity to develop their craft. To learn from people who have been doing this for 10, 15 or 20 years. Then, those very same people will return to their communities to give workshops and share what they have learned. I was one of those people scouted by the studio when they came to my San Pablo Guilá.”

There are 2020 calendars on sale at the back of the studio. The images that had been printed on the calendars included a scene of protestors with banners saying No Estamos Solxs (We Are Not Alone) and Latinoamerica a la Calles (To the Streets Latin America), an indigenous mother and child in traditional embroidered clothing and the very same print of Trump being wrestled to the floor by El Santo. Mariana says that reproducing their artwork in the streets is something that remains at the heart of Taller Artístico Comunitario’s values.

Rigoberto, Mariana and Eric discussed the content of their artworks. One of Eric’s pieces is titled Nuestros Cuentos Orales (Our Oral Tales). It depicts traditionally masked adults of the community telling tales to the children; fables and legends are not written down but passed on from generation to generation. With the crisis that indigenous languages are currently facing and high rates of illiteracy in Mexico’s indigenous communities, many oral histories will inevitably be lost. Eric created this piece in 2019 to mark the International Year of Indigenous Languages.

The artists receive all of the money from their sales; there are no middlemen or lost percentages. Mariana explains, “we receive 100 percent of the sales of our own pieces. With that money we pay our rent and eat. The only thing we really pay for is the paper we use. The tools, ink, classes and use of the space costs us nothing. We can come here to work even after it closes, sometimes I spend all night here working on a piece.”

The studio itself generates a modest income from the sale of calendars, stickers, T-shirts and postcards. All profits are spent on new materials for the artists. In comparison, most small galleries and studios in downtown Oaxaca pay the artists only a fraction of the sale. Taller Artístico Comunitario is very different from the other grabado studios. It is a place where the artists are valued irrespective of the price at which their work sells. It is a place where young and promising artists from Oaxaca’s indigenous communities can become financially independent grabadores. It is a place wholly committed to sharing a vision of social progress through art.