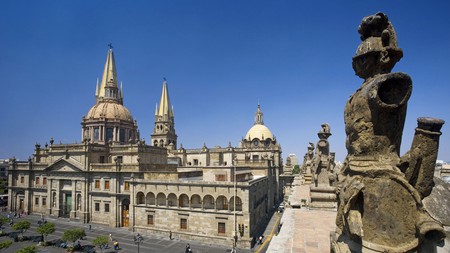 Dominated by a grand dual-spired cathedral, the historic center (Centro Histórico) of Guadalajara is the oldest part of Mexico’s second city. Of course, its size means the hotels on offer here are often fantastically cultural, meaning you can indulge in the rich tradition of the area even when you’re chilling at your basecamp. Want to know more? Here are the best cultural hotels in Centro Histórico, and they’re all bookable on Culture Trip. 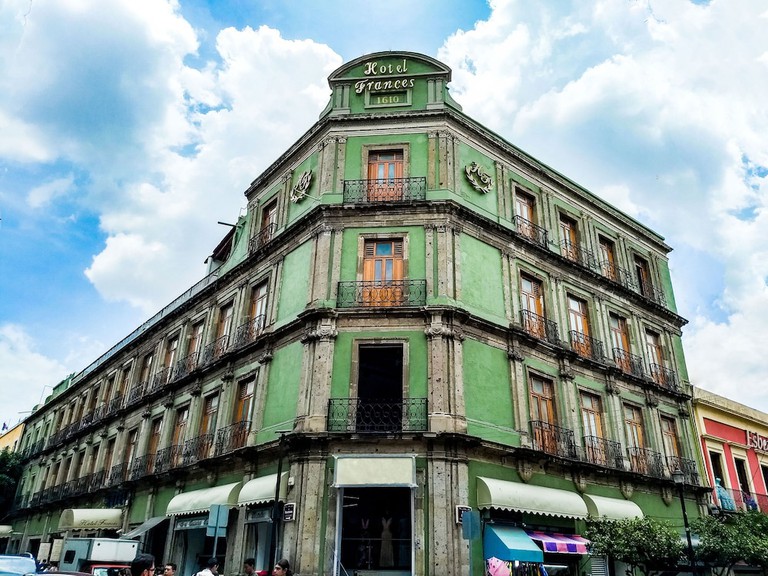 Courtesy of Hotel Frances / Booking.com
View Rooms
From $33 Per night per room
Step back in time with a stay at Hotel Frances. This historic property dates all the way back to 1610, and oozes character from the get-go with a colonial-style facade and a dramatic inner courtyard complete with a fountain and twinkling chandelier. Rooms are simply furnished but in a refined way, with tiled floors and classic wood furniture. Other perks of the place include an old-style elevator and a rooftop terrace with great views over the city.
More info 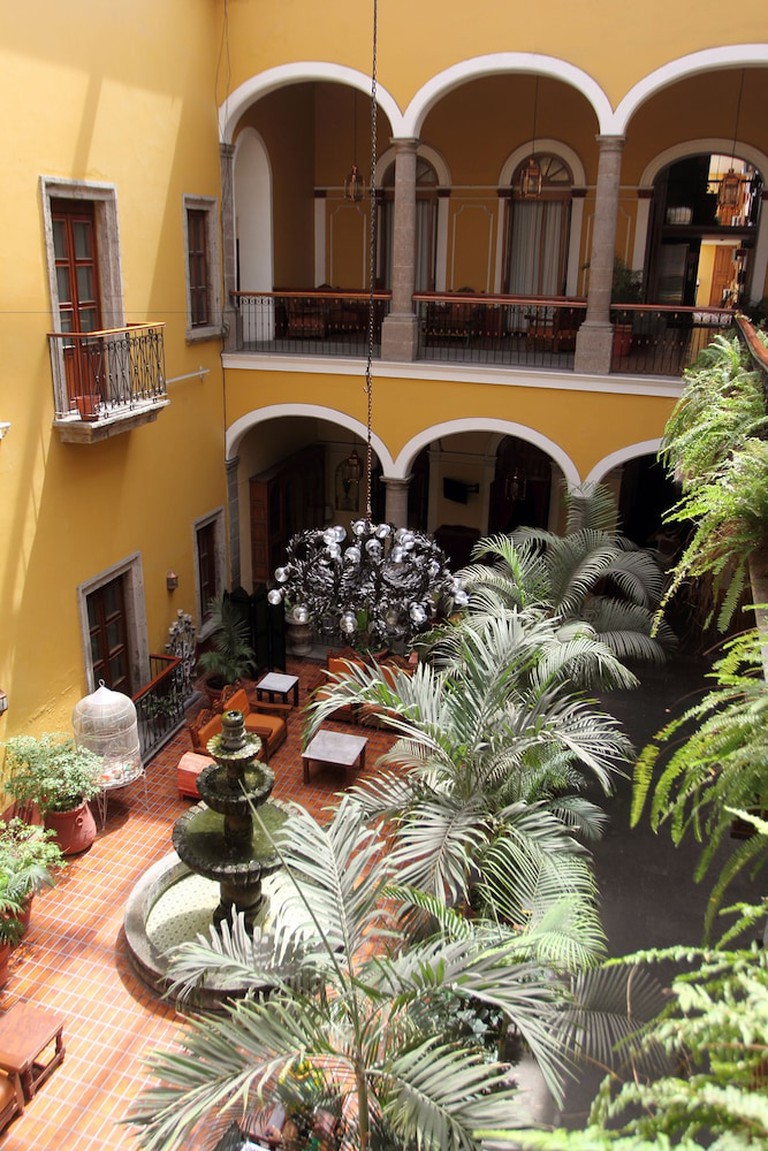 Courtesy of San Francisco Plaza Hotel / Booking.com
View Rooms
From $37 Per night per room
If you’re a fan of sunny patios, Spanish-style courtyards and lots of potted trees and plants, the San Francisco Plaza should hit the spot. This handsome building – not far from the Degollado Theatre and Cathedral – features inexpensive rooms (singles and doubles) brought to life with deep blue and wine-red colored walls. High ceilings make the rooms feel even more spacious. While not a luxury property, San Francisco Plaza offers a lot of cultural ambience, which should get you in the mood for exploring Guadalajara’s rich past. Fuel up for the day with a spread of homemade Mexican food at the Quijote Restaurant.
More info 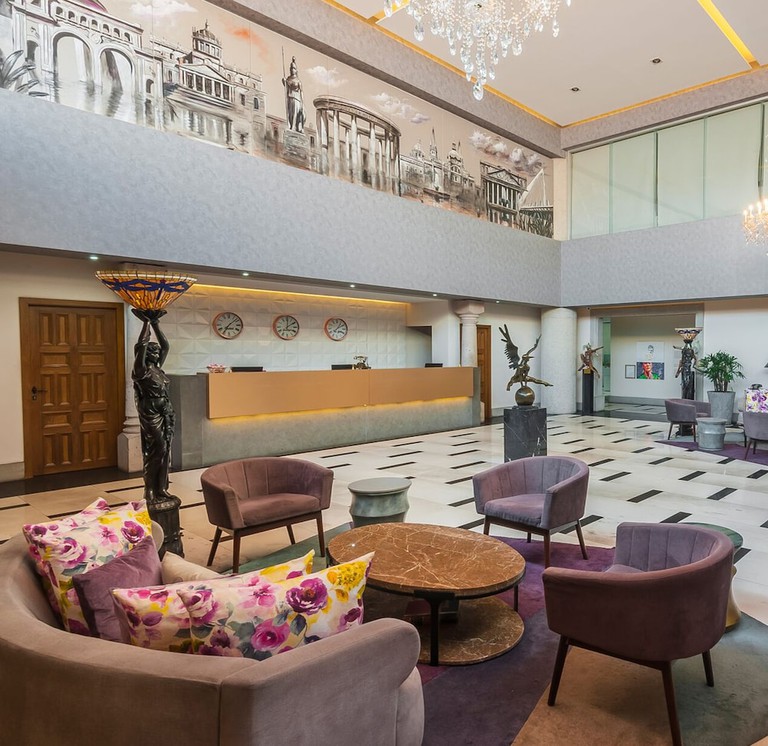 Courtesy of Hotel Real Maestranza / Booking.com
View Rooms
From $49 Per night per room
A hotel-cum-gallery, Real Maestranza is a great spot for art lovers. Two historic buildings serve as the hotel’s foundation with a modern structure jutting out. Art is big here, with large, multi-colored contemporary paintings, massive prints and imaginative sculptures by Mexican artist Jorge Marín found everywhere. The spacious single and double rooms flaunt a modern aesthetic, with wood-paneled walls and tiled floors. There are meeting rooms for those who are traveling on business, and other amenities include a good-sized gym, a restaurant and a cozy bar.
More info 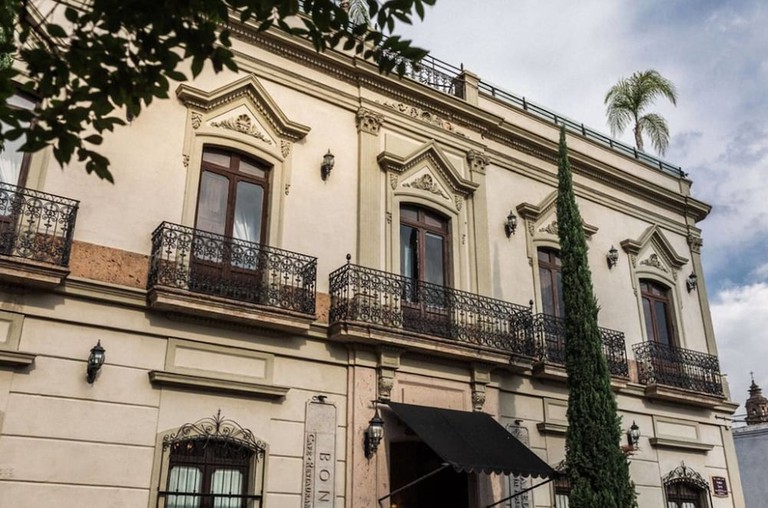 Courtesy of Casa Pedro Loza / Expedia
View Rooms
From $59 Per night per room
Casa Pedro Loza Petit Hotel is something special. Featuring eight guest rooms, three master suites, and one luxurious honeymoon suite, no two rooms are the same at this sumptuously decorated spot in the historic center of Guadalajara. The 19th-century colonial-style mansion was lovingly restored so that its original character remains. The place is awash with antique-style furnishings but contemporary touches cater to the 21st-century traveler. Breakfast is served in a delightful courtyard area.
More info 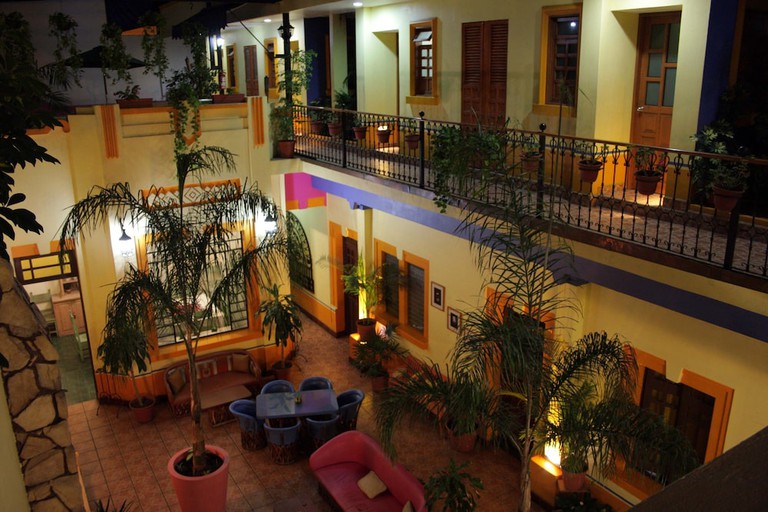 Courtesy of Casa VilaSanta - Hostel / Expedia
View Rooms
If you’re traveling on a budget and looking for the perfect traditional Mexican lodging experience, Casa Vilasanta is perfect for you. Excellently positioned between arguably the two most important areas of Guadalajara – the party avenue of Chapultepec, which has great restaurants and bars, and the cultural, historic center of the city, replete with impressive architecture – Vilasanta is bright and welcoming. Make the most of the spacious central patio to hang out with other travelers and soak up the vibrancy of this casa. As if that weren’t enough, if you’re planning on a long-term stay, they have great monthly rates on offer too.
More info 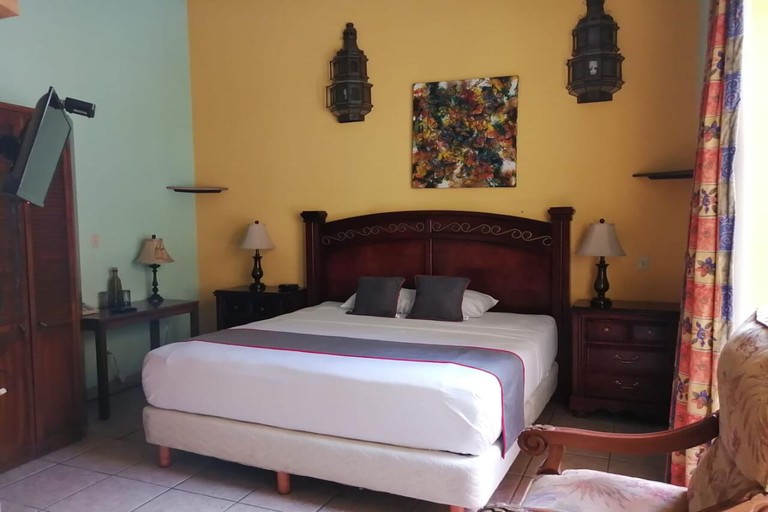 Courtesy of Alebrije Hotel Boutique / Booking.com
As charming as it is comfortable, Casa Alebrijes is a boutique hotel for “gay men and women and friends”, and is marketed as an inclusive, welcoming and incredibly well-located hotel in Guadalajara, known for being one of Mexico’s most gay-friendly cities. Situated in a converted 19th-century house, the existing architecture has been maintained and respected beautifully, but there is nothing dated about it. Instead, the tall ceilings and two-foot thick, brightly painted adobe walls are lavishly decorated with colorful Mexican artesanías, including the alebrijes (colorful Mexican sculptures of animals) from which the hotel takes its name. The central courtyard is the focal point of the property, around which all the rooms are arranged. For those looking to experience the gay scene in Guadalajara, look no further. 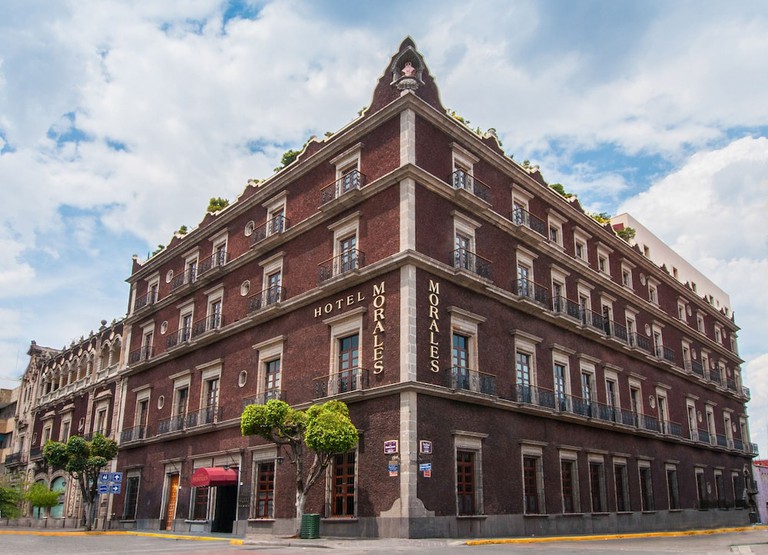 Courtesy of Hotel Morales Historical & Colonial Downtown Core / Expedia | Courtesy of Hotel Morales Historical & Colonial Downtown Core / Expedia
View Rooms
From $68 Per night per room
If you’re in Guadalajara specifically to soak up the architecture and history of the city, there is no better place to stay than Hotel Morales, which is located less than three blocks from the imposing and famed Guadalajara Cathedral, with its tiled yellow roofs and signature spires. Aside from its location, the name says it all about the breathtaking architectural prowess you can expect to find at this downtown hotel, in which each room has its own style and classical furniture. The building itself dates from the 19th century but was first converted into a luxury hotel in the 1930s. Without a doubt, those wanting to stay both in the historic center of Guadalajara andin a building with such history really need look no further than Hotel Morales.
More info 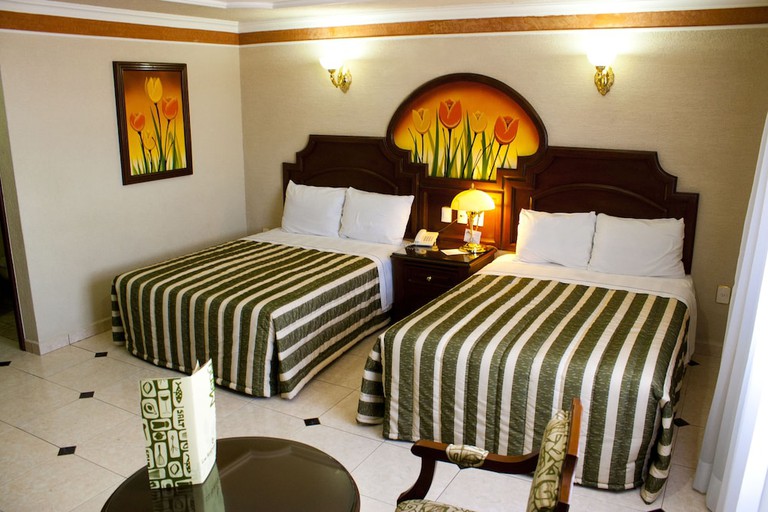 Courtesy of Hotel Casino Plaza / Expedia
View Rooms
From $36 Per night per room
If you’re simply looking for a budget base from which to conduct your cultural investigations of this magnificent city then Hotel Casino Plaza may just be the one for you. It’s clean, comfortable, and extremely well located – just a few blocks away is the cathedral and El Teatro Degollado. All the furnishings are in good condition, plus the staff are great, always on hand to help and give advice about what to see and do. While from the outside Hotel Casino Plaza may leave a lot to be desired, particularly if you’ve got your heart set on staying in a colonial old building while in the historic center of Guadalajara, the interior and the excellent value for money more than make up for that first impression.
More info 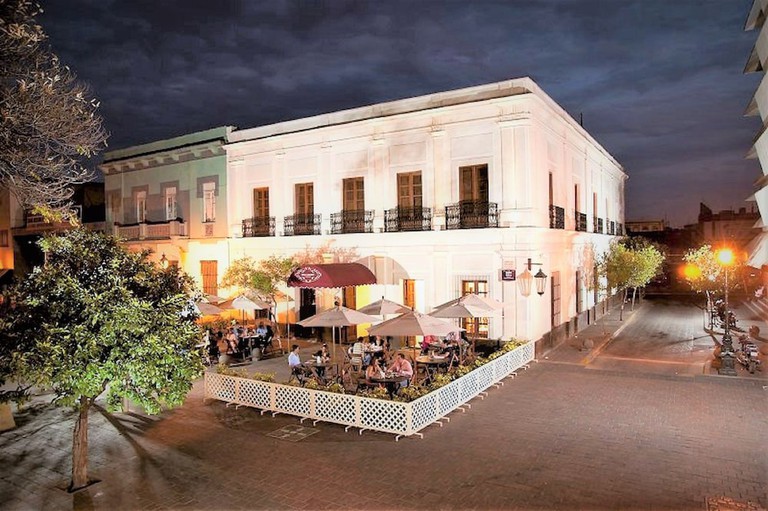 Courtesy of Del Carmen Concept Hotel / Expedia
View Rooms
From $55 Per night per room
Perhaps the description of the Del Carmen Concept Hotel offered on its website will give some indication as to what you can expect from this quirky gem in downtown Guadalajara: “Eclectic as the lost labyrinths in the lines of one’s hand”. Situated in a restored neo-classical hacienda, Del Carmen is sleek and imposing from the outside and artsy on the inside. This is to be expected given that the concept driving this hotel is a celebration of the greatest Mexican surrealist artists. Del Carmen is fantastic as it offers Mexican history, art, and culture all rolled into one quaint bundle, with an excellent historic central location. Not to mention the friendly staff are friendly and first-rate amenities.
More info 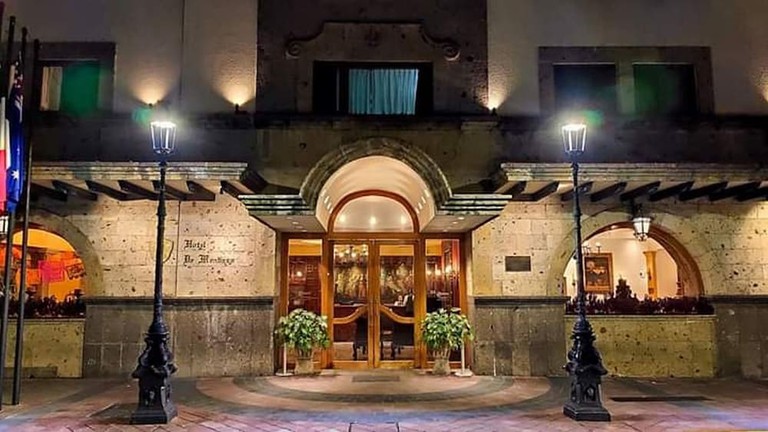 Courtesy of Hotel de Mendoza / Expedia
View Rooms
From $42 Per night per room
Another excellent option in the historic center boasting old-world charm, Hotel de Mendoza offers colonial architecture and décor which will please even the most cultured of culture fiends. The ample nature of the communal spaces in this decadent spot is also reflected in the spacious if somewhat dated rooms, which are clean and comfortable. Anyone worried about the language barrier, which can often be a problem in Guadalajara, shouldn’t be concerned about stopping at Hotel de Mendoza as the level of English spoken by the staff is excellent. Plus, they are always on hand to help you out with navigating your way around the city.
More info 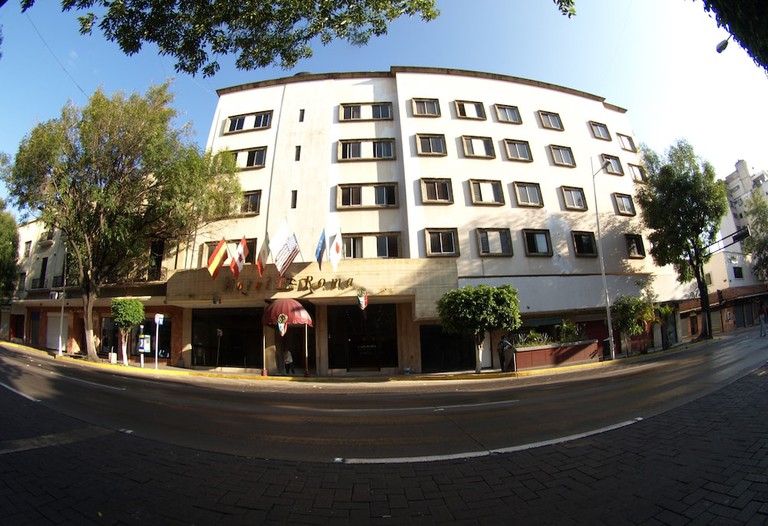 Courtesy of Roma Guadalajara in downtown / Expedia
View Rooms
From $50 Per night per room
Hotel Roma makes a great budget option with an optimum location in this culture-packed city. Getting stuck into the action is what Guadalajara is all about, and you’re halfway there if you’re already lodging in the historic center. Our top tip is to try and get your hands on a room with a view, to make the most of your architecturally impressive surroundings. Simple, clean and super-cozy, the bedrooms are perfect for short-stay visitors. Do take advantage of the temperate Guadalajara climate for a quick dip in the pool or enjoy a drink on the terrace with its stunning views out over the cathedral. The buffet-style breakfast is also a nice additional touch.
More info

This boutique bed & breakfast is situated a few blocks outside the historic center but is a fantastic option that we just had to include. Still easily within walking distance of all the major sights and sounds of the historic center, but with the bonus of being closer to Avenida Chapultepec too, La Perla is an upscale hotel. What’s more, it has a unique theme that sets it apart from the competition; rooms are categorized as radio, TV, or film, and the aim is to make you feel like a movie star from the golden age of Mexican cinema. You are truly transported back to the past in the Moorish mansion aesthetic of La Perla.