How, Where and When to See Whales in La Paz, Mexico 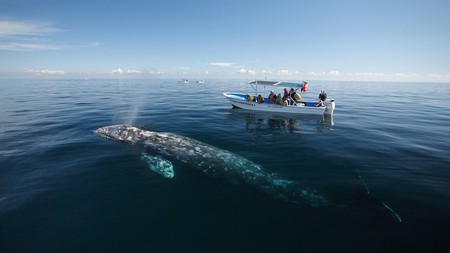 The seaside city of La Paz, the laid-back capital of Baja California Sur, is an excellent base for a whale-watching excursion. The calm waters in the Bay of La Paz make it easy to spot these majestic creatures, while the winter months bring migrating whales who come to the Gulf of California (also known as the Sea of Cortés) to give birth and mate. Plan your La Paz whale-watching adventure with our ultimate guide.

Have a close up encounter with whales off the coast of La Paz by embarking on a multi-day sailing adventure with Dream Yacht Charter.

Where can you see whales in La Paz?

The Bay of La Paz is a protected area, sheltered from the open Gulf of California by a spit of land known as El Mogote. From October to May, whale sharks – really sharks rather than whales – enjoy the warm waters here. A little further north, and a short sail from La Paz, is Playa Balandra, a protected crescent-shaped bay with pristine beaches fringed by mangroves – another prime whale shark-watching spot. Sail out of the bay and you’ll find Isla del Espiritu Santo, a scenic rocky island characterized by aqua-blue tides and dry rolling hills. It’s home to various wildlife species, including sea lions that laze on the shore. 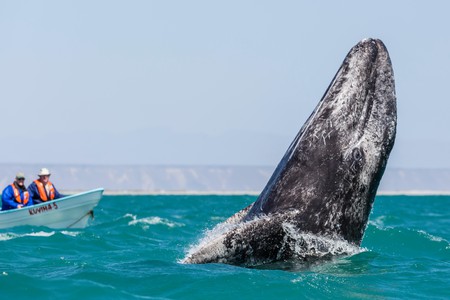 Excursions also run from La Paz to Magdalena Bay and Laguna San Ignacio, both on the other side of the peninsula. Here, gray whales (mothers and their calves) are regular visitors and are particularly friendly to humans in passing boats. Loreto is your best bet for spotting migrating blue whales, although it is a four-hour drive from La Paz or a couple of days sailing. Humpback whales pass Los Cabos, a two-hour drive or two-day sail south of La Paz.

What kind of whales can you see?

Gray whales migrate from colder waters to the Baja coastline every year to mate and give birth in the shallow waters. Traveling in pods, they venture 12,000mi (19,300km) from their home in Alaska to their winter retreat in Mexico. Their peaceful nature allows you to get close enough for a good picture. La Paz is also visited by migrating whale sharks – the largest fish on the planet, reaching 60ft (18m) long. They feed on microscopic plankton, despite their intimidating size, and have distinctive white spots on their backs. Juvenile hammerheads and curious silky sharks are also seen near La Paz. 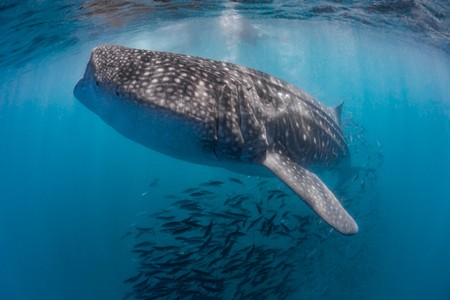 Other whales that visit the Gulf of California are blue whales – the largest on the planet – visible from March to July, although these typically swim out of the bay and further north in the Sea of Cortés. Humpback whales also pass through the Baja California waters and are often seen from Los Cabos – the tip of the peninsula.

When is the best time of year to see whales?

Hundreds of whales venture to the warmer climes of the Mexican Pacific coast during the winter months, so the best time of year for whale watching in La Paz is from November to April. During this period, the average temperature sits around 25C (77F), a beautifully balmy heat for a day of sailing. From October to April, seasonal north winds push whale shark food into the Bay of La Paz, where it collects just off El Mogote – the jutting spit of land that keeps the waters of La Paz so still. Whale sharks travel around 20,000mi (32,000km) from the Bering Sea to reach these waters. 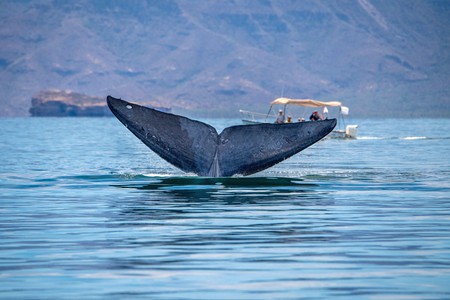 Visit the waters off Loreto to spot blue whales, the largest animal on the planet | © Andrea Izzotti / Alamy Stock Photo

Gray whales also travel from the Bering Sea, making the journey to Baja California to mate or give birth in the shallows. The peak time to see gray whales teaching and playing with their newborns is February, the height of the calving season. March is when the sea starts to warm, and the whales return to the colder waters.

Baja California is quickly becoming a crucial area for whale observation and conservation, and the whale tourism industry in La Paz is mindful of this responsibility. Tour operators make sure the whales are safe from the threats of fishing and collisions with boats. As a visitor, you can watch whales responsibly by picking a tour operator that uses certified captains and guides. There are many whale-watching excursion companies in La Paz, with licensed tour operators such as The Cortez Club, which offers responsible snorkeling with whale sharks in the bay, and Baja Adventure Co., which has onboard marine biologist guides. 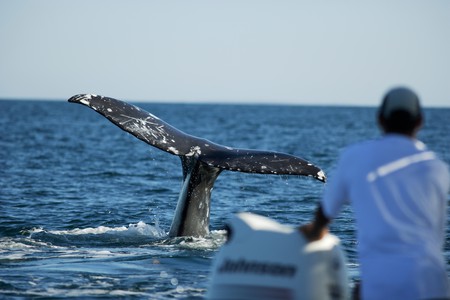 If you’re planning to charter your own boat, know that whale watching in the Bay of La Paz is strictly regulated. Operators must request permission to enter, adhere to rules on speed and time limitations. Boat captains should not actively chase the whales; rather let the animals approach the vessels by themselves. While whale sharks are not dangerous, they must be approached with care when swimming near them.

Meet some of La Paz’s largest residents by embarking on a whale-watching tour with Dream Yacht Charter.