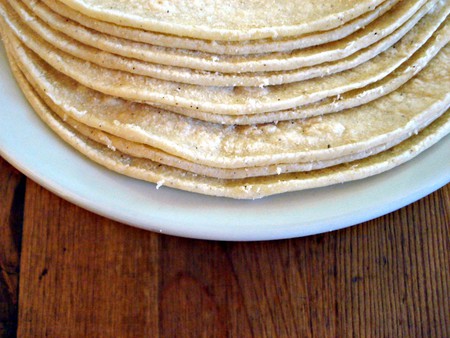 If you want to blend in with your surroundings in Mexico, the best thing you could do (aside from learning some of the most important slang) is eat like you belong there. There’s nothing that will make you stand out like a sore thumb in this vast and varied country more than wanting to sit down for dinner at 6 p.m.…although wearing socks and sandals is right up there, too. With that in mind, here’s everything the culture-conscious traveler needs to know about eating like a local in Mexico.

First of all, eat at the correct time. Many other countries, particularly western, non-Mediterranean ones, are accustomed to sitting down for a slap-up dinner at 6 p.m. sharp, if not before. However, if you turn up to a restaurant at that time in Mexico (particularly a traditional Mexican one, rather than one in a tourist heavy area), you might find you’re the only diners in there for the duration of starters, mains and desserts. Or, you might be more of an annoyance to the staff, who are trying to prepare for the evening rush. Ultimately, you should be dining around 9 p.m. if you want to blend in. As far as breakfast and lunch goes, many Mexicans will tuck into a light breakfast of pan dulce, fruit and café de olla as soon as they wake up. This tides them over until their ‘real’ breakfast at around brunchtime, or 10 a.m./11 a.m. Lunches, on the other hand, are enjoyed around 2 p.m./3 p.m. In general, the Mexican eating system goes from largest meal to lightest meal, in contrast to the typical western trend of eating little for breakfast and lots for dinner. 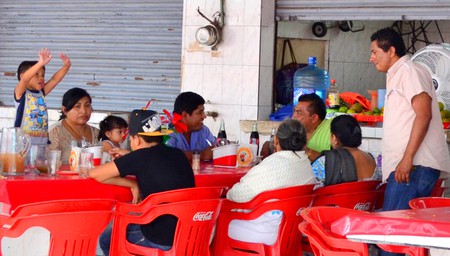 In the same vein, call your meals by the correct name. Breakfast is desayuno, your ‘proper’, heartier breakfast/ brunch is more of an almuerzo, whereas lunch is comida (hence the abundance of comida corrida places that only serve food from around 1 p.m.-4 p.m.) and dinner is cena. For almuerzo, egg dishes are very popular, as are things like chilaquiles and enchiladas, but you can read more about Mexican breakfast foods here. At lunchtime, many Mexicans will head to a fonda or comida corrida restaurant, where you’re served a very reasonably priced set menu that usually consists of soup to start, a main course accompanied by rice and, oddly, spaghetti, plus a small biscuit or jelly dessert and an agua fresca to wash it all down. Two of the most common aguas frescas are agua de jamaica (hibiscus flower) and agua de horchata. Alternatively, you can stop by any one of Mexico’s numerous street food stalls to pick up a lunch on-the-go. At dinner time, you’ll find many people often eat very light snack food rather than a proper meal, although dining out is still popular. Similarly, the ever-present street food stands will be busy around 9 p.m., serving people their tacos before bedtime. On the topic of snacks (botanas), snacking is practically a way of life in Mexico – vendors sell packets of crisps, nuts and dried fruit and dulces (sweets) at all hours of the day and night. 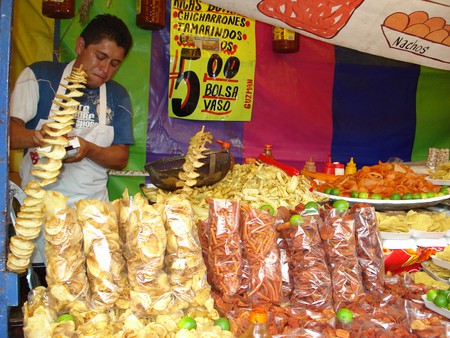 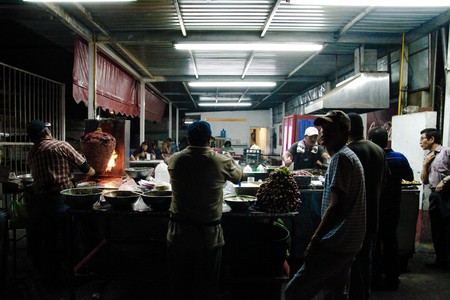 Unlike many cultures (Japan springs to mind), Mexican dining doesn’t have that much etiquette surrounding it. One of the biggest things to remember is to start every meal with a provecho, which is kind of like the Mexican equivalent of saying bon appetite to your dining party before you dig in. The phrase basically means ‘enjoy!’ and it’s also common to be told provecho from other diners as they pass by your table. Saying this to Mexicans will gain you some major brownie points at meal times. Equally, embracing the tortilla will also be a win for you. This staple part of Mexican cuisine accompanies practically any and every dish and sometimes subs in as a kind of edible fork; don’t fear your tortilla! Finally, as with many countries, tipping is important. A standard tip of 10% across the board will suffice, but don’t be afraid to give more for excellent service. 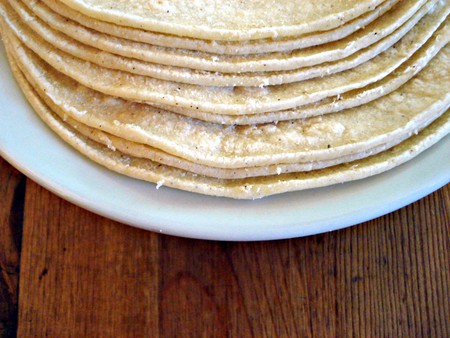 Tortillas | © cbertel/Flickr
Give us feedback