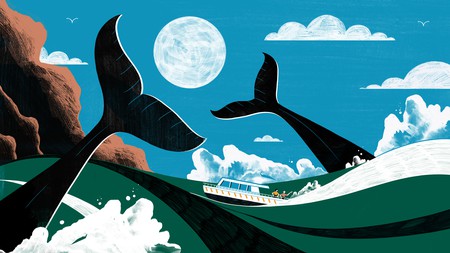 In Mexico’s Gulf of California, near coastal cities like La Paz, tourists can touch and pet gray whales. This rare opportunity for a connection between humans and the great ocean animal happened largely thanks to one local man named Pachico.

Surrounded by the desolate desert of Baja California, with its lands crystalized by salt and covered by tall cacti, Magdalena Bay’s vast body of emerald water is protected on both sides by two long, narrow and mountainous islands. Like steady guardians at the entrance of a temple, they shutter the giant swell of the wild Pacific Ocean here to create this quiet place, where the flapping of pelican wings is loud, the dunes move slowly and whales gracefully spout over the water’s surface. This is the secret breeding and nursing place of the California gray whale. 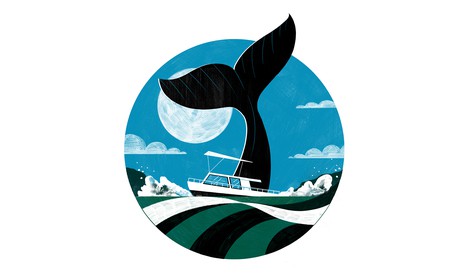 Near the entrance of the bay, where visitors can still discern tanks, boilers and other remains of an old whaling operation on the beach, two fishing boats drift with the current. A woman with a red hat and life jacket is stretching her entire body outside of the fishing boat, with one hand held out. “Hello, beautiful,” she yells. A juvenile gray whale has just appeared next to the boat, and the hearts of all the tourists on board are now beating hard. The 25-ton young whale is easily twice the size of the boat and is dancing under the fiber of its hull, tail down, slowly raising her head out of the water to glance at them with her baseball-sized eyes. Here in Baja California, the gray whales and humans have built a unique relationship. It’s not just whale “watching” – the two parties also interact physically, with playful games and even caresses.

Most of the tourists take this experience as a given, without realizing that this behavior is only 45 years old. Once upon a time, whales attacked ships in a war-like retaliation for the whaling that took place in this very bay. So why have the gray whales become friendly?

The California gray whales once had their own Captain Ahab

The relationship between humans and California gray whales didn’t start off too well. When the American whaler Charles Scammon discovered their hidden breeding lagoons in 1857, he and his crew managed to slaughter half of their population over a four-year period. The California writer Wesley Marx wrote a very informative and descriptive article on the subject in American Heritage (1969, Vol. 20, Issue 4) based on the actual whaling journals of Scammon (1853-1863). He says that the lagoon whaling practices decimated 10,800 gray whales between 1857 and 1861 (over an estimated pre-exploitation population of between 15,000 and 24,000 animals).

At the time, the gray whales were not a commercially prized species because, at 40-50 feet (12-15m) in length, the blubber used to make lamp oil yielded only 40 barrels: merely half the yield of a 60-foot (18m) sperm whale. Their baleen (filter-feeding system) was also too coarse to be used commercially as whalebone for corsets and buggy whips. Scammon’s motivation to come to Baja California to hunt the gray was driven by despair. He had been at sea in the Pacific for six months and was preparing to return to San Francisco with empty barrels. As he knew he would not be able to pay his crew, he proposed to his men a last attempt to fill his boat with oil: heading south to hunt the gray whales in their nursing lagoon of Baja California.

Arriving at the destination, Scammon managed to sail in the lagoon though the narrow pass and send in the first whaleboat. At first, the gray whales defended themselves furiously. Since they were attacked directly in their nursing lagoon, they could not dive deep enough to escape the harpoons. So instead they used their tails to destroy the whaleboats, leaving the men floating on remaining planks with broken legs and twisted arms. And before a whale could be harpooned, two or three whaleboats were destroyed by a succession of flashing flukes. “When the first boat arrived with her freight of crippled passengers,” described Scammon in his journal, “it could only be compared to a floating ambulance crowded with men as the uninjured supported the helpless.”

Scammon realized he was at a pinch point. Either he had to find a way to hunt the gray whales without losing whaleboats and men, or it would be the end of his career. From that point onward, whale hunting became a ruthless slaughter, and Scammon became like Captain Ahab, the fictional whale hunter of the novel Moby Dick. Instead of pursuing the mothers and pregnant whales, he began to ambush them with firearms and even bombed them, leaving the bay full of floating carcasses.

When the International Whaling Commission (IWC) finally started protecting the gray whale in 1946, there were only 5,000 gray whales left on the entire Pacific Coast.

Silence eventually returned to the lagoons, but the sadness caused by the past barbarity lingered. With the fright of their slamming tail in mind, the local fishermen tried to avoid the mother whales. Each time one of the animals came close to a boat, the men would pick up a piece of wood and bang it on the side of their ship to scare them away. One day in 1973, a man by the name of Francisco Mayoral, known as “Pachico,” decided to change this relationship. 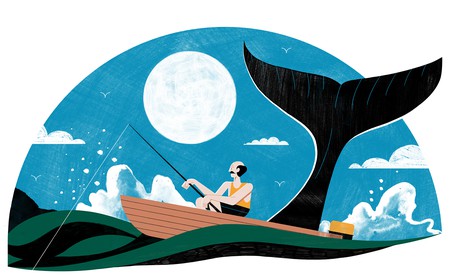 Born in the Gulf of California, Pachico was working on a ship moving minerals from Santa Rosalia up to Washington State (US), but each time he had a vacation, Pachico would travel to the Laguna San Ignacio where he knew the families of the fishermen who lived there. One Sunday, as he was fishing with one of their relatives, drifting with the current, a whale suddenly appeared a few feet from the boat, lifting her head out of the water. “I was terrorized,” recalled Pachico when I interviewed him in 2009. “Suddenly, the whale began to push the nose of the panga and the boat began to go sideways.” The animal slid back in the water, and for a moment they thought she was gone, but she then reappeared on the other side of the boat. This hide-and-seek game lasted half an hour – enough time for the men to calm down. Finally, the whale got so close that Pachico held out his hand to touch her. “First, I went very softly,” he recalled. “Her skin felt like neoprene. Then I put a little more strength to my caress and she stayed another half an hour to be touched.”

When he came back to shore, nobody believed he had touched a whale, but Pachico was forever changed. Bonding with this giant marine mammal, after being so scared of her, touched him deeply. Though we can’t know for certain at what point in time attitudes changed between the two species, this moment for Pachico was clearly evidence of a new relationship between whales and humans in the area.

How to have a whale friend

Pachico settled in the lagoon, got married and dedicated his life to the whale-watching. It took him and his family ten years, with the help of the team at the Dana Wharf sport-fishing teams who would come from San Diego with their own boats, to understand how to interact with the gray whales. Should they approach them from the front or on the side? Should they wait for the whales to come to the humans or try to approach the animals themselves? Are there some parts of the body they shouldn’t touch: the eyes, their breathing orifices, or the tail? Many nuances were learned during that decade. With the help of a team of researchers, Dr Steven Swartz and Mary Lou Jones conducted the first systematic studies of gray whales in Laguna San Ignacio from 1977 to 1982. Among other things, they learned to recognize the individual whales by the marks on their bodies and also by their comportment, or personality.

Slowly, approaching the gray whales began to be a tourist attraction. Fishermen who knew the whales began to take tourists out in their panga with the hope of touching the whales. Some whales didn’t want to be touched and stayed away. “They’re still wild animals, and that is what makes the encounter so magic,” explained Jesus (Rana) Mayoral, the son of Pachico, when I interviewed his father.

“The whales are like individuals,” Rana continued, with as much passion as his father. “Each has its own way to be, and it’s very hard to generalize.” Some come to the boat to be touched, even bringing their calf with them toward the tourists. Others play by splashing the tourists with their tail or pushing the panga with their nose, like the whale of Pachico.

After five decades caressing the whales, it finally became clear to Pachico why the gray whales became friendly. “The whales are here to teach us how to behave between species,” he told me in 2009, “and remind us that the world is for all of us.” Pachico, the “grandfather of the whales,” died in 2013.