The Most Affordable Winter Vacation Destinations in Canada 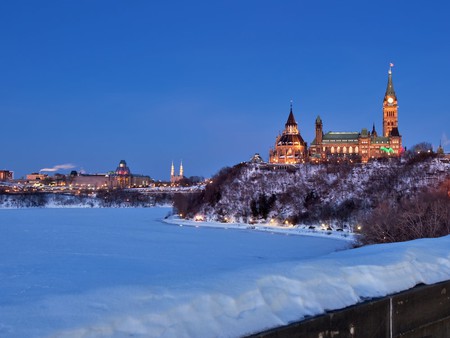 Some people might shy away from visiting Canada when temperatures start to drop. But it’s a fantastic winter vacation destination. There are world-class ski resorts, beautiful snowy cities, and fun festivals to enjoy across the country. Here are the most affordable places to visit in Canada this winter.

Québec City always has a romantic quality, thanks to European-style architecture and cobblestoned streets. When it’s blanketed in snow, this feeling is only intensified. Fortunately, a winter weekend in Québec City can be affordable. Wander through Old Québec, which is a UNESCO World Heritage Site, and the only fortified city north of Mexico. It sparkles at night during the holidays, and is home to Christmas markets and activities. There are also four different ski resorts near Québec City, and it hosts the world’s largest winter festival (aptly named Québec Winter Carnival).

Getting there: Most major North American airlines fly direct to Québec City.

Where to stay: Royal William Hotel is a good budget hotel option, within walking distance to the city’s main attractions. For backpackers, Auberge Internationale de Québec is a hostel located within Old Québec. 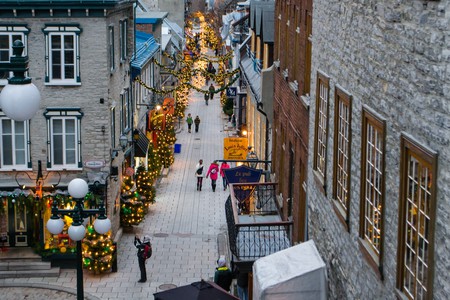 The nation’s capital is a great place to visit in winter. Ottawa is known for its Rideau Canal Skateway, which is a UNESCO World Heritage Site, and one of the world’s longest natural ice skating trails. The city is also home to some of the country’s best museums, which are the perfect places to explore in winter. Time your trip to coincide with Winterlude, which the Department of Canadian Heritage established in 1979. Expect snow sculptures, family events, and ice carving competitions.

Getting there: All major airlines fly to Ottawa. It’s also located two hours west of Montreal, and four hours northeast of Toronto. There are daily buses from these destinations.

Where to stay: Have an unique experience and stay in one of Canada’s most haunted places, the HI Jail Hostel. Here you will sleep in an actual former prison cell.

Although Whistler is undoubtedly the most popular (and biggest) ski resort in British Columbia, it isn’t exactly affordable. So why not spend winter in another adorable ski town? Nelson is a small BC town filled with historic buildings, independent boutiques, outdoor clothing stores, and too many dining options. It’s also only 20 minutes from Whitewater Ski Resort, which has reasonably-priced lift tickets and receives 12 metres (40ft) of snow annually.

Getting there: Nelson is located in between Calgary—618 kilometres (384 miles)—and Vancouver—658 kilometres (409 miles). However, it also has a regional airport, which you can fly into from these two cities.

Where to stay: Dancing Bear Inn is a hostel perfect for budget travellers, while The Adventure Hotel has deluxe, economy, and budget accommodation options too.

Charlottetown is the capital of Prince Edward Island, and a lesser-known place to spend a winter vacation. The small city has the perfect combination of indoor and outdoor activities to enjoy. Firstly, warm up with a hot drink from one of the city’s best cafés on Victoria Row. Then head outdoors and skate at the Founder’s Hall Rink, walk through a winter wonderland at Victoria Park, go cross country skiing, attempt outdoor winter yoga, or attend the Jack Frost Children’s Winterfest. Winterdine is also Charlottetown’s annual dining festival.

Getting there: From New Brunswick, take the Confederation Bridge to Prince Edward Island. Alternatively, Air Canada flies to Charlottetown from Halifax, Montreal, Ottawa, and Toronto.

Where to stay: The Harbour House is a well-priced bed and breakfast, with excellent reviews. Its rooms range from standard rooms to studios to executive suites, which suit all budgets. 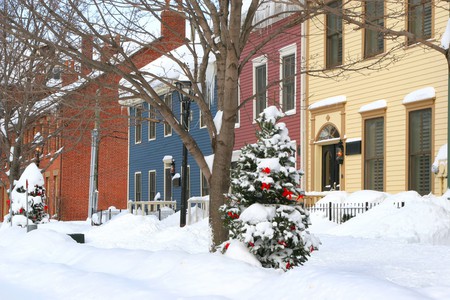 Vancouver Island isn’t an obvious winter destination idea, but it does have a lot to offer. For example, Tofino is a storm watcher’s paradise from October until April. Skiing is available at Mount Washington Alpine Resort. Victoria’s historic buildings also look good in every season. Plus, the award-winning Butchart Gardens transform during the holidays. The gardens are covered in lights to celebrate Christmas, which is a great place to visit with the whole family.

Getting there: Ferries are available from Vancouver to Victoria and Nanaimo, and are the cheapest option.

Where to stay: Tofino Harbourview Motel is a great budget hotel option. In Victoria, there’s one hostel named Ocean Island Inn, which has a perfect downtown location. 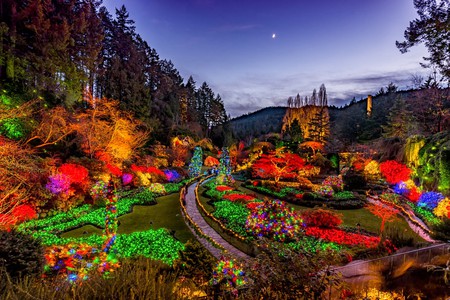 The capital of Manitoba, Winnipeg does get cold in winter. But visiting during this freezing time also means ice skating along the naturally frozen Red and Assiniboine rivers, and experiencing Festival du Voyageur. The latter is Western Canada’s largest winter festival, which takes place every February. While in Winnipeg, warm up inside at The Forks Market and the Canadian Museum for Human Rights.

Getting there: Many major US cities have non-stop services to Winnipeg, such as Las Vegas and Chicago.

Where to stay: There are many renowned hotel chains with inexpensive rooms in Winnipeg, such as Holiday Inn, Best Western, and Hilton Garden Inn.

Banff is one of those places that’s beautiful, no matter the season. Fortunately, a visit in winter doesn’t have to blow the budget. There are plenty of hotels and cheap activities to enjoy within Banff National Park. These activities include visiting frozen Lake Louise, warming up in Banff Upper Hot Springs, or skiing/snowboarding at one of the region’s SkiBig3 ski resorts. Canmore Nordic Centre is also a must-visit for cross country skiing enthusiasts.

Getting there: Banff is less than an hour and a half from Calgary. There are daily buses and shuttles connecting the two areas.

Where to stay: Samesun Banff is the best backpacker hostel in town, while Homestead Inn is a small, budget hotel alternative. 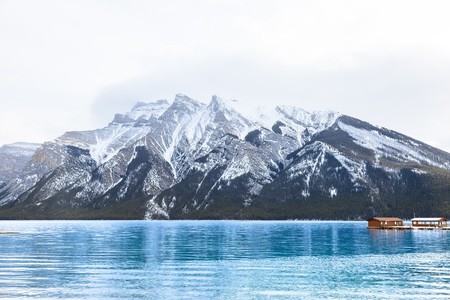 Skip over Toronto and instead head to the Niagara region in Ontario. Niagara Falls hosts the Winter Festival of Lights annually, which is one of North America’s most breathtaking light displays. There’s also a skating rink in front of Niagara Falls City Hall. In Niagara-on-the-Lake, go on a winery tour and sample the region’s famous icewine. Alternatively, bundle up and enjoy a carriage ride around one of Canada’s prettiest towns.

Getting there: Niagara-on-the-Lake is conveniently located an hour and a half from Toronto, and 45 minutes from Buffalo in New York.

Where to stay: South Landing Inn is a small bed and breakfast with reasonable prices and excellent reviews. 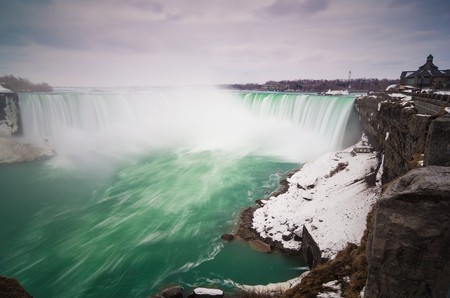 St John’s looks magical blanketed in snow. Take photos of the colourful houses along Jellybean Row, go cross country skiing at Pippy Park, zipline in nearby Petty Harbour, and skate at Bannerman Park, before enjoying a BeaverTail afterwards. Spend some time indoors, too, at one of the many restaurants and bars along lively George Street.

Getting there: It’s easy to get to St John’s from Canada and cities across the Atlantic, thanks to regular flights with Air Canada, WestJet, PAL Airlines, and Air Transat.

Where to stay: St John’s has many reasonably-priced guesthouses spread across the city, which exude that home-away-from-home feel. Cabot Guest House is a good choice. 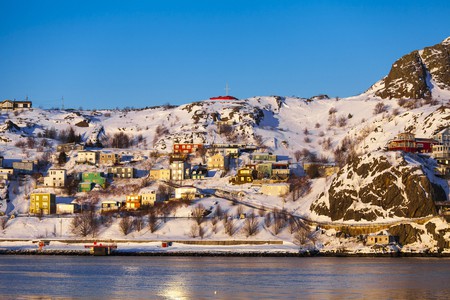 Vancouver on the west coast experiences some of Canada’s mildest winter weather, which makes it a perfect winter destination. The city looks breathtaking surrounded by the snowy North Shore mountains. Popular activities include visiting the German-inspired Vancouver Christmas Market, skiing at one of the three nearby mountains, seeing the Christmas lights take over Stanley Park and VanDusen Gardens, and going on a day trip to picturesque Whistler.

Getting there: Vancouver is easily accessible from many major US cities.

Where to stay: Like its Banff counterpart, backpackers will love the Vancouver version of Samesun. The hostel is located on Granville Street, the city’s downtown entertainment and shopping district.