These Amazing Travel Photographs Were Taken on Google Street View 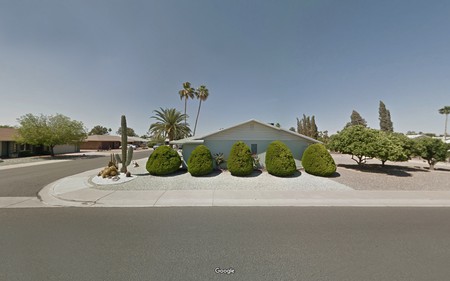 All in a Row, Sun City, California | © Jacqui Kenny

Looking at photographer Jacqui Kenny‘s work, you’d think she was one of the most well-travelled people on earth. She is, but not in the way you might think. Kenny is agoraphobic, hates open spaces and travelling on public transport. All her pictures were taken at home on Google Street View.

While the world is Kenny’s muse, the internet is her camera. It allows Kenny to cross thousands of miles with the click of a button to places like Peru, Kyrgyzstan, Chile and North America, just some of her favourite destinations to capture. Kenny’s skill as a photographer and unusual condition, which affects approximately 1.7% of the population, has earned her a sizeable online following.

Kenny spends days trawling through Google Street View. The feature of Google Maps and Google Earth, launched in 2007, lets people see any street on the planet as though they were standing there themselves. Creepy, but also useful for agoraphobics like Kenny.

Kenny became the Agoraphobic Traveller by chance. She was, as she puts it, just ‘playing around’ on her computer and making snapshots of what she saw. Her sister encouraged her to continue. Kenny particularly likes photographing towns in deserts, coastal regions, or mining areas and on the rare occasion she takes a virtual trip to a city or urban area, she finds herself wandering on the outskirts, where life moves a bit more slowly. ‘I wanted to convey a sense of isolation but combine that with beauty,’ she writes.

A post shared by Agoraphobic Traveller (@streetview.portraits) on Jan 1, 2017 at 1:52pm PST

‘It didn’t take long to realise that there is so much potential with Google Street View, you just need the time and the patience to find the hidden treasures,’ Kenny tells Culture Trip. ‘When I find an area I like, I do not give up until I find something special. It might takes days but it’s usually in there somewhere.’

‘Some of my inspiration for places and style has come from a few of my favourite photographers and artists such as John Divola, Stephen Shore, Peter Granser, David Hockney and Massimo Vitali,’ she says. ‘I’m also a big movie fan, so always looking out for a cinematic shot.’

Kenny says she regularly receives letters from fellow sufferers around the world. She recently hopped on a plane, and when she did, was flooded with supportive messages. At its most severe, the chronic disorder can force individuals to stay home altogether, though many people seek treatment and try to live normal lives. Others are drawn to her work for its tragic sense of voyeurism. A world of opportunities just out of reach.