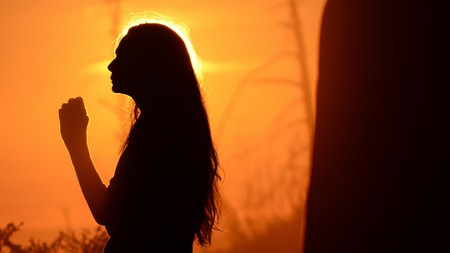 The great Swedish actress tells us about her latest movie—and shares her thoughts on the uses and abuses of power.

Now and again, Lena Olin gives a film performance of such valkyrie-like power that it’s a mystery Hollywood hasn’t created several franchises for her. Could it be that the Swedish actress’s intellect, beauty, and dynamism combined show up the conventional “strong woman” archetype in post-1990 American movies as something of a sham?

Suppose Olin, just for the sake of argument, had played Ravenna in the Huntsman movies, wouldn’t her earthiness have militated against the evil queen’s destruction in each film? Suppose Olin had played Hippolyta, the title character’s mother in Wonder Woman, would we have even noticed Gal Gadot?

I don’t want to suggest that Olin is too forceful to play supporting parts, or that she’s an ungenerous team player. She’s certainly not showy and she’s as good at vulnerability (see 1989’s Enemies, A Love Story) as she is at ball-busting (see 1993’s Romeo Is Bleeding). It’s more that her acting gets at the quick of life, its raw emotion, in a way that’s often at odds with Hollywood artifice.

In Olin’s latest film, poet Zach Cotler and Magdalena Zyzak’s English-language drama Maya Dardel, she plays the raspy-voiced title character—a celebrated poet and novelist living alone in California’s Santa Cruz Mountains. She announces during a National Public Radio interview that she is going to kill herself. It’s not a cry for help but a cold statement of fact—or, perhaps, a put-on.

Maya interviews a string of young male writers for the position of her legatee and literary executor. Most of the applicants have to prove their worth to the tyrant by reading her an excerpt from their work and pleasuring her with their tongues. The two finalists are an insufferable alpha male wannabe (Alexander Koch), who rapes Maya, and a milquetoast mother’s boy (Nathan Keyes), who manages to avoid sexual contact with her. Rosanna Arquette plays Maya’s eccentric neighbor and confidante—or is she her enemy?

Maya Dardel is a playfully philosophical enigma dominated by the lioness in the leading role. When Culture Trip caught up with Olin recently, it seemed fitting that she should be playing another indomitable woman, Martha in Edward Albee’s Who’s Afraid of Virginia Woolf? —her first stage performance since 1991. The play, which runs through December 10 at Stockholm’s House of Culture & City Theatre, is directed by Thommy Berggren. He appeared in the play’s 1963 European premiere, which was directed by Ingmar Bergman—later Olin’s mentor—at the Royal Dramatic Theatre, also in Stockholm.

CULTURE TRIP (CT): Was Maya Dardel written for you?

LENA OLIN (LO): I’m not sure. I think Zach [Cotler] should answer that, though I think he said, when he approached me, that he had written it with me in mind. That’s what I would do, too, if I had no money and had a great part and wanted an actress! [laughs]. Yeah, let’s ask him. 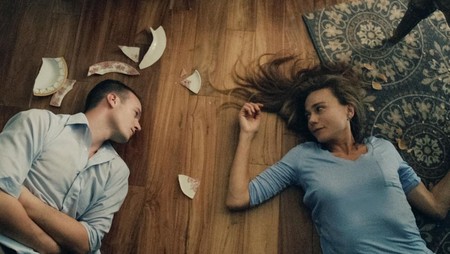 CT: Did you and the directors talk about the psychological reasons Maya is going to commit suicide—assuming she’s serious about it?

LO: Zach pointed out that we do not know if that’s what she’s actually planning to do. He talked a lot about the decline of her ability to write as well as she used to write, and I think that’s what dies. There’s a scene where she talks about beauty and how wonderful it was when her thinking was at its peak and she was at the top of her game in her thirties, and how it felt to constantly be able to think the way she could think. It meant so much to her to have that intelligence, but now that she’s slower—that’s a big part of her sadness. She’s very honest with herself about the decline in her writing.

LO: That is so beautiful. That’s Maya’s pain right there. I think actors are luckier, though it’s kind of bizarre. Our outsides decline [laughs], but the longer we live and the more experience we have, the more equipped we are to use ourselves to portray other people.

CT: Maya asks Ansel—and it’s a line you could miss if you’re not paying attention—if he knows about ovarian insufficiency. It made me wonder if she’s long been grief-stricken over her childlessness

LO: I haven’t thought about that, but I think it might be true of her, and Martha in Virginia Woolf, too. I do believe Maya’s insistence that Ansel treats his mother cruelly on the phone comes from [Maya’s] pain. That’s something that Zach and I didn’t talk about much. It was mentioned but we just let it be. There’s a motherly thing in her relationship with Ansel that she must have been lonely for. She trusts him and she’s touched by his talent, and even though she’s cruel to him, she gives him a great legacy. 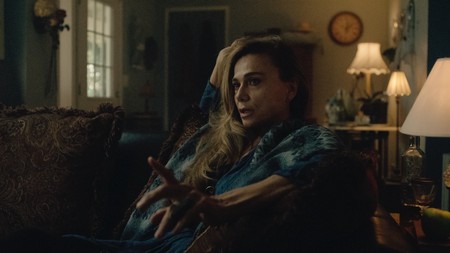 CT: If this film was about an older male poet choosing his executor from young women applicants, it simply wouldn’t work. Maya’s assertion of her female power over these two young men, particularly over Paul, who is more sexual and aggressive than Ansel, feels original. But it’s not all positive, is it?

LO: We talked about that on set sometimes. Had it been a male poet handling young women the way Maya handles Ansel and Paul, it wouldn’t have been unusual. The fact that it’s a woman makes it different, but the way she behaves is certainly not okay. Now there’s a new big scandal [a reference to the allegations against Harvey Weinstein], we’re reminded of how men often abuse their power, but I don’t think we realize there are plenty of examples of women behaving the way men sometimes do. It’s horrible the way Maya treats these men.

CT: Women have eroded the power imbalance between the sexes in the last fifty years. Do you have any thoughts about the need for women to control the power they’ve gained judiciously?

LO: Not really, because I think we are still so far from that [equality]. Women are allowed to handle power differently, the way men handle power differently. Some men handle power beautifully, as do some women who use power to create and to open doors for other women. Obviously there are women who have a lot of power who turn into power-hungry beasts the way a lot of men have done. It doesn’t matter if you’re a man or a woman. Power is dangerous if you abuse it. 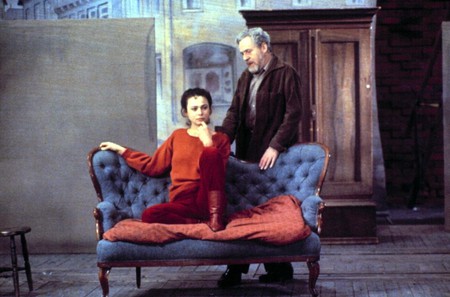 AFTER THE REHEARSAL, (aka EFTER REPETITIONEN), Lena Olin, Erland Josephson, 1984

CT: How important was Ingmar Bergman’s mentorship to you? I imagine you couldn’t have had a better start to your career.

LO: That’s true. My parents [Britta Holmberg and Stig Olin] were actors, and my dad worked in a lot of early Bergman films. When I was just a teenager, I was an extra in Bergman’s Face to Face [1976], and he got a hold of me and said, “You need to try out for drama school [the National Academy of Mime and Acting in Stockholm], and you need to get in there, and that is what I did. After I left drama school, I started working at the Royal Dramatic Theater, and I was in Bergman’s Fanny and Alexander [1982] and After the Rehearsal [1984]. I didn’t think much about it then, but now that I look back, it was extraordinary to start out that way. The way Bergman talked to me, the way he saw me, the way he projected me, that was extremely important.

CT: Do any of Bergman’s ideas—thoughts about acting—still resonate with you all these years later?

LO: It’s hard to say specifically. You learn something from all the good directors and actors you work with, and you incorporate it—it’s an extremely cool part of what we do—but it’s hard to point out what you get from different people. Certainly there was an integrity about Bergman, and I think he was very worried when I started working abroad.

CT: Do you hold [Philip Kaufman’s] The Unbearable Lightness of Being in great affection? I can see you having an affinity with Milan Kundera’s novel. Sabina, your character, is as sexually and intellectually independent as Tomáš [Daniel Day-Lewis]—if anything, she’s freer than him. What a role model she was.

LO: It’s very close to my heart. I live in New York now, and sometimes I bump into people in the street and they will be like, “Oh, my God, The Unbearable Lightness!” There was just something about it—Daniel [Day-Lewis] and Juliette [Binoche] were still more or less at the beginning of their careers, and I remember it was a six-month shoot, which is unheard of these days unless it’s a big action movie. It would never happen now for a story about four European lovers. I think it was a film that meant a great deal to a lot of people and that makes me very happy and proud. 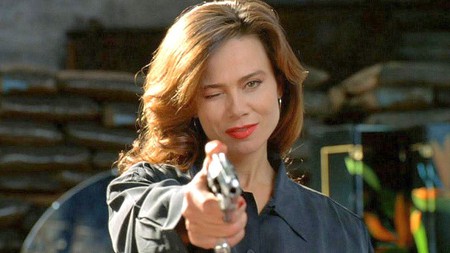 CT: You were very forceful again in Romeo Is Bleeding.

LO: [Mona Demarkov] was one of those parts that I had to play because she was so outrageous and dangerous. And to work with Gary Oldman was a total treat.

CT: I think of you as an actor very connected to the flow of European history. In Enemies: A Love Story and The Reader, you played Jewish women who had escaped from the Nazis. These are two of your best performances, I think—you do great justice to those characters. Did you feel an extra burden of responsibility in playing victims of the Holocaust?

LO: Huge. It is a huge responsibility, but it’s also a gift. It makes you…I cannot even describe it. On Enemies: A Love Story, we came to New York, and there were a lot of survivors still working in restaurants, working in ordinary jobs. I got first-hand stories from people who had lived through hell and survived. [As an actor] you just have to go about it and enter the character. Nobody can say, “Oh, I get it! I get what suffering and pain these people went through.” Nobody gets it. All you can do is use every single cell of your body to try to tell the story.

LO: I think we need more. I don’t know if I’m naive, but I think I can hear the wheel turning a little bit. I’ve been lucky in my career that I’ve been able to play some powerful women. I think people want to see that. There’s an audience for interesting, complex, powerful female characters, and I think it’s a misconception that people only hunger for male heroes or male mobsters, or whatever it is. I think it’s slowly changing—so that’s exciting.