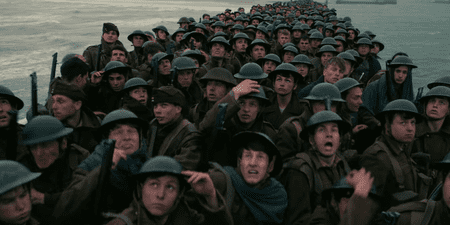 Christopher Nolan has directed an evocative if flawed epic about the evacuation of the battered British Expeditionary Force from the Dunkirk beaches in 1940. Here are some of the pros and cons.

Written by Nolan, Dunkirk expertly interweaves the stories of soldiers desperate to find a craft that will carry them to England; a privately-owned small boat bound for France on a rescue mission; and three Spitfires trying to protect the evacuees from Luftwaffe attacks.

Nolan was influenced by Lewis Milestone’s All Quiet on the Western Front (1930), which focuses on the experiences of patriotic German schoolboys fighting in the trenches in World War I. Dunkirk is similarly structured by the palpable absence of the enemy. The Luftwaffe pilots are unseen, and the German infantrymen who show up at the end are faceless. You almost want to send out a search party for the Wehrmacht.

While this absence allows Nolan to show that individual British men were capable of being heroic and selfish during the crisis, the film’s panorama of war is oddly lopsided. With one exception; the French soldiers trying to board the boats are given short shrift. 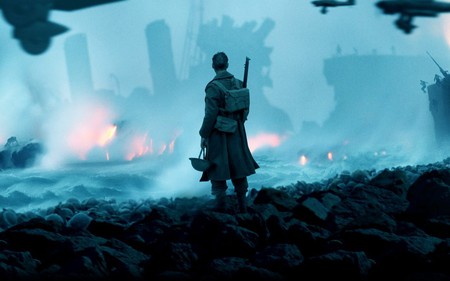 Destruction wrought by a faceless enemy in Dunkirk | © Warner Bros.

Dunkirk begins with a masterfully calibrated sequence, interrupted by only a few shouts, that shows the teenage English private Tommy (Fionn Whitehead) scurrying through the Dunkirk streets and dodging friendly fire from the sandbagged poilus. His arrival on the sands, where he sees British army units of different size and density waiting for deliverance, sets up a mood of intolerable foreboding.

Open to strafing from the sky, the beach is a deathtrap. Every man who wanted to survive had to stand there dreading the ominous buzz of German planes. There should have been women Auxiliary Territorial Service staff and female civilians amid the stranded army, but Nolan omitted them—a more perplexing absence than that of the enemy. 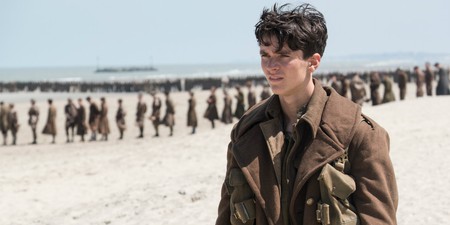 The chaos is too controlled

Joe Wright’s Atonement (2007) depicted mayhem on the Dunkirk beach, and the breakdown of military discipline, with a bravura five-and-a-half-minute, crane-aided Steadicam shot encompassing vignettes of shameful action. It is like Brueghel’s “The Triumph of Death” in Hitler’s time. The beach scenes in Dunkirk are relatively sedate—too controlled by far.

Eventually there are dramatic bombings; a sinking destroyer spills men into the sea. These events do not alter the feeling that time (and thus the film) is standing still. Not until Tommy, fellow private Alex (Harry Styles), the mysterious Gibson (Aneurin Barnard), and a group of Scottish soldiers make for a beached trawler is there a sense of progression in the evacuation scenes.

Triumph of the Moonstone

The journey to France of the Moonstone, the small boat owned by Mr. Dawson (Mark Rylance) and his 20-ish son Peter (Tom Glynn-Carney), gives a flavor of doughty Middle Englishmen heading into a maelstrom. En route, they pick up a shell-shocked shipwrecked soldier (Cillian Murphy), who demands they carry him home. In a struggle for the boat’s wheel, the soldier hurts its brave schoolboy crewman George (Barry Geoghan). A sacrifice looms, recalling the stirring Dunkirk episode in TV’s Foyle’s War. Alas, Nolan concludes this strand of Dunkirk with too much sentiment.

Unseen German riflemen use the hull of the beached trawler for target practice, causing beams of sunlight to penetrate the hold. It’s not enough light to illuminate the soldiers dozing and squabbling there as they wait for the tide. Alex suspects the silent Gibson (recently their saviour on a capsizing ship) is a German spy; Tommy tries to protect him. The bickering is intermittently incomprehensible, and it’s hard to tell which black-haired, pale-faced boy is which in the murk. 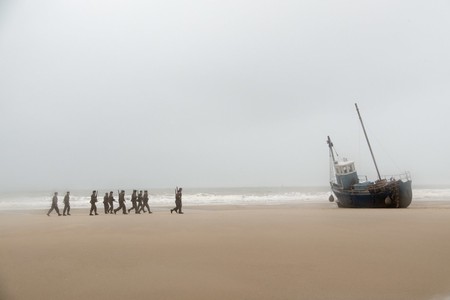 In Dunkirk, Tommy, Alex, Gibson, and the remnants of a Scottish regiment hope they can escape in an abandoned trawler | © Warner Bros.

The dogfights are thrilling

It’s admirable that Nolan avoided using CGI, but disconcerting that only three fighter pilots rally to the BEF’s cause. Still, we get an intimate sense of what it must have been like to stalk or be stalked by a Stuka or Messerschmitt in the vault of blue. The tenacious dogfights, superbly choreographed, genuinely evoke the formidable courage of “the Few,” even before Churchill named them such after the Battle of Britain. My father watched 1940s dogfights over the English Channel when he was 11. He would have approved of Dunkirk.

Dogfight over the sea in Dunkirk | © Warner Bros.

Cillian Murphy gives the film’s best performance as the shipwrecked soldier whose survivor guilt clouds his judgement. Mark Rylance is typically understated as the quietly resolute Mr. Dawson, a character as stoical as his Soviet agent Rudolf Abel in Steven Spielberg’s Bridge of Spies.

Kenneth Branagh is fully focused as Bolton, the British Navy commander—inspired by Captain (later Admiral) William Tennant—who oversees the evacuation and silently registers every setback and breakthough. It’s acceptable that the stiff-upper-lipped Bolton’s eyes moisten when fishing boats and small craft roll into Dunkirk. But Nolan gave Branagh a horribly self-congratulatory last line, and overall the character smacks too mightily of Keeping Calm and Carrying On. Colonel Winnant (James D’Arcy), Bolton’s opposite number in the Army, at least gets to fret out loud.

Jack Lowden is magnetic as the Scottish fighter pilot Collins. A boy doing a man’s dangerous job with minimal fuss, he’s barely fazed when his plane runs out of fuel and arrows into “the drink” at around 360 miles per hour.

Collins’ Steve McQueen-like flintiness contrasts him with the retired fighter pilot Freddie Page who, in Terence Davies’ The Deep Blue Sea, is played by Tom Hiddleston as a self-parodying spewer of RAF jargon. Freddie’s nostalgia for his lovely war indicates his maladjustment in peacetime. During the battles of Dunkirk and Britain, Freddie would no doubt have been as ice-cool as Collins. 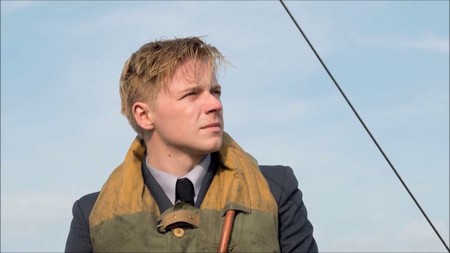 During a sortie across the Channel, Collins loses contact with Farrier (Tom Hardy), the older RAF pilot who had assumed control of their surviving two-Spitfire squadron after their leader was shot down. Farrier vanishes from the middle part of the movie. Toward the end, Peter Dawson mentions that his brother, a Lancaster Bomber pilot, had been lost early in the war, whereupon Farrier’s plane zooms back into action. It’s almost as if he is the ghost of Peter’s brother, or the spirit of all the dead British flyers.

Farrier is forced to land near Dunkirk and climbs out of his cockpit as anonymous German infantrymen surround him—a direct homage to the capturing of “the Cooler King” Hilts (McQueen) in The Great Escape (1963).

Most of his face has previously been hidden by his oxygen mask. When he removes it and looks defiantly into the camera, Hardy is revealed not only as Farrier but as Tom Hardy, English Movie Star. Hardy is a formidable actor, but this moment not only smacks of vainglory, it cancels the audience’s suspension of disbelief. 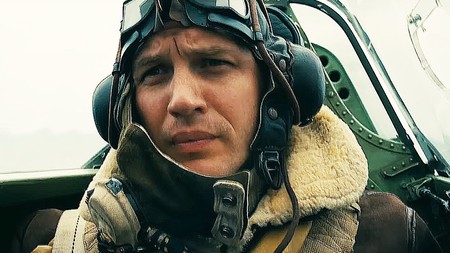 Despite its underpopulated canvas, Dunkirk is an object lesson in vivid, non-gratuitous pictorialism—as was Nolan’s The Dark Knight Batman trilogy. He works wonders with long-distant shots smeared with plumes of smoke, with images of clustered bedraggled and dejected Tommies, with frightening shots of men swimming into an oil slick just as it catches fire. And with a shot of a Dunkirk survivor who, ordered below by Mr. Dawson, calmly remarks he just wants to see the white cliffs of home.

The Trouble With Harry…

It would be cynical—wouldn’t it?—to suggest that Harry Styles, charismatic frontman of the boy band One Direction, was cast in Dunkirk to entice teenage girls to see a movie otherwise unlikely to attract them in droves. Fortunately, Styles can act. He acquits himself admirably as Alex, the grimy, hungry soldier whose frayed nerves cause him to turn on the mysterious Gibson.

Paranoia-induced irritability aside, Alex is an archetypal role: the faintly shifty East End Jack the Lad. Danny Dyer perfected the type in films like The Trench (1999), Borstal Boy (2000), and the Andrea Arnold short Wasp (2003). Every English war film needs a recalcitrant Cockney—see also James Booth in Zulu (1964). It’s a good job One Direction is on hiatus, innit? Maybe Styles will carve himself a niche, or even become the next Terence Stamp. 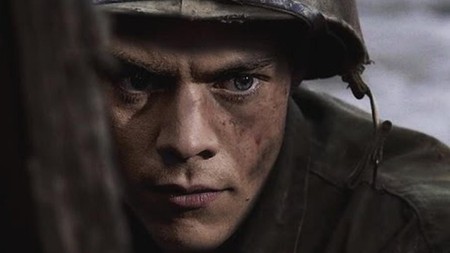