A Photographer’s Love Letter to the Pacific Northwest 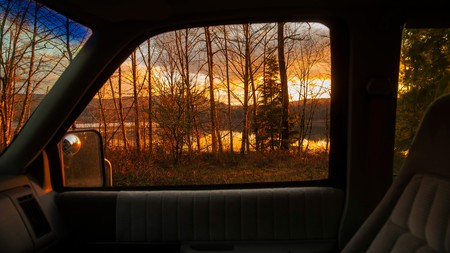 For photographer Levi Mandel, his home region of the Pacific Northwest offers respite from the relentless nature of New York, where he lives and works today. He takes Culture Trip on a journey to the areas of Washington and Oregon to show us just why – and how best to explore it.

“My time spent in the Pacific Northwest consisted of hours behind the wheel of a 30-year-old pickup truck. I was absent from modern luxuries such as air-conditioning, power steering and the radio, yet I had everything I could ever need. I felt as if this very vehicle was created specifically for me, decades prior, for the sole purpose of exploration.” 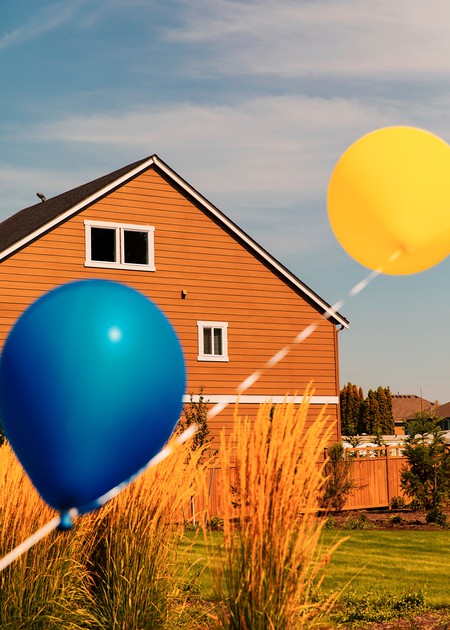 “I’m a city dweller to the core, but I’ve always found new-construction suburban communities surprisingly appealing. Row after row of identical homes should terrify me in theory, and yet I can’t help but tour these communities whenever time allows. After 12-odd years living below, next to and on top of my NYC neighbors – crammed in like sardines in mostly neglected yet disproportionately expensive housing – the idea of living in a proper house with a proper garage and a yard is in many ways what I’ve always longed for. The reality is that I’d last several weeks in a housing development before going stir-crazy and longing to move back to the city.” 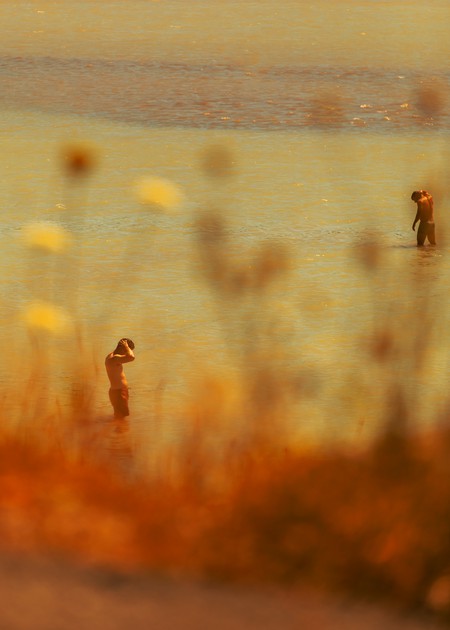 “While driving on an endless logging road somewhere within the Cascades, I pull over to stretch my legs and have a snack. Through the trees about 100ft [30m] below, I spot two young hikers washing their bodies in the August sun. The contrapposto of both men felt ancient, like Roman sculptures carved directly into the lake. The Washington wildflowers blow in the breeze as I photograph with a 200mm lens.” 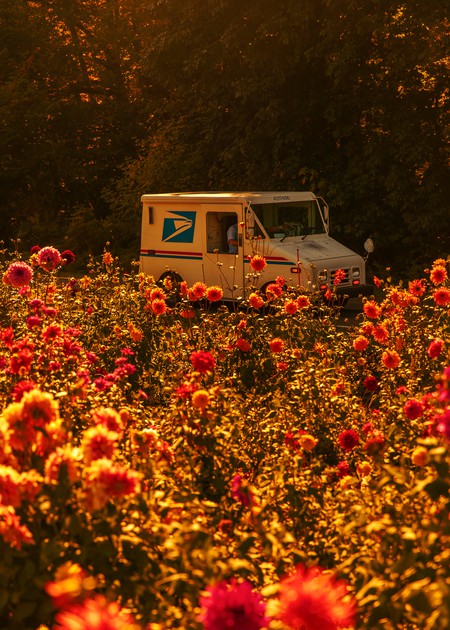 “Somewhere between Olympia and Portland, I spot the most remarkable off-season rose garden, in front of what I thought was an abandoned family farm. After passing the property twice, I park across and down the street and run into the flowers to photograph the insanity of a neglected yet perfect symphony of roses.” 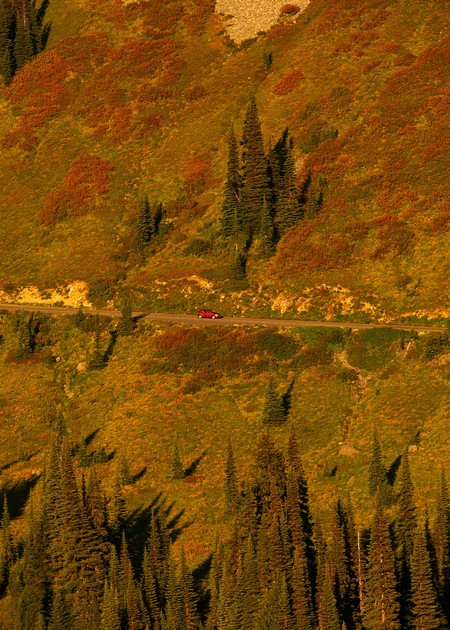 “If you only have time to visit one section of Mount Rainier National Park, I recommend you visit Paradise. True to its namesake, Paradise is one of the most breathtaking areas accessible by car on Mt Rainier, and it’s one of the most beautiful slices of wilderness I’ve ever witnessed. Deceivingly easy to access, the parking lot alone will draw your breath. Directly up the mountain is a panoramic view of Mt Rainier’s snow-capped peak, while directly behind sit endless rows of trees covering miles of winding roads. On an August morning in 2017, I was fortunate enough to witness the near-total solar eclipse from somewhere along this route. Another eclipse is expected in the same region on April 8, 2024.” 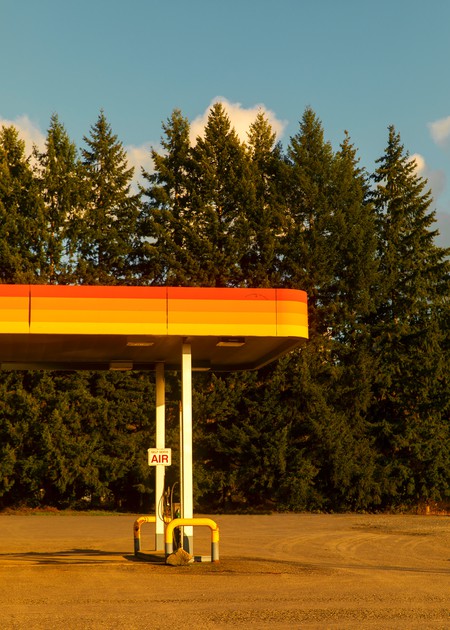 “Fans of the series Twin Peaks will appreciate the retro gas stations and truck stops along I-5 between Canada and Portland. I drove past this particular beauty three times before pulling off and photographing the awning. Not pictured are dozens of other incredible trucks – mostly from the 1980s and ’90s – standing stoic in shades of blue, oranges and browns.” 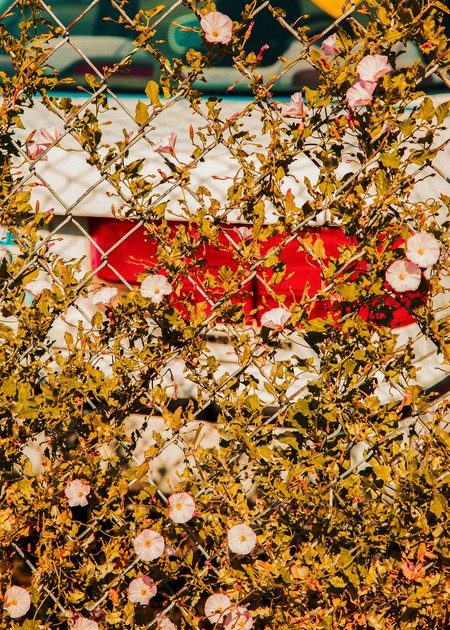 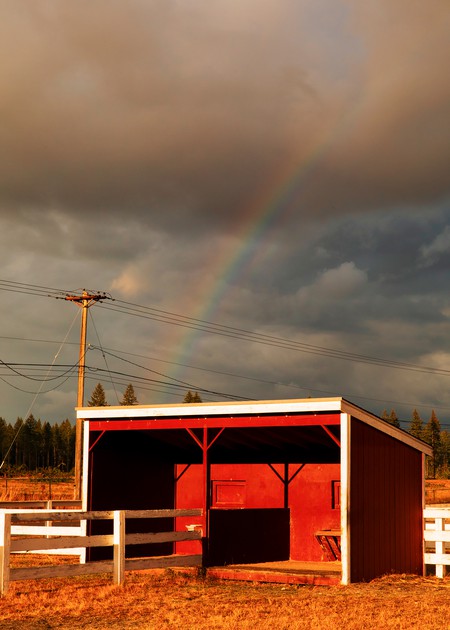 “On a sleepy Tuesday, I received a call from my aunt, asking whether I’d be interested in coming with her to her dog-herding class. That evening, we arrived at a farm somewhere outside Puyallup, where a young german shepherd chases a group of sheep before successfully guiding them back into their shack. The dogs are being trained for competition or actual farm work. At the end of the evening, the dog trainer herself released her chihuahua into the ring, which – although no more than 10in high – managed to return the sheep home in record time.” 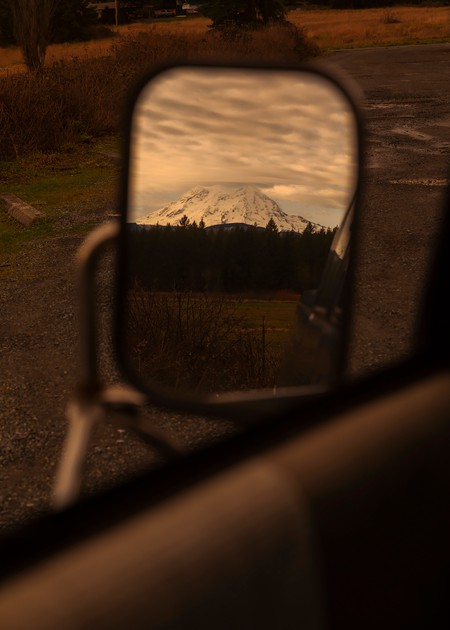 “It’s impossible to escape Mt Rainier while in Washington. She is omnipresent and impossible to ignore, towering 14,000ft [4,267m] over the Puget Sound. Often hidden by the Pacific Northwest overcast, it’s common to discuss whether the mountain is ‘out’ or not over small talk, as only on clear, sunny days can Mt Rainier be seen in its entirety.” 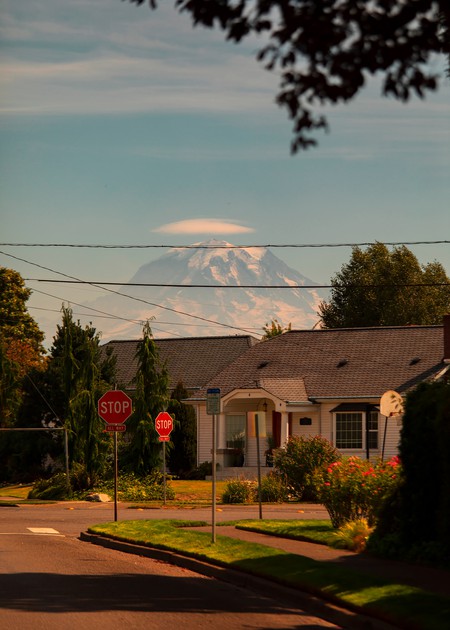 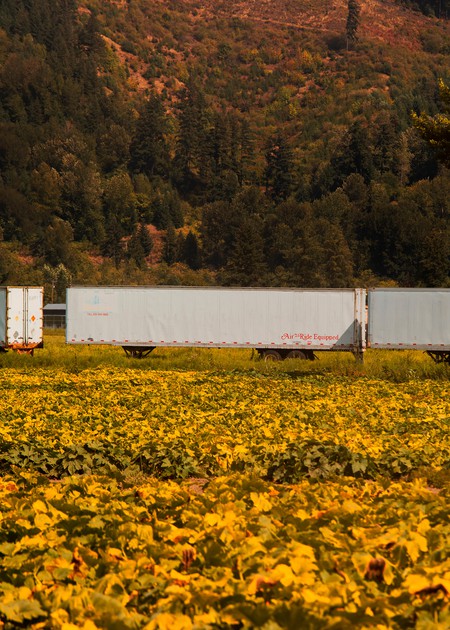 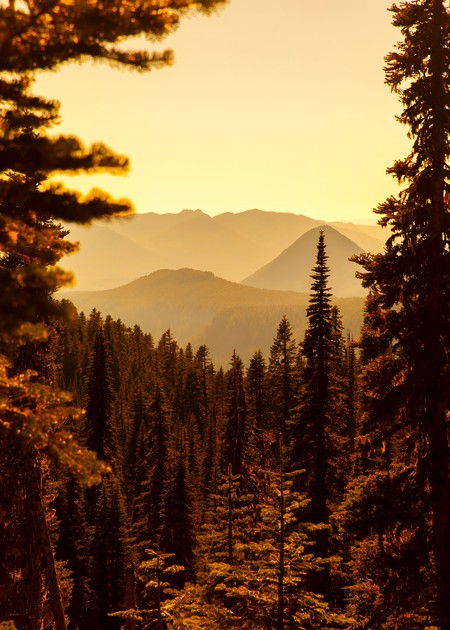 “My cousin and I typically make an effort to drive into the mountains at least once while I’m home, which is great because he’s able to take me to secret areas that are truly ‘locals-only.’ As an ex-Army medic, he is skilled in the art of survival and knows quite a bit about different off-roading trails accessible only by a 4WD vehicle. Creeping past 200ft [61m] cliffs on one particular drive, we stopped for this view and a bite to eat. The silence this far away from everything is deafening.” 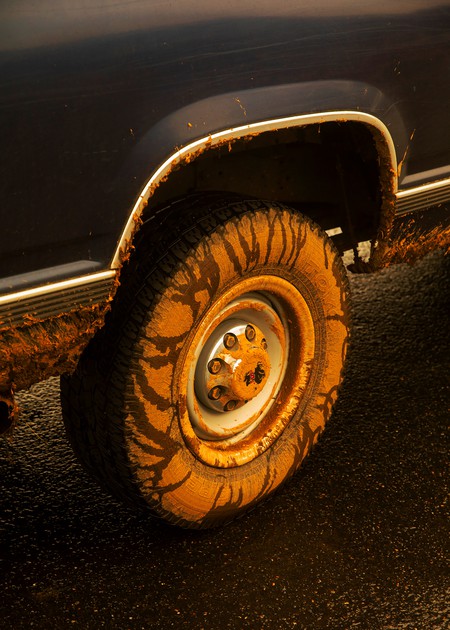 “One problem with exploring the backcountry directly after a fresh rain is that the earth turns to mud, and my vehicle was far from agile. Five minutes after stopping to stretch, my wheel gets stuck axel-deep in the earth, each rotation of the wheel digging me deeper and deeper into the ground. Fortunately, there were some old planks of wood in the bed that I used to spin my way free.” 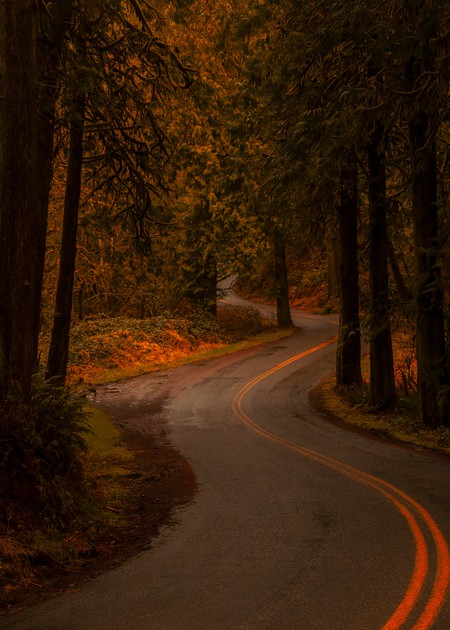 “In Oregon, just below the border with Washington, there is an impressive body of Native American land, which is protected and preserved from all things destructive – specifically clearcutting and development.” 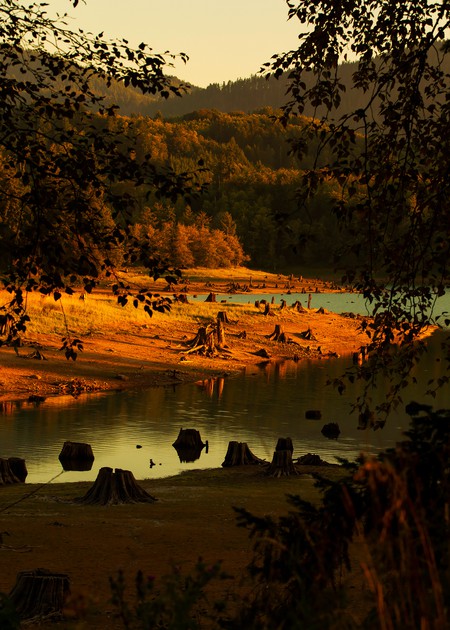 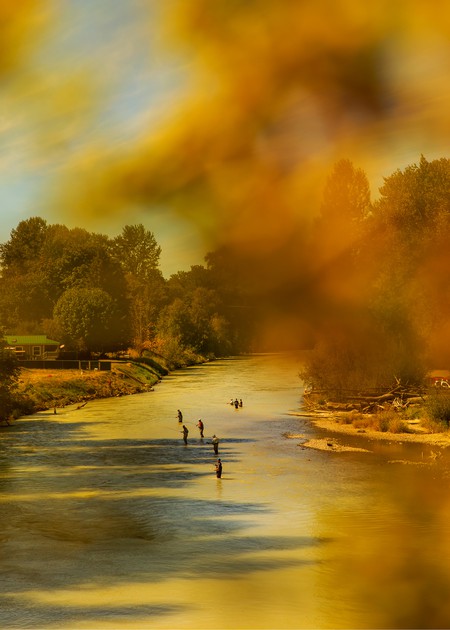 “A group of fishermen wades into a hidden stream on protected Native land, just north of Lakewood. The water is not visible from the street above – the only access being a short hike on an unmarked trail through the forest.” 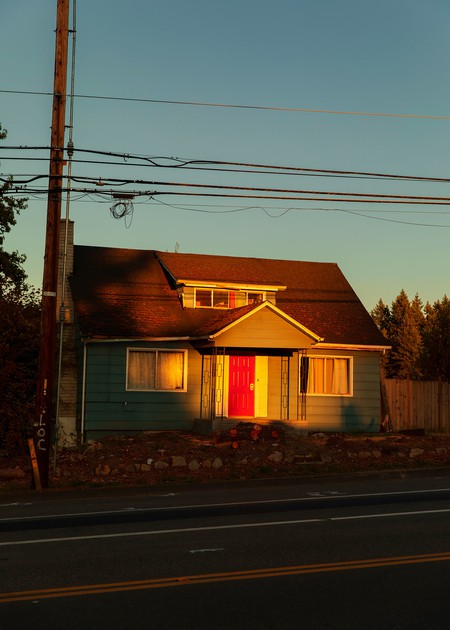 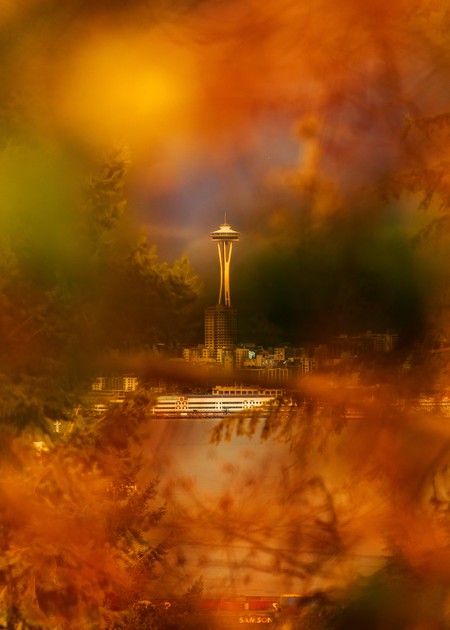 “My love for Seattle began at a young age when my parents would take my brother and me to visit the Fun Forest, an indoor play arena filled with rubberized trees inside the Seattle Center. When I turned 17, I moved to the city to study with the Pacific Northwest Ballet, with my first apartment on Lower Queen Anne, steps from where the Fun Forest once stood. Seattle has become a hub for the tech industry in recent years, most notably with Amazon moving its campus to the South Lake Union area. Like other great cities that have fallen to the hand of tech – most notably San Francisco – Seattle’s affordable housing market was destroyed by skyrocketing real estate, driving out anyone not capable of paying tech-salary rents.” 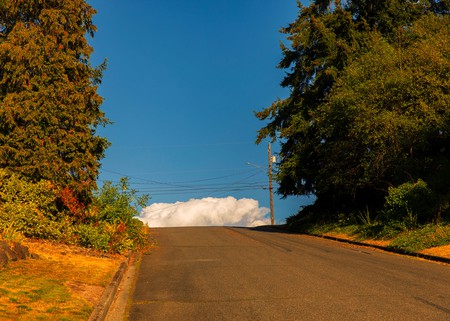 © Levi Mandel
Give us feedback