Dubai Neighbourhood Guide: Where To Stay in the City 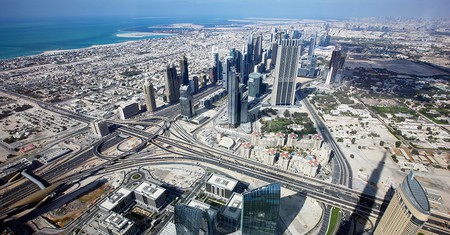 Dubai’s astronomical expansion over the past two decades has created a patchwork city of densely populated neighbourhoods with no real centre. For first-time visitors, it can be difficult to get to grips with the layout, which often seems to defy logic. This guide will help you suss out where to stay in the UAE’s sun-drenched second city.

Dubai grew outwards from Dubai Creek, a traditional port that is still a thriving export hub today. Today, the city layout is long and narrow: the old creek stretches down the coast and into affluent new neighbourhoods like Dubai Marina and Palm Jumeirah, and if you drive away from the beach for less than an hour, the teetering apartment blocks, manicured lawns and palm-lined boulevards will melt away into miles upon miles of rolling desert.

Backing onto Jumeirah Beach Residence, but with a slightly more laid-back atmosphere, Dubai Marina is clustered around an artificial inlet. It’s a great place to find holiday rentals with water views, plus it’s home to some of the city’s most impressive bars and restaurants. For a Michelin star-worthy Turkish meal, book a table at Ruya before heading to buzzing Siddharta Lounge by Buddha-Bar, where you can sip cocktails on a terrace surrounded by skyscrapers. Pier 7 also has glittering views of the Marina, which you can take in from the terrace of a British gastropub, an American smokehouse or a rainforest-inspired restaurant and cocktail bar. The yacht trips that leave from the jetties behind Dubai Marina Mall are popular at weekends, and it’s worth waking up early to wakeboard or wakesurf your way along the shore with Xtreme Wake. 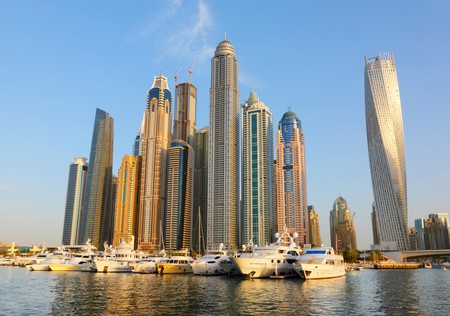 Lining a coveted stretch of Dubai’s coastline, Jumeirah Beach Residence is a combination of dizzyingly tall apartment blocks, luxury hotels and a huge waterfront development – aptly named The Beach – that opens out onto the sand. Ideal for anyone who wants to stay within minutes of the sea, the area is compact enough to wander through on foot, browsing boutiques or cooling off with gelato around one of the pretty, contemporary plazas. Be warned: the area is plagued by traffic problems, but there is plenty to do within walking distance. Activities include Skydive Dubai; the much-Instagrammed beach club Zero Gravity; and Bluewaters, with its unmissable observation wheel (the world’s tallest) and sprawling Las Vegas import, Caesars Palace hotel. 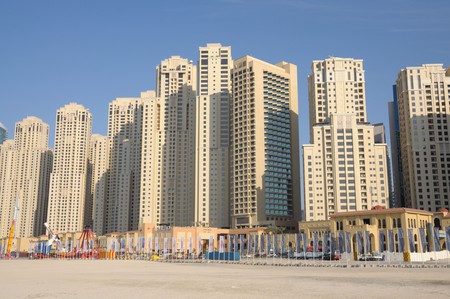 Exclusive housing developments line the fronds of Palm Jumeirah, but Atlantis The Palm – famous for its aquarium, water parks and celebrity chef-fronted restaurants – is the island’s biggest draw. If you’d rather bed down away from the hubbub of tour bus crowds, however, there are plenty of other options. You’ll likely recognise FIVE Palm Jumeirah from the Instagram feeds of influencers, while at Anantara The Palm Dubai you can wade straight into huge lagoon pools at private villas. If you’re on a budget, Palm Jumeirah’s most reasonably priced rooms come with balconies and sea views, too. It can be quite a schlep to get to the outer reaches of the island, but there’s plenty to keep you occupied without setting foot on the mainland, whether you want to dance on the sand at Nasimi Beach club, enjoy a lazy waterfront lunch at Club Vista Mare or shoot down water slides at Aquaventure. 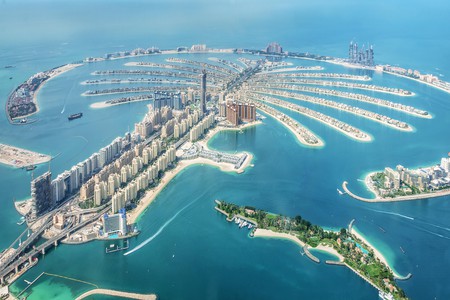 What Al Barsha lacks in showstopping hotels it makes up for in affordability. Budget hotel chains like Centro and Novotel can be found here, plus the neighbourhood’s proximity to the city’s main highway means you’re never more than an easy taxi ride from anywhere in new Dubai. It also has great metro links, and single journeys within the same zone cost as little as 2 United Arab Emirates dirhams (£0.44). Al Barsha isn’t the prettiest of Dubai’s neighbourhoods, but it’s home to offbeat attractions like the History of Cinema Museum and, if the heat gets too much, you can retreat to the real snow slopes of Ski Dubai. Al Barsha also offers an antidote to Dubai’s slick nightlife: it has kitsch karaoke joints, bars with raucous resident rock bands and sticky-floored Cuban bars. 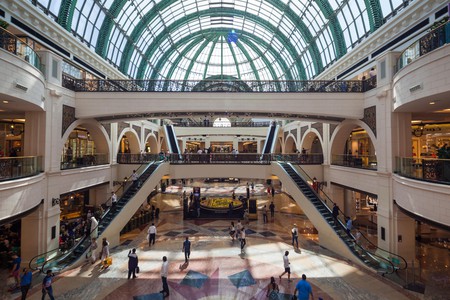 These quiet residential neighbourhoods stretch right along the coast of Dubai. A mishmash of picturesque seaside bungalows, mid-century villas and ornate mansions, Jumeirah and Umm Suqeim are dotted with mosques, corner shops packed with eclectic treasures and high-end boutiques. These neighbourhoods are full of glitzy resorts, a water park and a self-proclaimed six-star hotel, but other parts have a distinctly laid-back vibe. Spacious strips of sand host food spots: Bu Qtair (as recommended by the late celebrity chef Anthony Bourdain) serves plates piled with fried fish and prawns, Single Fin whips up perfect cappuccinos inside a surf shop and Comptoir 102 is all about raw vegan açai bowls and chia puddings.

This six-lane highway speeds through the whole city, from the outer reaches of Jebel Ali all the way to old Dubai. Its centre – where skyscrapers are clustered together to form the iconic skyline – is the perfect midway point between old and new Dubai, and its many metro stops put you within reach of Downtown Dubai, Dubai Marina, the souks around Dubai Creek and the airport. There’s no shortage of nightspots in the area, either: everything from rooftop bars with views over the city to dazzling clubs, romantic wine bars and down-to-earth dive bars. For a special occasion, head over to nearby Dubai International Finance Centre, where you’ll find some of the city’s chicest restaurants including Zuma and La Petite Maison (just make sure you pack fancy threads with very deep pockets). 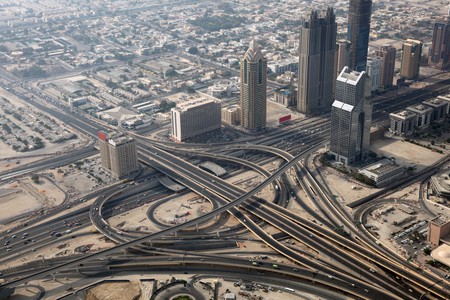 Instantly recognisable for the sky-brushing Burj Khalifa, in record-breaking Downtown Dubai the world’s largest mall and tallest building sit side by side, surrounded by sweeping promenades fringed with fairy lights and musical fountain shows. It’s an extravagant area, to say the least: real estate is at a premium; the mall is jam-packed with high-end shops and the hotels are the height of luxury. Fashionable though it may be, there are tastefully understated boutique hotels, lively South African sports bars and some real restaurant gems to be found in among the pricey tourist traps. For slightly more affordable accommodation – without forfeiting the Burj Khalifa views – try nearby Business Bay, just a short taxi ride from Downtown. 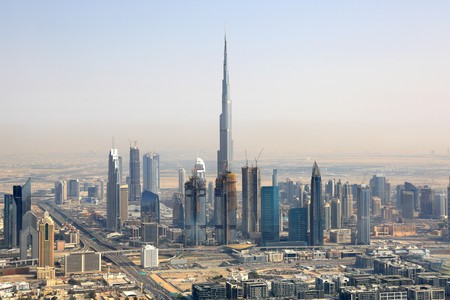 If mall mooching and sunbathing aren’t your top priorities, consider staying in Bur Dubai. Buzzing and hectic, it has its own kind of charm and feels a world away from the pristine streets and manicured hedges of the city’s newer neighbourhoods. More generally, Bur Dubai refers to a few different neighbourhoods on the southern side of Dubai Creek, including Meena Bazaar (where you can wander through flower-draped alleyways by the Hindu temple) and Al Fahidi (a maze of traditional windtowers, art galleries and idyllic courtyard cafés), both of which are worth your time. The area is also a gold mine of South Asian restaurants, which turn out fiery goat curries, paper-thin dosas (rice batter creations akin to pancakes) and moreish chaat (a savoury potato snack) for next to nothing. 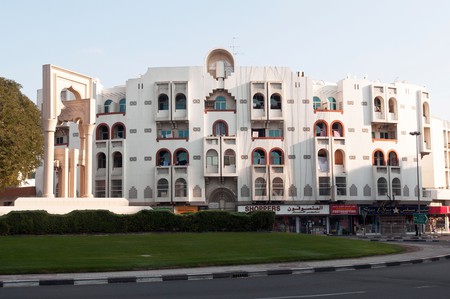 Where it all began, Dubai Creek has its own distinct character that’s difficult not to fall in love with. It’s a working harbour, with all the hubbub that goes along with it, and harks back to Dubai’s humble beginnings as a fishing village. Rickety abras (wooden boats) ferry people from one side of the water to the other, and cacophonous souks line the banks where you can pick up anything and everything: a 24-karat gold necklace, a bag load of saffron, camel milk gelato, boxes of super sweet halwa. The range of accommodation here is excellent, too, running the gamut from cheap and cheerful chains to luxury resorts with landscaped gardens. 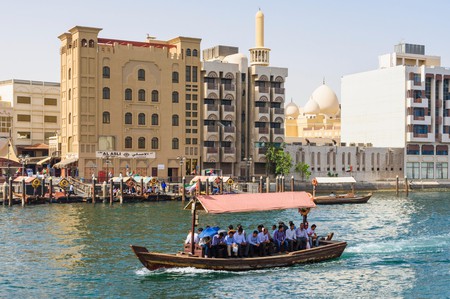