The Most Audacious Building Projects in Dubai 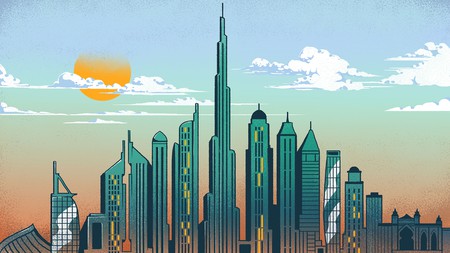 The glittering city of Dubai has established itself as a new outpost for experimental architecture, attracting the globe’s top design talent in the process. Here are Dubai’s most outlandish projects.

Dubai may not possess the priceless historical architecture of some cities, but what it does have is a daredevil attitude, pots of money and an unabashed desire to create statement architecture. The Emirati city has sprouted some of the tallest and most radical buildings on the planet since becoming a global hub for commerce, with the population increasing from a mere 183,187 in the 1970s when it was a small fishing port to more than 3 million today.

Dubai has become a playground for starchitects and developers alike, many seeing it as a rare opportunity to bring seemingly unimaginable projects to fruition – from underwater hotels and palm-shaped landmasses to revolving towers and giant Ferris wheels. While the focus is often on Dubai’s soaring towers, Culture Trip puts size aside and looks at the most outlandish designs in the city.

Dubai has a reputation for creating the biggest and most extravagant buildings in the world – the tallest building, the largest mall, the most luxurious hotel and so on – but no other project encapsulates the city’s unrelenting quest for absurd grandeur like the Palm Islands. The trio of gargantuan, artificial islands, one of which is shaped like a palm tree, dominates The Gulf coastline and can be seen from space. The Palm Jumeirah, the only one completed so far, stretches an astounding 515 kilometres (320 miles) and is one of the biggest artificial islands in the world.

It’s undeniably a monumental feat of engineering, taking billions of cubic feet of ocean sand to create, which was dredged from the Gulf and then sprayed into place. The Palm Jumeirah is now home to thousands of homes and apartments, as well as luxury resorts including the Disney-esque Atlantis The Palm and the Ottoman Empire-inspired Jumeirah Zabeel Saray. Construction on the other two, Palm Jebel Ali and Deira Island, began over a decade ago but is now on hold.

Dubai’s giant Ferris wheel will put the London Eye to shame, standing at a vertigo-inducing height of 210 metres (689 feet) – almost double the size of the British landmark and taller than most skyscrapers. Located on the new Bluewaters Island, the Ain Dubai or ‘Dubai Eye’ is set to carry up to 1,400 passengers at once, providing unparalleled views of the city’s contemporary landmarks, including the Burj Khalifa, Palm Jumeirah and Burj Al Arab. It’s made up of more steel than the Eiffel Tower, and thrill-seeking visitors will also have the opportunity to climb one of the legs of the gargantuan structure, fitted with the highest rope-climbing platform in the world. It is due to open imminently, but the official opening date remains under wraps.

Forget the Chelsea Flower Show – this huge floral fantasyland is out of this world. Some 150 million blooms make up this unashamedly kitsch technicolour theme park, with immense floral sculptures ranging from a life-size replica of an Emirates A380 to a supersize Mickey Mouse – both of which are Guinness World Record-breaking displays. The garden closes its doors in summer as the heat kicks in but reopens every November for a new season. If you’re looking for the ultimate Instagram backdrop, this is it. 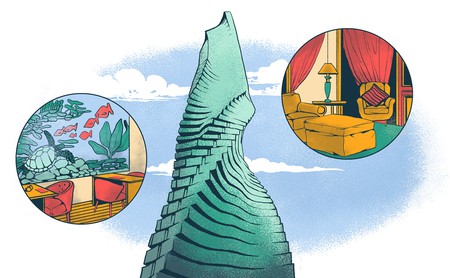 Dubai already has its twisted Cayan Tower, but the proposed Dynamic Tower takes the concept to another level. This self-powered, shapeshifting hotel and apartment building will apparently allow guests to rotate their rooms 360 degrees so they can watch the sunrise and sunset – and it’s all activated by voice control. The 80-storey building will also feature wind turbines on every floor and solar panels on the roof, generating enough energy to fuel the building’s electricity. The concept was designed by Israeli-Italian architect David Fisher of Dynamic Architecture, which has announced the building will be completed by 2020, although construction hasn’t begun yet.