Top 10 Unusual Things to Do in Oman 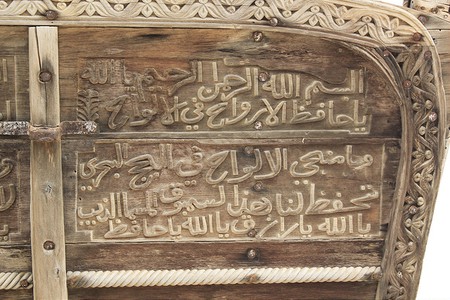 Author Mehmet Murat Ildan once said “Unusual doors often take you to the unusual worlds!” Taking a dip in the world’s most beautiful sinkhole, touring a cave inhabited with blind fish, and spending the night in a an ancient Omani village are just some of the atypical things to do in the Sultanate. Grab the world of uncertainty by the reigns and indulge in our top picks of unusual things to do in Oman.

Majlis Al Jinn literally translates into “the gathering place of spirits” and there are some eerie tales that surround the cave. Legend has it that there was a woman named Salma from a nearby village who angered a one-eyed genie who shot out bolts of thunder, one of which created the cave chamber. The entry way was discovered in 1983 by an American hydrogeologist and his wife and today is a popular tourist attraction. Famed skydiver and daredevil Felix Baumgartner jumped the cave in 2007 and up until recently there was no way to access the cave except by foot or renting donkeys from a nearby village; now visitors can get to it with an off-roading vehicle. It is the second largest cave chamber in the world, and while getting there takes physical effort and one can only descend with ropes, we do not recommend jumping in!

Estimated to be two million years old and recently open to visitors, Al Hootah Cave is one of its kind in the whole region. The cave has a rich ecosystem that includes four lakes. A discovery in 1980 found that a rare species of blindfish lived in the central lake of the cave. They adapted to the dark environment by losing their pigment, scales, and even their eyes. There are also sightings of bats, spiders, snails, water beetles arthropods, and mollusks. Visitors can journey into the cave via a boat with a controlled lighting system as to not disrupt wildlife dwelling in the dark. It is a spectacular geological site, and even though photography is prohibited inside the cave, it is a memorable experience for the whole family. Adventurous visitors are allowed to dip their feet in the water and make contact with blindfish. There is also a restaurant, gift shop, and geological exhibition onsite, but be advised: it is better to book tickets in advance. 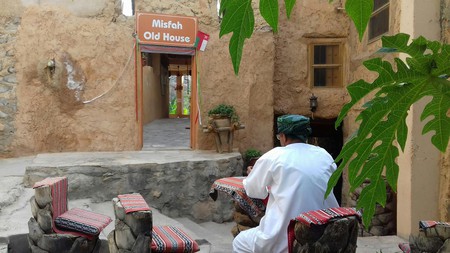 Spend a Night in an Ancient Mountain Village

Going to a shopping mall is pretty standard, however, stopping over at a mountain village and spending the night surrounded by fascinating agricultural terraces and old stone houses is not so usual. Misfat Al Abriyeen is a cutesy mountain village that boasts houses built years ago from rock and stone; the whole development of the village is fascinating and did not require a team of engineers or architects. The village is becoming a hot tourist destination and has a platform from which people can see the dramatic view of the village. There is also a map available for the historical part of the town, where the old houses were made out of mud and built on solid rock foundations, making them unique and unusual compared to other towns. Get the whole mountain village experience by staying in town at Misfah Old House. Even Prince Charles has visited the premises! 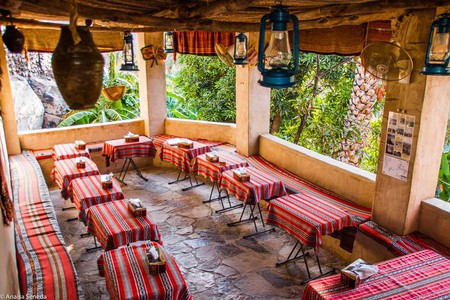 The stories that surround this town are all about ghosts, spirits, genies, witches, and warlocks; it is actually listed as one of the worlds most haunted cities by the National Geographic. It is a state that oozes history and culture and many people from around the region believe Bahla is filled with magic and witchcraft. Unfortunately for them, no one was seen flying recently. In Bahla, there is a famous wall called Bahla Gate, which still stands today. Legend has it that it was built in one night to protect the city from an enemy attack by genies. The Bahla fort is also said to be an architectural masterpiece, and the UNESCO world heritage site is open for visitors. 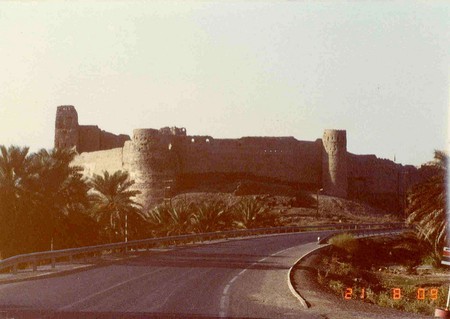 Van Gogh once said, “For my part I know nothing with any certainty, but the sight of the stars makes me dream.” So get ready to dream on, because Oman is notorious for having some of the most epic stargazing spots. Starting with Jabal Al Akhdar 2000 meters above sea level, the night sky is clearly visible with no obstructions from buildings, and most hotels there have telescopes visitors can use, or you can do your own stargazing by camping out. Our resort recommendations for Jabal Al Akhdar are Alila Resort and the Anantara, both of which have telescopes, great atmosphere, luxurious rooms, and delicious food options. Another great spot for stargazing is the town of Bidiya, specifically in the Ash Sharqiyah region. The golden desert there is a great spot to camp and stargaze, as it far away from the busy cities and has low humidity, the key to a clear sky. Apparently one can spot the Milky Way here, and if you have your own telescope, the planet Mars. 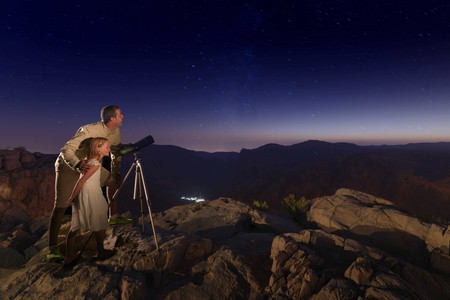 The Rose Water Distillery in the Mountains

Home to two luxurious resorts, including the Alila Resort, which was on the US Conde Nast Gold Travel list in 2016, Jabal Al Akhdar is one of Oman’s highest mountain ranges, 2000 meters above sea level. Jabal Al Akhdar is a beautiful lush mountain village covered with damask roses, pomegranate, and juniper berry trees. The weather is always pleasant and at night the sky looks like a twinkling wonder; most resorts there have their own telescopes for guests to use, but you can also do your own stargazing by camping. There is also a rose water distillery to check out that maintains the traditional method of extraction.

Take a Dip in the Bimmah Sinkhole

Some Omani’s believe this sinkhole was formed when a shooting star fell to Earth and created something beautiful. The Bimmah sinkhole is considered one of the most visually appealing sinkholes in the world. It has quick become a tourist attraction due to its beautifully formed shape, the perfect erosion of rocks, the dramatic cliffs and the clear turquoise waters that are too irresistible to resist. There is a staircase available for people to go down to the sinkhole and swim. Bimmah sinkhole is only 600 meters away from the sea and is located between the coastal towns of Dibab and Bimmah, east of Muscat. 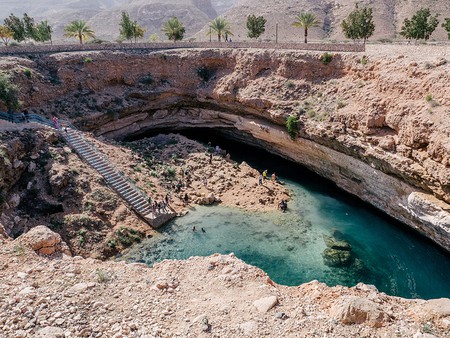 There are tombs and towers in Oman that ooze an air of mystery and are said to be older than the Egyptian pyramids. There are towers and tombs scattered all over the country, most of which are of unknown significance. The Bat Tombs are located in Bat, Al Ayn, and Al Khutum in the A’Dahirah region of Ibri. The tombs date back to the 3rd century B.C. and by 1988 they were included in the UNESCO World Heritage List. Another UNESCO world cultural site we recommend checking out is the tomb of Bibi Maryam A.K.A. The Mausoleum of Lady Maryam, found in the ancient city of Qalhat. Some say the King of Hormuz, Bahuddin Ayez, built the tomb in the 13th century for his wife. It is hard to believe that this is all that is left of this once prominent, thriving city.

Be Awed By the Great Dam of Oman

The biggest dam in Oman is considered a man-made wonder. Due to its majestic structure and the dramatic view it boasts of the wadi, it is an unforgettable site, considering there is nothing like it in the region. There are cafés, parks, and swimming spots around the dam to rest at. It is approximately one hour and 30 minutes away from Muscat in Quriyat, and if you do not have a fear of heights, you can peer down the 75 meters below.

Venture Into the Land of Frankincense

The Land of Frankincense museum is located on a UNESCO heritage site, Al Baleed. What makes Al Baleed unique is the fact that it is located in Salalah, which is known as the land of frankincense, and although the trees grow in some parts of North Africa, Oman is known to have the best kind. Frankincense has long been valued and used in historic religious ceremonies. Some believe that burning frankincense dispels bad spirits or negative energy. UNESCO chose this site because it is considered by archaeologists to be one of the most prominent remains of an ancient Islamic city. Checking out the museum, you will gain more perspective on the history of Al Baleed, Salalah, and the frankincense trade. Salalah is about 1000 kilometers from Muscat, and is a gorgeous governate with a monsoon climate, is green all year around, and is surrounded by raging oceans, and coconut and banana plantations. 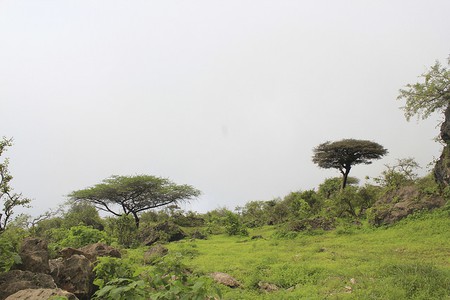