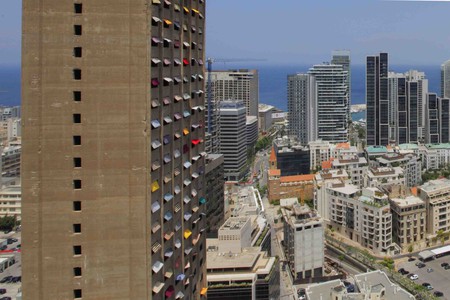 Burj El Murr, the unfinished skyscraper that has loomed over Beirut for the past 40 years as an emblem of conflict, has been given a new lease of life by Lebanese artist Jad El Khoury.

Over the centuries, built environments around the world have not only been caught in the crossfire of war but have come to represent these periods of hostility and those killed, ultimately transforming areas into historical landmarks. Many buildings in Beirut have taken on such symbolism.

In 1974 work started on building the Burj El Murr (also known as Murr Tower or Beirut Trader Center), a 34-storey office tower in Beirut’s Kantari district. But when the Lebanese Civil War broke out in 1975, construction halted and the tower has stood unfinished and incomplete for over four decades. 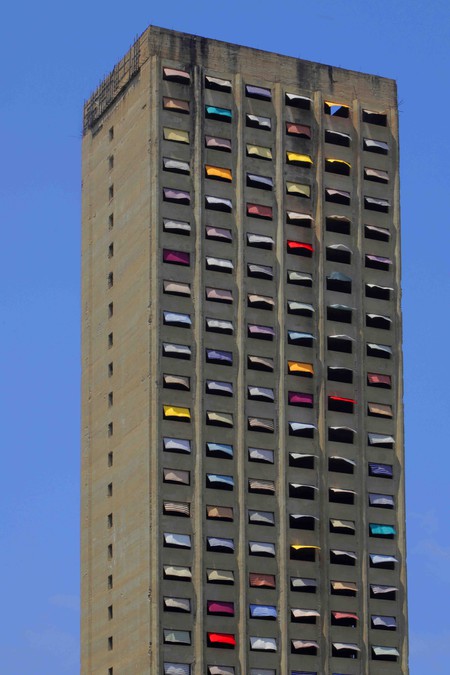 Due to its advantageous location near the division between the east and west of the city and its panoptical perspective, it became the ideal sniper hideout for various militia factions, enabling them to maintain control of large areas of the city.

Since the end of the war, the concrete shell of a building – owned by the prominent political El Murr family – has remained empty and incomplete. Too tall and too dense to demolish because of its close proximity to other edifices, it punctuates the Beirut skyline as a stark reminder of war and unreconciled history. 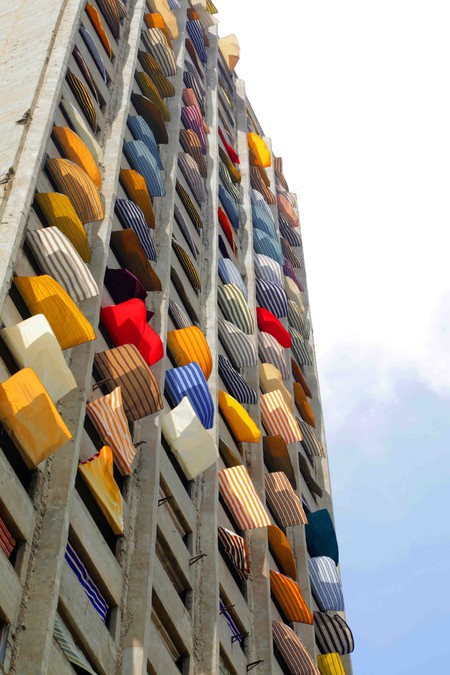 Lebanese artist Jad El Khoury has long been creating interventions in Beirut’s urban landscape to draw attention to these symbolic sites of warfare. In 2015 he scaled the abandoned Holiday Inn – another building that’s become an unofficial memorial to the civil war – to paint his distinctive doodled characters on the shell-scarred facade.

Khoury has now taken on the imposing Murr Tower for a two-month installation: ‘The Burj El Murr soars from Beirut’s skyline, filled with scars, constantly provoking the city’s residents, whose past is shadowed by war, and present is spent dealing with those harsh memories.’

‘I always saw this tower as a monster in the city, spreading negativity and bad memories with its infinite black windows,’ said Khoury. ‘This had to be changed. Burj El Hawa is a temporary installation that will give this dull building life through the vibration of colours.’

Khoury transforms the sombre monument that has overshadowed the city for far too long by using brightly coloured stripped curtains that typically adorn Beirut homes, ultimately ridding the tower of its involuntary symbolism of war.

Roughly translated as ‘Tower of Air’, Burj El Hawa animates the building by breathing new life and energy into it, and provides Beirut’s skyline with a symbol of hope that we anticipate the city and local community will embrace.

Burj El Hawa will remain in situ until July 2018.

Want to see more art around the world? The Rain Room finds a new home in the UAE.