This Centuries-Old Tradition in Iran May Soon Die Out 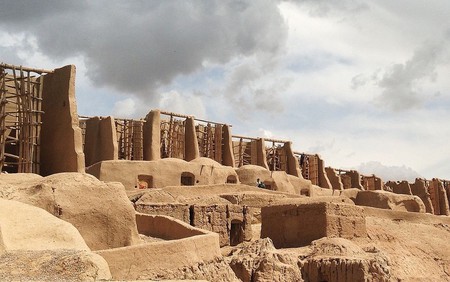 The gentle and steady rhythm of the click-clacks are the vital signs of this ancient relic, which tames the wind of the Iranian desert. The villagers of Nashtifan have been using windmills for over one thousand years, but they now face a grave threat. Read on to discover more about this centuries-old tradition in Iran that may die out soon.

In a village in northeastern Iran lies a living piece of history. The windmills of Nashtifan in the Khorasan Razavi province have been operating in the same manner as they were one thousand years ago. This region of the country receives strong winds, and as a result, windmills have been in use throughout the area for centuries. Indeed, this village derives its name from the Persian words nish toofan, which means “wind’s sting.” Sitting strategically at the top of the hill, these ancient feats of engineering not only overlook and protect the village from the stinging winds but also harness it, particularly between the months of September and December when the wind gusts are the strongest.

Stemming from the first windmills by the ancient Persians around the 5th century AD, historians credit these centuries-old windmills with spreading to and influencing similar structures in the west. They are designed on a vertical axis reaching up to a height of approximately 65 feet (19.8 meters) and have been constructed entirely from natural elements such as clay, straw, and wood. Each one comprises eight rotating chambers with six vertical blades. As the wind enters, it forces the chambers to revolve, thereby turning the axis and its grindstones which then rotate to mill the reserve of wheat into flour. Although they are neither modern nor efficient as a source of electricity, they can grind more than enough grain in the three to four months in the fall when they are most active.

Despite being listed as a national heritage site by Iran in 2002, these nearly 30 windmills may soon cease to exist. In the past, each windmill was taken care of by a family, but today, Mohammad Etebari, a village elder who has dedicated his life to preserving this cultural heritage, is the last person from the older generations to do so. Unsure of how much time he has left himself and with no apprentice or signs of interest from the village’s youth to look after this legacy once he is gone, this ancient tradition may come to a tragic end without the dedication and regular attention that its sole remaining caretaker gives it.