The 10 Best Cafés In Shiraz, Iran

Shiraz is one of Iran’s most cosmopolitan and historic cities, and is the famed birthplace of many Iranian cultural heroes, such as the poets Hafez and Sa’di. As a result, Shirazis tend to have a strong sense of pride in their cultural heritage, as well as a worldly, welcoming outlook. Here we review 10 of the best examples of their long-established cafe-culture. 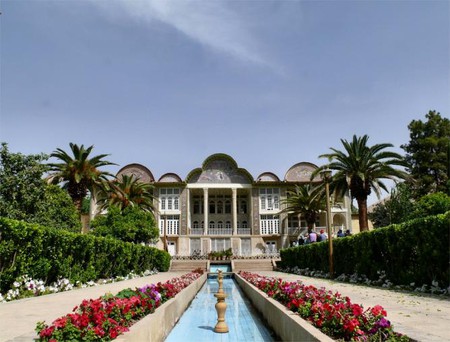 Concealed in the depths of the Bazaar-e Vakil, Saray-e Mehr is a delightful, multi-storey teahouse that offers the perfect respite from the heat and commotion of the streets below. Tastefully decorated with traditional Iranian ornaments, rugs, and wall paintings, you can relax with tea and a shisha pipe, known in Persian as qalyan. A basic food menu is also offered. Look out for signs down in the bazaar, as the entrance is (perhaps deliberately) hard to find.
Address: Seray-e Moshir, Bazaar-e Vakil, Shiraz, Iran

Popular with young, middle-class Iranians, the massive Haft Khan complex boasts four floors and numerous food haunts. Not far from Quran Gate, the historic entrance to the city, Haft Khan is a distinctly Iranian concept building, themed on the Seven Labours (haft khan) of Rostam, a Persian folk hero. There are two cafes here where you can treat yourself Western-style coffees and cakes, but the top floor teahouse offers some great views of the city that you won’t find elsewhere.
Address: 17 Ayatollah Rabbani Blvd, Shiraz, Iran, +98 71 1227 0000

Restaurant, Middle Eastern
Facebook
Email
Twitter
Pinterest
Copy link
Share
Map View
The Niayesh Boutique Hotel has a charming interior courtyard area that functions as a space to eat, drink, or smoke. Sit at tables or recline on takhts (raised carpeted platforms), all under the shade of the trees and to the sound of the central fountain’s gentle ebb and flow. Ice-cream, herbal teas, and soft drinks are also available.
Open In Google Maps
No4 Dastgheib Boulevard, Shiraz, Iran
+989028760541
Visit Website
Give us feedback

The much revered 13th century poet Sa’di is one of Shiraz’s most famous sons, and his tomb is definitely worth a visit. Whilst there you can refresh yourself in the cool, underground teahouse situated in its gardens amongst the cedar trees. The vaulted, brick ceilings and central pond of goldfish provide visitors to his shrine a moment of respite and reflection. They have a great selection of ice creams too.
Address: Aramgah-e Sa’di, Boostan Blvd, Shiraz, Iran 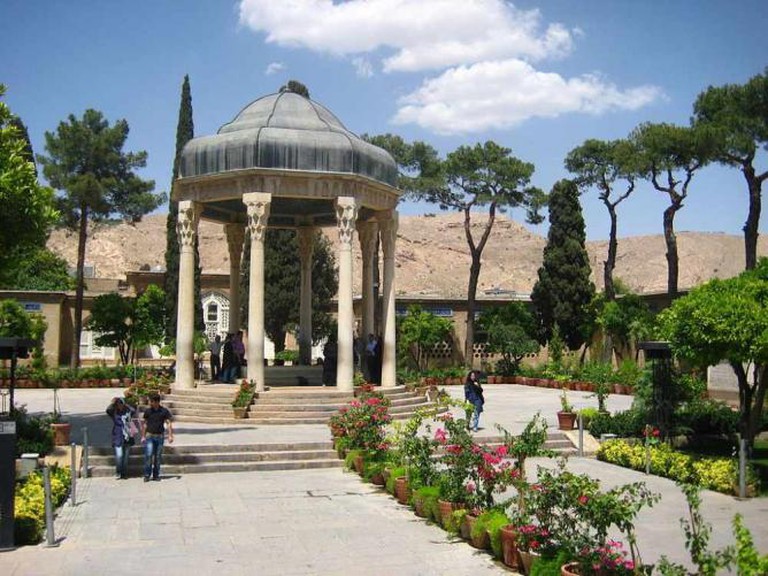 Tomb of Hafez | © Taranis-iuppiter/WikiCommons
Poetry is a significant part of the fabric of daily in life in Iran, nowhere more so than Shiraz. Hafez is perhaps the most widely loved of all Persian poets, and his tomb attracts visitors and pilgrims from far and wide. After exploring what must be the best-kept garden in the country, you can grab a glass of Persian tea in the coffee shop located in the walled-area towards the back of the grounds. It might be a good opportunity to invite some Iranians to assist you in using Hafez’s poetry to help predict your future (a custom known as faal-e Hafez).
Open In Google Maps
District 3 Shiraz, Fars Province, Iran
+987132284552
Give us feedback

Cafe, Restaurant, Irish
Facebook
Email
Twitter
Pinterest
Copy link
Share
Map View
Near the Bazaar-e Vakil, Atigh Traditional Teahouse is another multi-storey delight with a unique but charming aesthetic. The walls are covered in rugs, tassels, lanterns, pictures of notable national figures, and other miscellaneous ornamentation (including swords and abacuses). So whilst sipping on your tea or smoking your shisha, you can’t help become acquainted with this idiosyncratic visual depiction of Iran’s history.
Open In Google Maps
Zand Underpass, Shiraz, Iran
Give us feedback

Cafe, Middle Eastern
Facebook
Email
Twitter
Pinterest
Copy link
Share
Map View
Just one street down from the Bazaar-e Vakil, Café Termeh is a more modern-style establishment, offering a good selection of coffees, teas, cakes, milkshakes, and ice creams. With inside and outside seating, it is hospitable all year round. Like many modern style cafés in Iran, Café Termeh attracts young, educated Iranians, and pays homage to 20th century Iranian thinkers with their black and white portraits adorning the walls. The garden backs onto the tomb of Ibn Khafif, the 10th-century mystic credited with bringing Sufism to Shiraz.
Open In Google Maps
Shiraz, Iran
Give us feedback

Restaurant, Cafe, Coffee, Cocktails, Vegetarian
Facebook
Email
Twitter
Pinterest
Copy link
Share
Map View
Named after one of the greatest modern prose writers of Iran, Sadeq Hedayat, Café Hedayat channels the aesthetic of mid-20th-century Parisian intellectual culture that was so influential amongst a certain class in Iran. Light and airy with simple wooden tables and chairs, the atmosphere is inviting and uncluttered. If you are after a light lunch or want to avoid more rice, their salads and pasta are exceptional.
Open In Google Maps
Hedayat, Shiraz, Fars Province, Iran
+987132349152
Visit Website
Give us feedback

Café Ferdowsi is one of the most popular, cosmopolitan hubs in Shiraz, commonly frequented by young creative artists and students. With free Wi-Fi, a solid range of food and drinks, and decent vegetarian options, it’s also popular with tourists. Named after another great Persian poet (though not a native of Shiraz), Café Ferdowsi is tastefully furnished with ornate tile work and pieces of modern art on the walls. A fine selection of cakes and pastries, plus occasional live music performances make Ferdowsi stand out from the ever-expanding alternatives Shiraz has to offer.
Address: 149 Ferdowsi Street, Shiraz, Iran, +98 71 3231 6616

Faludeh is a sweet Iranian delicacy that has its origins in Shiraz, and is the perfect antidote to the relentless heat of the Persian summer. Made from noodles and a frozen syrup of rosewater and sugar, faludeh is arguably Shiraz’s second most celebrated export, after poetry. There are several faludeh and ice cream shops and cafés dotted around the city; Mahdi Faludeh on Naser Khosrow Street, and Baba Bastani on West Ghodoosi Blvd are the most famous amongst them.
Address: Mahdi Faludeh and Baba Bastani, Shiraz, Iran