A strikingly prominent feature of Iranian public spaces is the prevalence of street art – both officially sanctioned murals and subversive graffiti. Whilst the latter can be ingeniously subtle, its social commentary usually ensures its speedy removal. Revolutionary murals often commemorate martyrs of the Iran-Iraq war, or celebrate the political values of the Islamic Republic. Here we feature some of the most fascinating street art in Tehran. 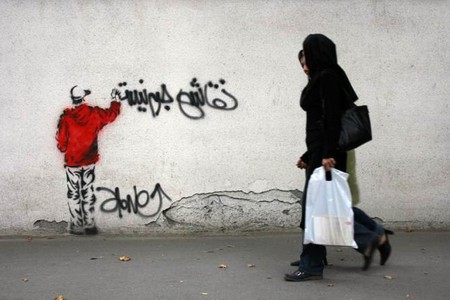 Unlike many street artists operating in Tehran, Mehdi Ghadyanloo is officially sanctioned and sponsored by Tehran’s municipal government, and he has been tasked with beatifying some of the prominent and unsightly concrete facades in the city, which are commonplace throughout the capital. His work is hyper realist in style, and often draws on surrealist imagery, depicting optical illusions or gravity defying characters. One of his most famous murals can been seen in Vanak Square, where art and architecture are merged by floating figures seemingly rolling mats over the building’s exposed windows. 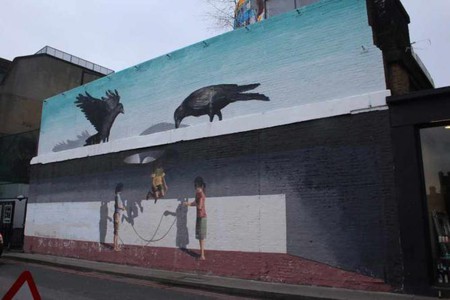 The former US Embassy in Tehran, labelled by some since the 1979 Revolution as the “Den of Espionage,” offers a stark representation of contemporary Iranian history and street art. Many of the walls surrounding the compound are adorned with anti-American and pro-revolutionary artwork, as well as slogans which read “Down with USA.” Fascinating, if a little unnerving, murals such as that of the statue of liberty depicted as a deathly grim reaper figure give an intriguing insight into the depths of Iran’s revolutionary fervor in the early 1980s.

Dubbed ‘the Iranian Banksy’, this anonymous graffiti artist works by night on the streets of Tehran, painting on roadside walls artworks that comment on the issues and phenomena faced by Iranians today. Satirical and subversive in equal measure, one famous example of the artist’s work is a calligraphic rendering of a well-known line of poetry by Rumi, which reads “Without everyone else, life goes on/without you, life doesn’t go on”, alongside a depiction of a barrel of oil or radioactive waste. A more recent work shows Descartes next to a quotation which reads “I like therefore I am.” 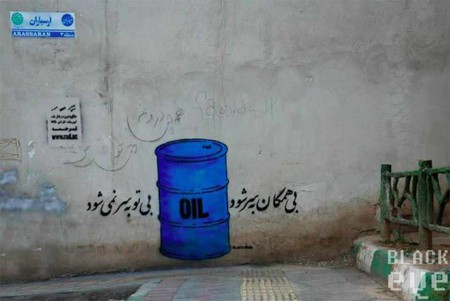 Political art and propaganda has been central to the Islamic Republic’s management of public spaces since the earliest days of the Revolution. Take a 30-minute drive through any area of Tehran and you will doubtless bear witness to half a dozen murals commemorating fallen martyrs of the Iran-Iraq War (1980-1988) or depicting the leaders of the Islamic Revolution. Two famous examples include the ‘Soldiers of the Islamic Revolution’ modernist fresco in Felestin (Palestine) Square, and the massive ‘Down with USA’ mural near Haft-e Tir, which portrays the American flag as a harbinger of war. 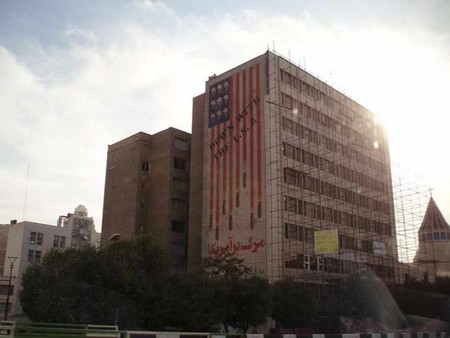 A1one is a longstanding Tehrani street artist, best known for his signature ‘calligraffiti’ style. Famous for depicting the repeated word for ‘truth’ (haqiqat), A1one’s art is vibrant, colourful, and chaotic – much like the city itself. Drawing on traditional calligraphy, his work is steeped in Iranian cultural heritage despite being unequivocally modern. He is also known for his stencil portraits of characters often caught in a bittersweet moment, or conveying an anti-war message. He is now based in Germany. 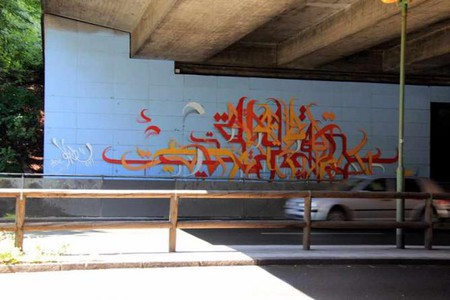 ‘Haqiqat’ mural | © Tehranwalls/Wikicommons
Give us feedback