Who is Black Hand? Searching For The Iranian Banksy

In the highly censored environment of the Islamic Republic of Iran, street art has provided an ideal tool for expression; a subversive voice that communicates what mainstream art and culture can not. Nicknamed the Iranian Banksy, the anonymous artist Black Hand has risen to prominence in the urban arts scene, stencilling the walls of Iran with social commentary and satirical protest. Here we profile Black Hand’s artistic life and some of his or her most outstanding works. 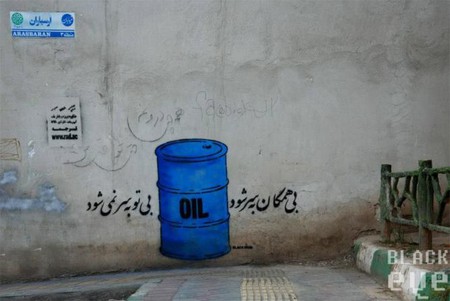 Street art has long been a byword for the underground, the experimental, and the revolutionary. By its very nature – art that is drawn on buildings, walls, or anywhere else entirely accessible to all members of the public, with no restrictions or rules as to whom the artist may be – street art is an all-inclusive medium. 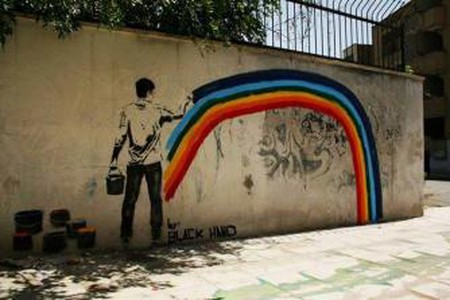 Street art has its origins in painted political slogans and protests, and developed into the full-blown artistic graffiti of today during the 1970s and 1980s, with the New York City graffiti boom and the famous murals of the Berlin Wall. The streets of Iran are historically no stranger to this form of urban art and self-expression; the build-up to the 1979 revolution was documented on the country’s walls, through thousands of angry slogans protesting the reign of the Shah. Post-revolution, however, graffiti has been controlled by the Iranian government, and is permitted only in the form of religious martyrs and revolutionary heroes, propagating the state’s ideologies.

Nevertheless, Iran‘s streets are fighting back, with a new movement of revolutionary street artists intent on questioning the status quo. Among these is the anonymous artist Black Hand, who rose to prominence in 2014 for his or her Banksy-like style and powerful social critique of aspects of contemporary life in Iran. In a country where the typical spaces for artistic expression, such as galleries, cinemas and literature, are monitored and censored, street art provides an ideal outlet for rebellious expression. 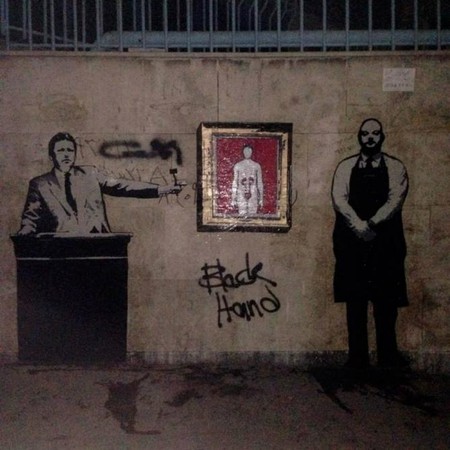 Black Hand acknowledges the unique artistic freedom that urban art provides in empowering the individual against the state, explaining in an interview with The Guardian that, “I chose street art because I want to guard against the galleries’ monopoly. Our intellectual and artistic society are underestimating and ignoring ordinary people’s power”. By drawing on Tehran’s walls, Black Hand removes the political hierarchy from the issues he or she illustrates and brings them back into the public sphere, challenging viewers to confront their reality and to question sociocultural norms. 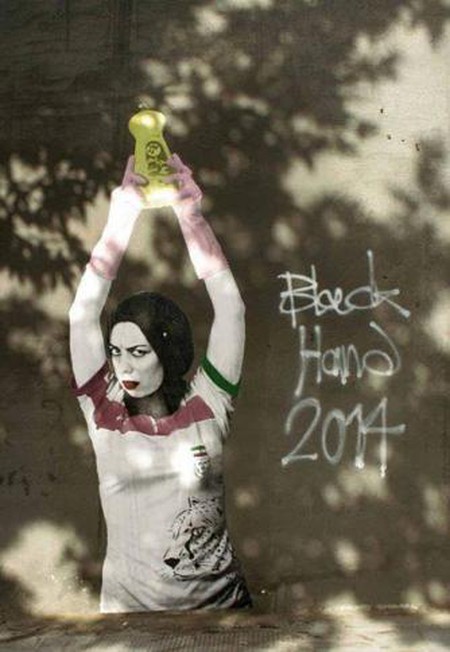 Black Hand’s art directly comments on the most difficult aspects of contemporary Iranian culture and politics, and often provides a voice for the most oppressed or vulnerable members of society. In perhaps what is his or her most famous piece, Black Hand responded to the new law banning women from attending football matches by stencilling a woman in a football shirt, wearing cleaning gloves and holding a bottle of washing-up liquid aloft like a trophy. The woman’s eyes stare directly at the viewer, posing an almost uncomfortable yet profound challenge of the viewer’s stance on this law, and women’s social position. Another work depicts a man painting a rainbow onto a wall, and is a vivid demonstration of support for gay rights, and a criticism of both Iran’s and other governments’ homophobic stances.

Black Hand’s pieces sometimes also recall the origins of street art in slogans and political messages, and as such do not always feature illustrations. In one of his or her most striking works, a YouTube link to a leaked video revealing electoral malpractice and vote manipulation in the 2009 elections is stencilled onto a wall. It is compelling both for its simplicity, and for its association with technology and social media as a tool for revolution; a notion that has very much come into play in recent years within the Middle East. Social media is essential to Black Hand’s work; most of his or her artworks are defaced or painted over mere hours after being executed, and the artist thus relies on viewers to photograph the work and disseminate it over social media. 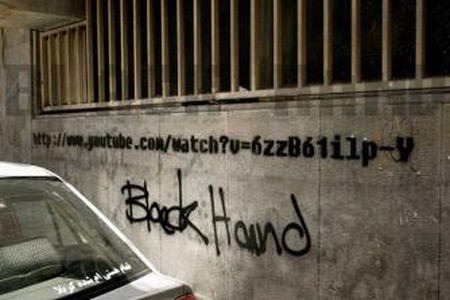 Black Hand’s artistic style is deliberately modelled after Banksy’s, and almost entirely comprises of stencilled work. In The Guardian interview, Black Hand cites both aesthetic and practical grounds for this choice of medium: Banksy is both a creative inspiration, and his famed stencilling technique is also ideal for an artist such as Black Hand who needs to secretly create his art in short periods of time. Black Hand’s stylistic similarity to Banksy could also be seen as a sociopolitical message in and of itself: by emulating Banksy’s style, he or she inevitably also evokes his controversy and liberal ideals, and draws direct yet subconscious parallels between the two in the viewer’s mind.

Despite the similarity between the two, however, Black Hand is creating a name for his or herself on the urban arts scene. The murals and slogans that Black Hand graffitis upon walls demonstrate that, in spite of overarching sociopolitical structures, the individual and their creativity cannot be stifled.