London’s graveyards and their classic gothic charm have been featured in literary, film, and actual legend for centuries. Fascinating, poignant, and sometimes eerie, here are the top eight cemeteries to visit. 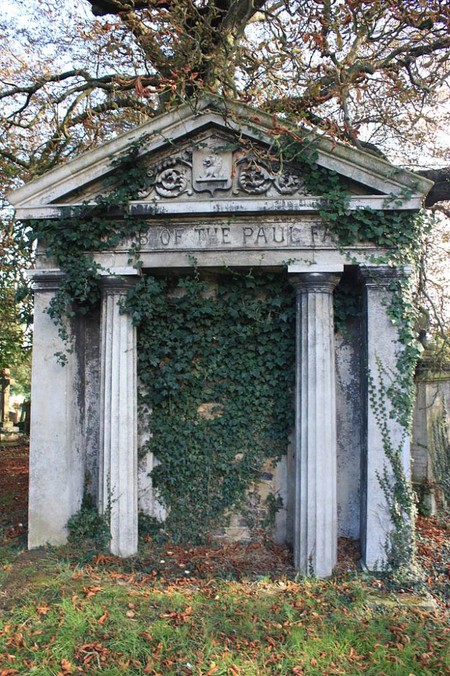 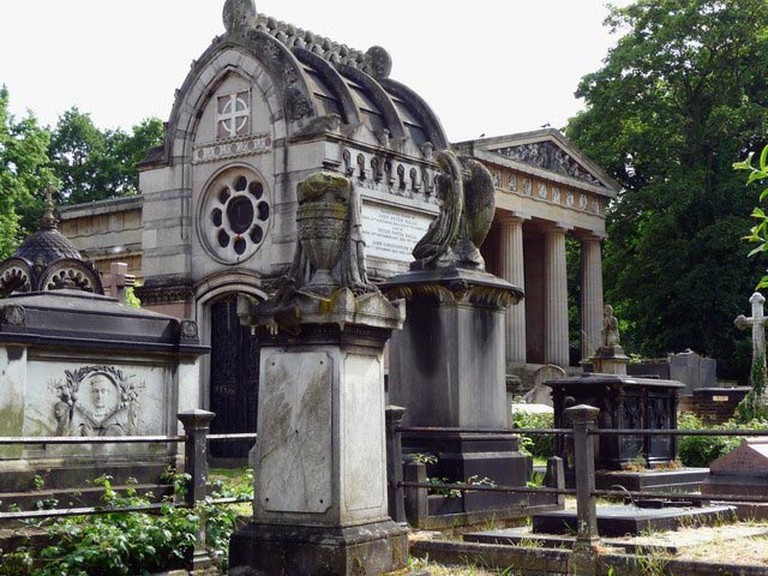 Various mausoleums, Greek Orthodox Cemetery, West Norwood Cemetery | © Stephen Richards/WikiCommons
Kensal Green is the first of seven cemeteries around the edge of London known as the Magnificent Seven, which were built to accommodate London’s growing population in the 1800s. Kensal Green, established in 1832, hosts three chapels catering to all faiths and a range of memorials stretching over 72 acres. Among the 250,000 increments at Kensal Green are W.H. Smith of newsagent fame, tea tycoon Richard Twining, and journalist John Diamond. One of the cemetery’s more curious residents is James Barry, a surgeon in the British Army, who was discovered after his death in 1865 to be a woman.
Open In Google Maps
Harrow Road, London, England, NW10 5NU, United Kingdom
Visit Facebook page
Give us feedback Bunhill Fields burial ground | © Julian Osley
The second of the Magnificent Seven, West Norwood Cemetery, gets its name from the Great North Wood where it was built. It is also known as ‘The Millionaire’s Cemetery’ due to the extravagance of its tombs and mausolea. Worth visiting is an oak tree possibly dating as early as 1540, making it over 450 years old. West Norwood hosts some of London’s most impressive catacombs, inclusing several thousand increments. Victorian cookery writer Isabella Beeton is buried at Norwood, as are Sir Henry Tate, sugar magnate and founder of the Tate Gallery, and Julius Baron van Reuter, creator of the news agency Reuters.
Open In Google Maps
Norwood Road, West Norwood, London, England, SE27 9JU, United Kingdom
+442079267999
Visit Website
Give us feedback 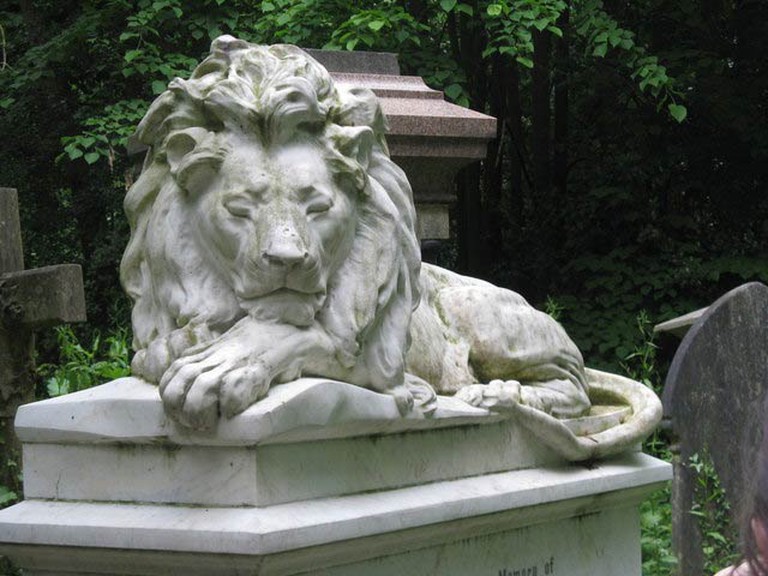 Abney Park Cemetery, London | © Dave Pickersgill
Bunhill Fields, once described as the ‘campo santoof the dissenters’, derives its name from ‘Bone Hill’. Legend has it that the fields were used as a depositing place for human bones after the closure of a nearby charnel house a few years before the cemetery was established in 1665. Bunhill Fields was unique in its time as, unlike Anglican Parish churchyards, it accepted anyone who could afford the interment fees regardless of faith, and it consequently gained fame as a burial ground for nonconformists. The cemetery also contains a Quaker graveyard with an estimated 12,000 increments. Famous people buried here include Daniel Defoe, author of Robinson Crusoe, and poet William Blake.
Open In Google Maps
38 City Road, Old Street, London, England, EC1Y 2BG, United Kingdom
+442073744127
Visit Website
Give us feedback 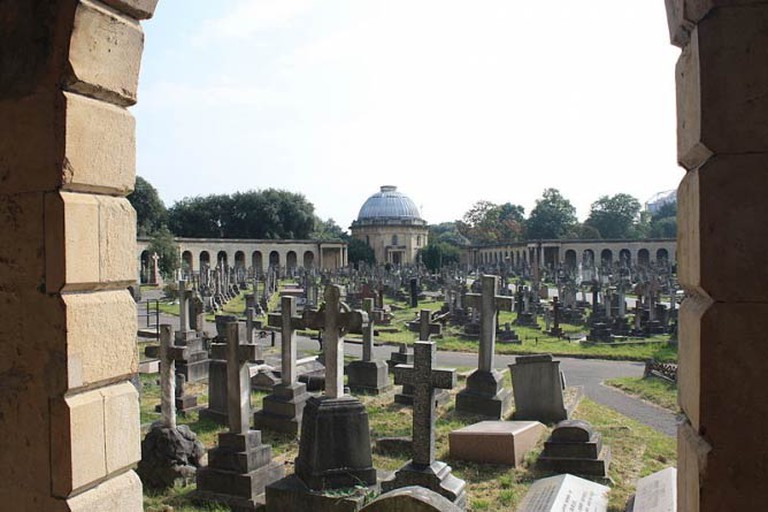 Central section, Brompton Cemetery | © Stephencdickson/WikiCommons
The liberal legacy of Bunhill Fields was maintained after its closure in 1854 by Abney Park, established in 1840 and functional until the late 1970s. Included in the Magnificent Seven, it was the first cemetery that did not have separate burial areas for different religions, rapidly becoming the most popular resting place for Victorian nonconformists and dissenters, including William and Catherine Booth, founders of the Salvation Army. Abney Park also stands apart from other cemeteries thanks to its architecture, featuring a grand entrance created in the Egyptian revival style — a contrast to the Victorian gothic architecture that dominates most cemeteries of this time.
Open In Google Maps
215 Stoke Newington High Street, Stoke Newington, London, England, N16 0LH, United Kingdom
+442072757557
Visit Website
Give us feedback

Also built in 1840, Brompton Cemetery’s design takes inspiration from St Peter’s Basilica in Rome, and mimics an open-air cathedral, featuring a domed chapel in honey-coloured bath stone and a tree-lined central avenue leading to a great circular courtyard flanked by two curving colonnades. The cemetery is home to over 35,000 monuments, 28 of which are listed, including the tomb of suffragette leader Emmeline Pankhurst and a monument to Samuel Leigh Sotheby of Sotheby’s auction house. Brompton Cemetery is no stranger to the big screen, having been featured in such films as Sherlock Holmes and Johnny English.
Open In Google Maps
Fulham Road, Kensington, London, England, SW10 9UG, United Kingdom
+443000612172
Visit Website
Give us feedback

Established in 1839, Highgate Cemetery is the resting place of many famous people throughout history and is easily the most famous cemetery in London. Most visited is the monument dedicated to Karl Marx, featuring a bust of the formidable socialist erected in 1956 by left-wing sculptor Laurence Bradshaw. Also worth seeing is the self-designed memorial of pop-artist Patrick Caulfield. Other people buried here include The Hitchhiker’s Guide to the Galaxy author Douglas Adams, poet Christina Rossetti, Victorian writer George Eliot, the wife and children of Charles Dickens, and Elizabeth Siddal, wife and muse of Dante Gabriel Rossetti, who secretly re-opened her grave seven years after her death to retrieve a book of poems he had placed in her coffin. 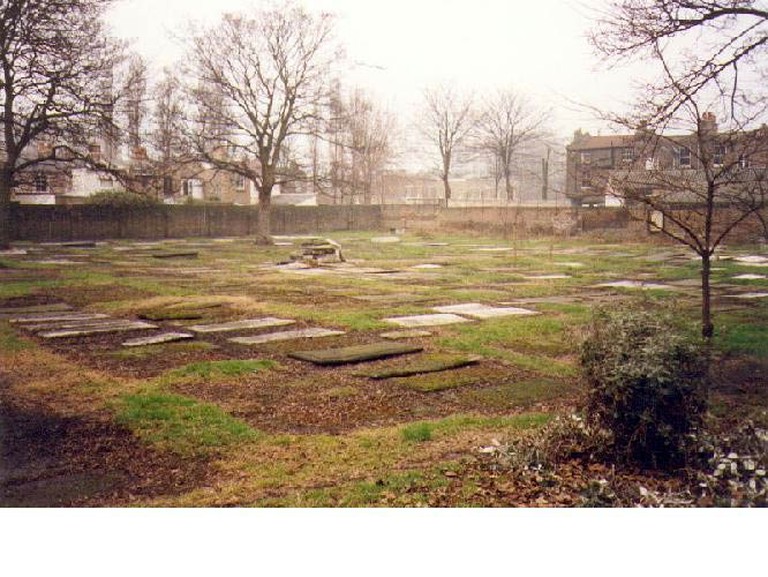 Tthe Velho Old Sephardi Cemetery at Mile End | © Ferdinand(o) Family History Site
The least famous of the Magnificent Seven, Nunhead Cemetery is arguably the most attractive. Originally named the All Saints Cemetery, Nunhead hosts a variety of mausolea, ranging from lavish monuments of the rich and famous to simpler headstones for the less affluent. Much of the graveyard is overgrown and in a poor state of repair, but has subsequently become a haven for wildlife. It is also a nature reserve and a site of the Metropolitan Importance for Wildlife. The flourishing greenery and vines creeping over the weathered tombstones, many of which list to one side, give Nunhead a sense of age and wildness not seen in London’s better-restored cemeteries.
Open In Google Maps
Linden Grove, London, England, SE15 3LP, United Kingdom
Visit Website
Give us feedback

Cemetery, University
Facebook
Email
Twitter
Pinterest
Copy link
Share
Map View
Encased in ancient-looking brick walls and looking very out of place among its modern surroundings, the Sephardi Velho Cemetery is truly a hidden gem. It was set up by a community of Spanish and Portuguese Jews fleeing religious persecution, eventually settling in Mile End and creating a community known as Sha’ar Hasamayim, ‘the Gate of Heaven’. Established in 1657, Sephardi Velho was the first Jewish cemetery opened with Oliver Cromwell’s approval. It was closed in 1737 and burials continued in the nearby Sephardi Nuevo Jewish Cemetery. Notable in both are the flat tombstones of the Sephardi tradition, a symbol that all people are equal in death.
Open In Google Maps
Bethnal Green, London, London, England, E1 4FQ, United Kingdom
Give us feedback
Give us feedback