Ten Places to Get Your Music Heritage Fix In London

London has been the muse to many a rockstar, from The Kinks’ ‘Waterloo Sunset’ to Gerry Rafferty’s ‘Baker St’. Clubs and venues aside, where would you go to get your fix of music heritage, have your guitar tuned with a side order of nostalgia, rummage around to find a classic 12” or listen to an old timer wax lyrical about the old? We have put together ten ideas to get you started. 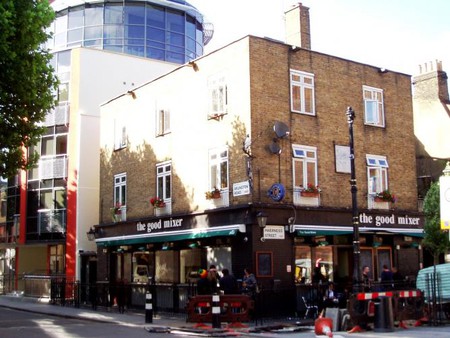 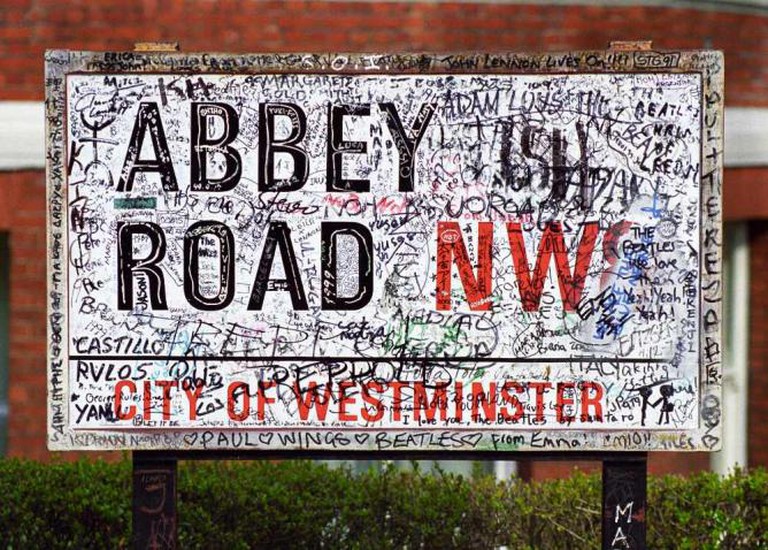 Abbey Road Sign | © Sander Lamme/WikiCommons
In the heady 90s, The Good Mixer was where Britpop starlets would come to loggerheads over the pool table long before the charts. Blur, Sleeper, Oasis, Menswear — and later the likes of Amy Winehouse — would load up their tunes on the well-stocked jukebox and shamelessly dance until closing time. Back then, those artists would get their hangover breakfast at the atmospheric Mario’s Café(immortalised in a song by Saint Etienne), and today, it’s still a low-key hideout for Camden musos seeking a hearty bacon sandwich.

Building, Park
Facebook
Email
Twitter
Pinterest
Copy link
Share
If you’re looking for the ultimate London music selfie destination, it has to be the zebra crossing at Abbey Road. The studios have produced music from Elgar to the score for Star Wars. The Red Hot Chili Peppers, Tori Amos and of course, The Beatles have all named releases after the prestigious location. Check what days the studio is open, or just look for meaningful scribbles in the plentiful graffiti on the walls and road signs. Afterwards, try the nearby gastropub, The Salthouse, which stocks a good selection of craft beers and hosts monthly ‘Supper Clubs’ in its intimate dining room. 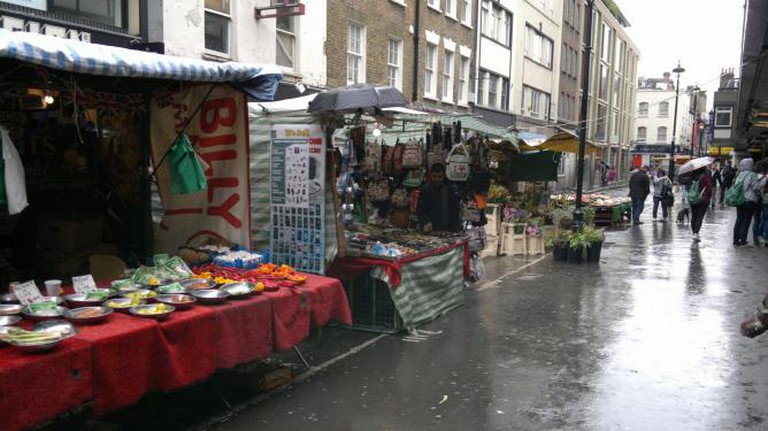 Berwick St Market | © whatleydude/Flickr
In the late 80s, St Martin’s student Jarvis Cocker was kicked out of his Camberwell abode and moved to a squat, which later became the subject of Pulp’s 1996 hit ‘Mile End’. ‘It was on the fifteenth floor, it had a board across the door…’ the song describes. If you’re also inspired by Jarvis’ fashion tastes, The East End Thrift Store is walking distance from Burdett Road and sells a huge selection of vintage garments, from classic cuts to more eccentric capes and cocktail dresses. 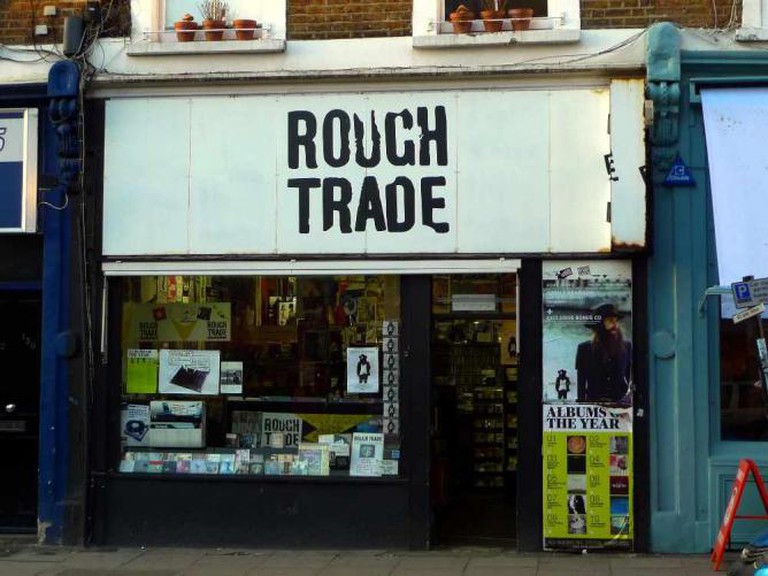 Rough Trade Records | © Ewan Munro/Flickr
The small Soho fruit and veg market immortalised at dawn on the cover of the Oasis album ‘(What’s the Story) Morning Glory?’ is also the location of the infamous The Box nightclub and was once home to record stores such as Vinyl Junkies, CD City, Sister Ray, and Mr Bongo’s. The market itself doesn’t open until 9am so you have plenty of time for a coffee and cruffin at Foxcroft & Ginger as you take in the morning air. 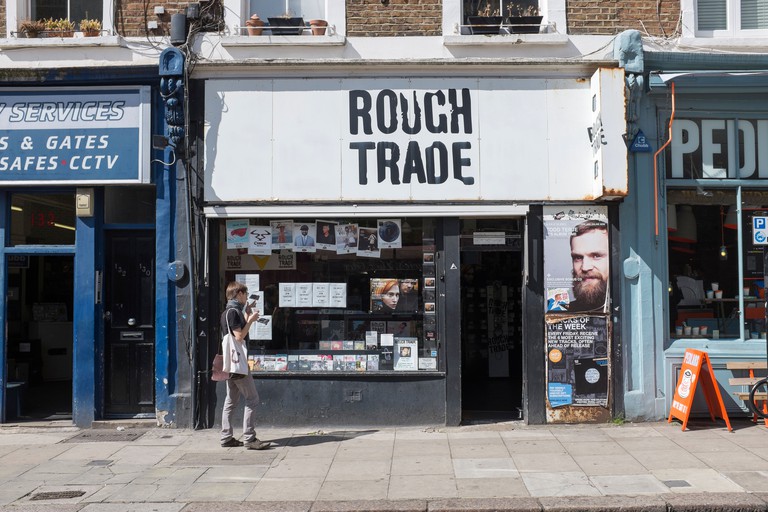 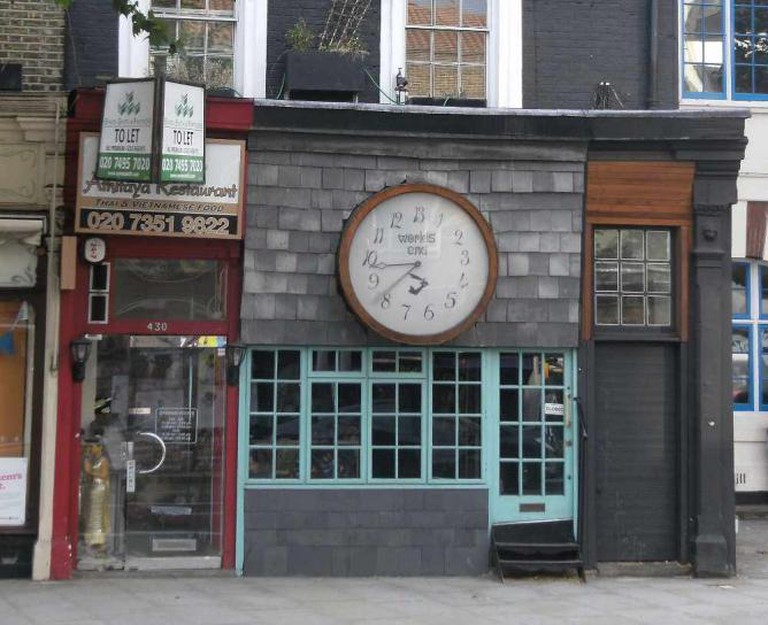 430 King's Road | © Mark Ahsmann/WikiCommons
Only reachable by footbridge or boat, this tideway island was a major jazz and blues destination in the 1960s. The legendary Eel Pie Hotel hosted many a jazz band in the 1920s, and later, Pete Townsend set up his studio there. More recently, the island spawned The Mystery Jets, who named an EP after the place. The current population is only 120, motor vehicles are banned and shops are scarce; however, twice a year Eel Pie Island welcomes the public to visit its present-day community of resident artists, including costumier Rosa Diaz, who’s famous for collecting Barbie dolls.

The two-mile-long stretch from Sloane Square to Fulham, which is King’s Road, became associated with fashion and mod culture from the 1960s onwards. The little shop unit at 430 was the location for Malcolm McLaren and Vivienne Westwood’s Sex Store, where you could have had service with attitude from one of its shop assistants like Sid Vicious, Chrissy Hynde and Glen Matlock. Since 1980, the store has been Vivienne Westwood’s World’s End and still sells unisex outfits to rebels, punks and urban pirates. 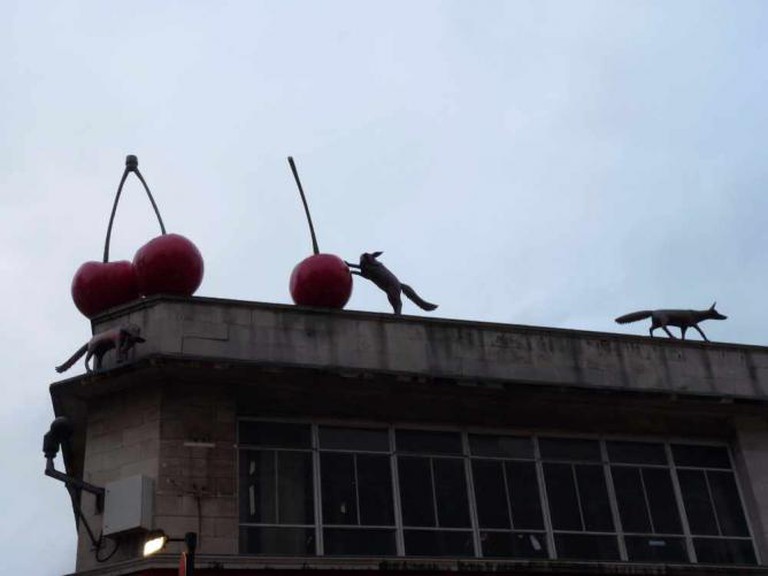 Foxes and Cherries by Lucy Casson | © Chris McKenna/WikiCommons
Named after Prince George of Denmark and often referred to as ‘Tin Pan Alley’ because of its alignment with the metalwork trade, Denmark Street subsequently became home to music publishers such as Melody Maker and NME plus numerous guitar shops and recording studios. Despite the fact that there are eight listed buildings on the street, it has, at various times, been home to The Rolling Stones, The Sex Pistols and David Bowie. The Alleycat Club in the basement of Regent Sounds — a guitar shop at number 4 which was formerly the historic Regent Studios — has live rock and roll bands most nights. 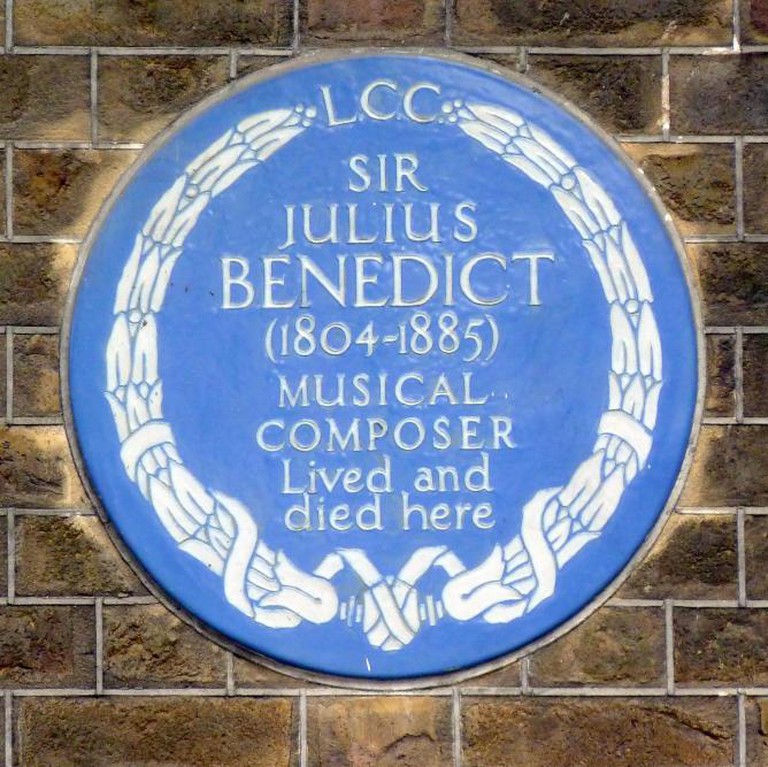 Julius Benedict | © Simon Harriyott/Flickr
Built in the 1880s and immortalised in the super-catchy song, by Eddy Grant, inspired by the Brixton riots which began here a century later, Electric Avenue got its name as it was the first market street to be lit by electricity. Today, it hosts part of the bustling Brixton Market, which sells Afro-Caribbean food, cheap seafood and bric-a-brac. Look out for Lucy Casson’s ‘Foxes and Cherries’ sculpture on the rooftop — a tribute to the market’s scavengers — or sip on an ‘Electric Boogaloo’ cocktail and check out the DJ at bourgie nearby barThe Market House. Electric Avenue, Brixton, London, UK

Museum
Facebook
Email
Twitter
Pinterest
Copy link
Share
This 18th-century garden square was home, from 1960 to 1995, to the now demolished EMI House, where Angus McBean shot The Beatles for the covers of ‘Please Please Me’ and ‘Let It Be’. Composer and conductor Julius Benedict also lived there and is commemorated with a blue plaque. These days Manchester Square is home to the fine art museum, The Wallace Collection, with its courtyard garden restaurant, which is open early enough to serve decadent breakfasts, including the rockstar-friendly truffle omelette with vintage champagne.
Give us feedback