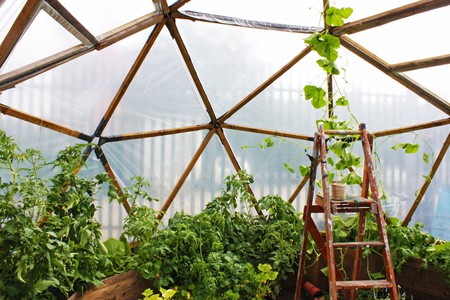 As a new decade begins, the population has awakened to a looming climate crisis. It’s no longer enough to trudge between towering skyrises and fluorescent offices. For those Londoners who want to help shape a greener city, these four organisations have transformed once concrete landscapes into eco-friendly gardens.

In July 2019, temperatures hit 37.7C (100F) at Kew Gardens; sweating bodies tumbled into the ponds at Hampstead Heath, and pavements shimmered under a sticky haze. London is getting hotter, drier, and the air is polluted.

Though trees can be used to remove pollutants, an increasing population and the need for more housing mean it’s become difficult for green spaces to be created; land is valuable in London, and doesn’t stay undeveloped for long. As Mayor of London Sadiq Khan states, “There’s not enough space to make parks.” Instead, we must reimagine the urban landscape we have at our fingertips and turn these surplus industrial spaces into verdant oases.

Agamemnon Otero has been creating renewable energy systems for years. In 2011 he fixed cooperatively-owned solar panels onto social housing to help reduce the community’s energy bills – however, he noticed that once the panels disappeared onto the roof, they became out of sight and mind. The discussion around the environment stopped.

Many people, out of necessity, prioritise food, health, education and transport before energy, so Otero decided to create a project that tackled all these issues – Energy Garden has built gardens atop 34 overground stations, often fitted with solar panels. It offers a place for people to grow crops, collaborate with others, participate in educational workshops and invest in a cleaner London.

Volunteers are involved with the development and maintenance of the gardens from the very beginning. The process starts with a member of the public nominating their station via the website, getting a group together, and working with a designer to decide how the proposed garden will look once it’s approved. To get involved with your local station, Londoners can reach out to the organisation via email.

“Transport for London is the biggest consumer of energy and emitter of carbon in London,” Otero says. “There are 2.4 billion passenger journeys a year.” As the average wait time on the overground is 14 minutes, Energy Garden has opened up a space to discuss these problems. “This project is about making people aware, in a digestible way, of green energy systems in their daily commute.” 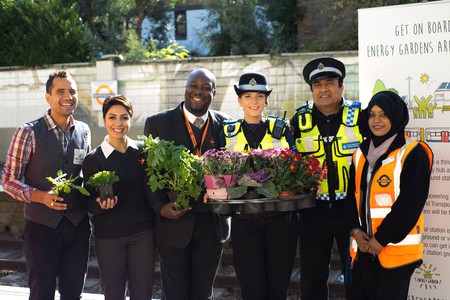 For many inner-city dwellers, there is very little access to green space; this can be particularly difficult for young families. Sequestered between St Giles in the Field and Shaftesbury Avenue, The Phoenix Garden is worlds away from its brick and glass surroundings. Here, the tropical plants and warbling birdsong offer a respite from the chattering, fast-paced foot traffic of Covent Garden.

The project has its roots in the 1970s, when there was a scheme to demolish Covent Garden and replace it with a bypass. However, a grassroots campaign successfully protested against the construction and created six community gardens on previous bomb sites left over from WWII. When the last closed in 1983, Covent Garden Open Spaces moved to this site – a concrete car park set atop rubble-filled cellars and within weeks, fly-tipped. “Our landscape is that of rubbish and void spaces,” Chris Raeburn, who has been the gardener here for 20 years, explains. “This massively affects water drainage, and traditional styles of gardening don’t work.” Here, there is no watering, no weeds, no pests and no waste.

Wildlife is at the heart of the project. “It’s important to have a dense cover of dead wood for bumblebees,” Raeburn says. “Even though it looks ugly.” However, the surrounding community is its priority, which means for the wildlife to work, the garden must first be readable as an ornamental space. The residents of surrounding social housing are often forgotten by the tourists and transient working community – but not by the garden. “Locally there are three primary schools, and we work with a youth community centre,” Raeburn says. “We did a series of intergenerational workshops, and I was encouraged to learn that wildlife was their top interest.” Those looking to volunteer can drop in on Tuesdays. 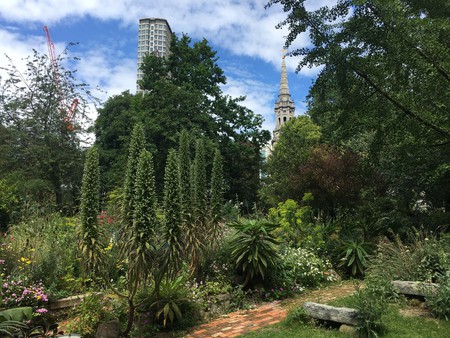 Somers Town, sandwiched between Euston and Kings Cross, has continuously been under the hammer. As houses are demolished to make space for new transport links, many residents feel like they no longer have control over where they live. “Communities here don’t feel included in the decision-making when it comes to big development,” says Gwen Mainwaring, head of food and events at Global Generation. “By creating a garden in this space, we’re giving them back a sense of ownership.”

The purpose of The Story Garden is to enable people to come together in a more connected sense and create the stories that they want for their community, be it through cooking, gathering in the roundhouse or getting creative at Central St Martin’s MAKE space. There are community beds where groups can grow crops, and they are guided about what to plant when.

Environmental education is at the heart of this project, with the younger generation taught how to breathe life into a concrete space. For legal reasons, Global Generation has been instructed not to plant in the ground, so they have become masters of manipulating construction materials into the perfect flowerbed – be it a skip or container. The Story Garden is one of the few in London to offer twilight gardening – from March onwards, visit on Thursday from 5-7 pm to end your day with your hands in the soil. 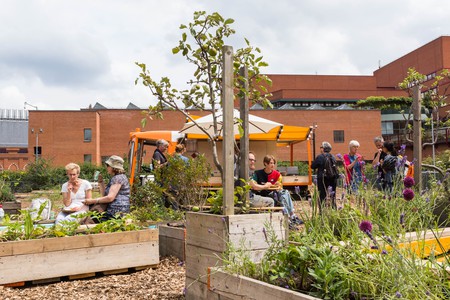 London is ranked as one of the loneliest cities in the world; but one way to meet people is through gardening. “It’s very sociable,” says Paul McGann, founder at Grow Tottenham. Originally from Dublin, where many houses have the space for occupants to get green-fingered, McGann was surprised to find it wasn’t the same here. “I wanted to create a space where people can grow things. Growing forces you to look forward and it’s good to take care of something.”

McGann has previously had gardens at Elephant and Castle; however, he’s continuously moved on by developers, and this is his last year at Ashley House, once a civil engineering depot. “We’re developing expertise in turning temporary spaces into community gardens,” he jokes. Every time he sets up a new space, he allows the local community to build with him. Volunteer days are organised immediately, and the garden is formed week-by-week. “By doing it this way, you get a project that interests the community. People are allowed to insert themselves within the space.” As well as providing workshops during the day, there’s also a club at night. Reach out via the website to get involved with any future plans.

One of the first things McGann did in Tottenham was create a wildflower meadow, with 80 tonnes of mud spread onto the carpark. “Wildflowers can grow in poor conditions, and they’re great for attracting pollinators and birds.”

Like the other three gardens, Grow Tottenham proves that beauty can be born from the bleakest of places. These organisations are not deterred by concrete, waste or imposing regulations but instead, let their imaginations create mini-Edens within a sometimes suffocating metropolis. 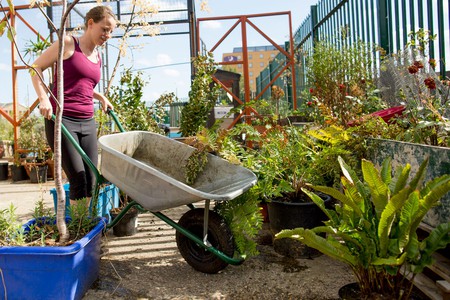