A Guide to Five of the Top 20th-Century London Landmarks 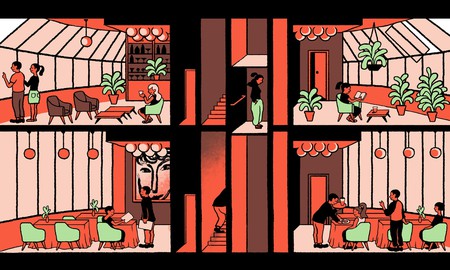 From an Elizabethan-style playhouse to the Brutalist beauty of the Barbican, London has been gifted a diverse range of architectural gems over this 100-year period. Take a walking tour of five of the capital’s most striking examples of 20th-century architecture and discover some other unmissable buildings along the way.

As one of the most iconic landmarks in London’s cityscape and the 10th tallest building in the UK, the BT Tower was the capital’s worst-kept secret after it officially opened in 1965. It was protected under the Official Secrets Act as the tower was responsible for transmitting television signals and other data, including precious military information – so even taking photos of the building was forbidden. It owes its intriguing shape to the placement of microwave aerials, but also because there were concerns of an impending nuclear attack. Architects Eric Bedford and G R Yeates noted that the only buildings left standing after nuclear blasts in Hiroshima and Nagasaki were round, enabling the blast wave to surge around them, and so this influenced the BT Tower’s design. It was closed to the public in 1971, but the revolving restaurant at the top remained open until 1980. If you’re lucky, there’s still the chance to visit it once a year in September through Open House London’s ballot.

Fun fact: The restaurant on the 34th floor took 22 minutes to revolve and was run by holiday camp extraordinaire Sir Billy Butlin.

Where next: It’s a 13-minute walk from BT Tower to Senate House.

Architectural pit-stops: Head back down towards Goodge Street station where you’ll pass Heal’s, one of London’s best-known furniture stores, which has been on the site since 1818. Then stop off at Chenies Street to see the ‘Eisenhower Centre’, an abandoned Tube station that was used as a headquarters by US General Dwight D Eisenhower, who later became president, during World War II. Just down Alfred Place is The Building Centre, which regularly holds architecture exhibitions that are open to the public. On Bedford Square you’ll find gorgeous examples of Georgian architecture and, while the garden isn’t usually open to the public, you can gain access during Open Garden Squares Weekend every June. 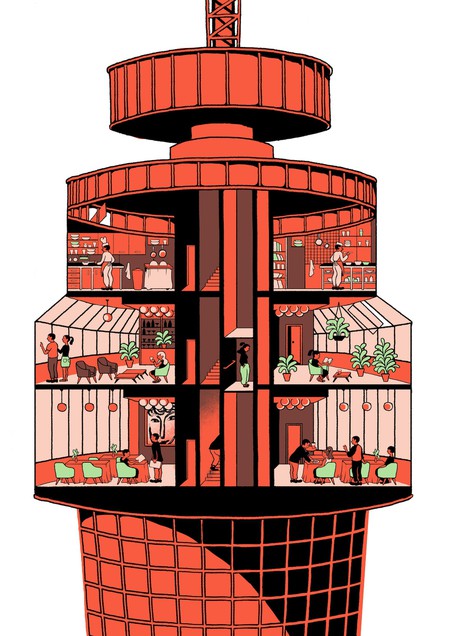 Senate House was completed in 1937 by Charles Holden, the leading designer of Art Deco architecture in the capital. He was responsible for designing many of the city’s iconic Tube stations, thanks to his collaboration with Frank Pick, the managing director of London Underground. Off the back of his success with 55 Broadway (another London Transport building), he was commissioned to design Senate House in Bloomsbury by the University of London, which resulted in the imposing 64-metre-high Portland stone-clad building.

The university’s first chairman Lord Macmillan said: ‘Future generations will pronounce it to be one of the finest examples of 20th-century architecture,’ and his prediction was right – it was given its Grade II-listed status in 1969 and stands as an imposing monument to the power of 1930s Modernism. It’s worth stepping inside the library to check out the stunning Art Deco interiors – Holden’s attention to detail can really be appreciated here, where everything from the ceilings to the drain pipes were given the decorative treatment. Senate House also organises exhibitions and events, including regular walking tours around Bloomsbury – find out more here.

Fun fact: Senate House features in many Hollywood blockbusters, from Batman Begins (2005) to The Theory of Everything (2014). It was also the inspiration for George Orwell’s ‘Ministry of Truth’ in his dystopian novel Nineteen Eighty-Four (1949).

Where to next: It’s around a 40-minute walk from Senate House to Barbican.

Architectural pit-stops: If you’re a fan of Art Deco buildings in particular, you could make a quick detour to the former Daimler car hire garage on Herbrand Street, or continue down Montague Street where you’ll pass the British Museum – the first national public museum in the world. It’s worth stepping inside to see the beautiful glass ceiling of the Queen Elizabeth II Great Court, designed by Foster + Partners. There’s also the opportunity to take a detour to the 19th-century home of Sir John Soane next to Lincoln’s Inn Fields (the largest public square in London), which holds his fascinating collection of architectural treasures, classical sculpture and paintings. If you decide to walk down Charterhouse Street, you’ll pass the famous Smithfield Market, which has been on the site since the 12th century. The current 19th-century building was designed by Sir Horace Jones – the architect behind Tower Bridge and both Billingsgate and Leadenhall Markets. 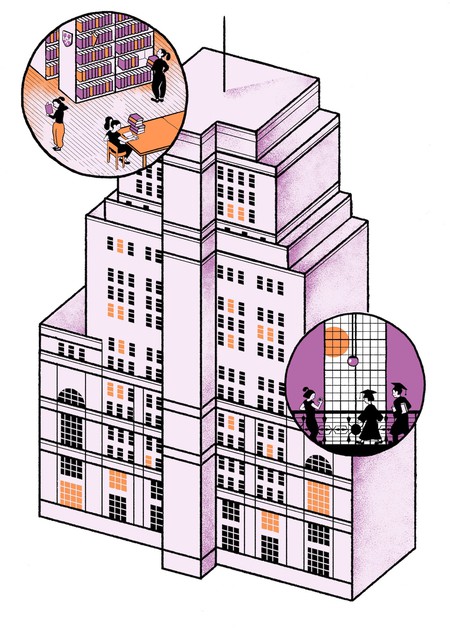 The Queen referred to the Barbican as ‘one of the modern wonders of the world’ when she opened it in 1982 and it’s certainly one of London’s best examples of Brutalist architecture. The Grade II-listed concrete ‘ziggurat’ was designed by architecture firm Chamberlin, Powell and Bon, which is also known for its groundbreaking work on the nearby Golden Lane Estate. The firm had a utopian vision for this part of the city after almost all the buildings in the Cripplegate ward, as it was then known, were razed to the ground during World War II, with only 48 people living in the parish by the end of the war. The residential estate is home to more than 4,000 people and is made up of a three of London’s tallest residential towers, 13 terrace blocks, two mews and The Postern, Wallside and Milton Court.

The complex also includes the Barbican Centre – Europe’s largest performing arts centre. If you head straight through the centre from Silk Street, you’ll enter the estate via doors that lead into the stunning Lakeside Gardens and Terrace area. Possibly one of the most interesting features of the Barbican is the huge glass conservatory sat on top of the theatre’s flytower, which is home to more than 2,000 plants and trees, as well as some resident terrapins and koi carp.

Fun fact: ‘Barbican’ used to be the street name of a busy commercial area in Cripplegate, which was named as such due to its association with the nearby fort of Roman London – the word ‘barbican’ comes from the Latin barbecana, which referred to a tower gateway or fortified outpost of a city.

Where to next: It’s a 25-minute walk from Barbican to Tate Modern.

Architectural pit-stops: On your journey, you’ll walk past Powell & Moya’s 1970s Museum of London (as well as Roman fort ruins dotted around the roundabout), before reaching Little Britain, a tiny district of the City of London that’s packed with history – it was mentioned in Charles Dickens’ Great Expectations (1861) as the location of Jaggers’ office. There’s also pretty Postman’s Park, which is a short distance from Sir Christopher Wren’s masterpiece, St Paul’s Cathedral. If you’ve got time, it’s worth climbing the 259 steps up to the dome’s Whispering Gallery, which gets its name from a quirk in its construction that causes the sound of a whisper to be heard on the opposite side. Then head over the River Thames via Millennium Bridge (it was nicknamed the ‘Wobbly Bridge’ due to the fact pedestrians felt it swaying when it first opened), where you’ll reach the Tate Modern. 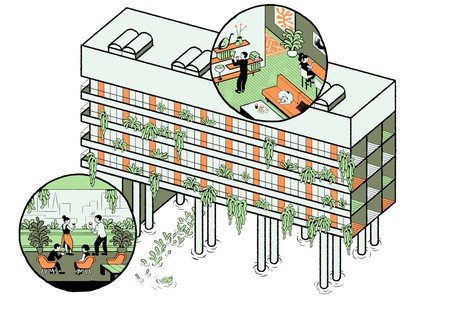 Have you ever thought that the Tate Modern bears a resemblance to Battersea Power Station? That’s because it was designed by the same architect, Sir Giles Gilbert Scott, who was also responsible for London’s iconic red telephone boxes and Waterloo Bridge. Tate Modern was formerly Bankside ‘B’ power station – the first oil-fired power station in Britain. The chimney’s height at 99 metres was deliberately constructed to be shorter than St Paul’s Cathedral opposite, with the building work taking place in two phases between 1947–52 and 1958–63. Due to the dramatic rise in oil prices, the power station closed in 1981 and stood under threat while its future was determined. Suggestions for transforming the building ranged from an opera house to a hotel.

Eventually Tate took on the industrial gem, with the then-relatively unknown Herzog & de Meuron winning a competition to redesign the power station. The project cost £134 million and took five years, opening in May 2000. Herzog & de Meuron were commissioned again to design a new extension to the building, the ‘Switch House’, a 64.5-metre-high pyramidal tower of twisting bricks and glass, which was completed in 2016.

Fun fact: The Turbine Hall is a single, vast space that runs the whole length of the building and represents its original height. The world’s greatest contemporary artists have showcased their work in this space, including Louise Bourgeois, Anish Kapoor, Ai Weiwei and Tacita Dean.

Where to next: Shakespeare’s Globe is practically Tate Modern’s next-door neighbour – just a three-minute walk away.

Architectural pit-stops: While there isn’t much between the Tate Modern and Shakespeare’s Globe, there’s plenty to explore along the South Bank afterwards if you have time. Take a six-minute walk east of the Globe and you’ll find the remains of Winchester Palace on Pickfords Lane, the 13th-century home of the powerful Bishops of Winchester. There’s also the stunning Southwark Cathedral next to Borough Market, which has great literary associations, including Shakespeare, Chaucer’s friend Gower, Harvard and Dickens, and has been a place of worship for more than 1,000 years. Head west and you’re greeted with other wonderful 20th-century landmarks, including Sir Leslie Martin’s Royal Festival Hall and Sir Denys Lasdun’s controversial concrete National Theatre – check out our Brutalist walking tour to find out more about these icons. 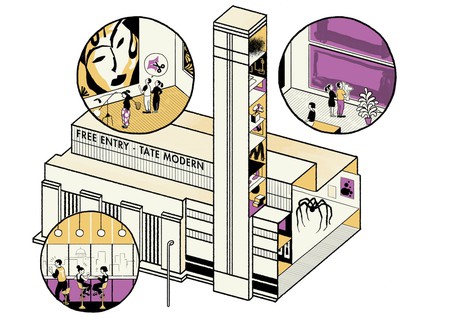 The Elizabethan-style playhouse was actually built in 1997. The project was initiated by the actor, director and producer Sam Wanamaker, who pioneered the creation of a faithful reconstruction of the original 16th-century Globe Theatre. Wanamaker persevered for more than 20 years to achieve his vision, working closely with historian John Orrell and Theo Crosby of famous design firm Pentagram to create an authentic replica.

The timber-framed building is constructed entirely out of English oak, without any structural steel at all and it retains the classical Greek and Roman architectural influences that the Elizabethans admired, with ‘Herculean’ pillars decorated to resemble marble. The amphitheatre-style setting maintains the simplistic bench seating arrangement, although there’s now only capacity for 1,400 spectators rather than the original 3,000 due to health and safety. While the open air theatre only puts on performances during April to October due to the unpredictable British weather, the adjoining Sam Wanamaker Playhouse is a real treat in winter – an intimate, candlelit indoor theatre that’s based on the old Jacobean playhouses of London.

Fun fact: The thatched roof on the Shakespeare’s Globe is the first and only one to be permitted in London since the Great Fire of 1666. It was actually wadding from a stage cannon that set light to the thatch during a performance of Henry VIII that caused the original fire back in 1613. 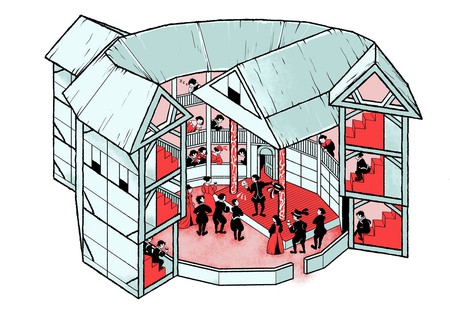