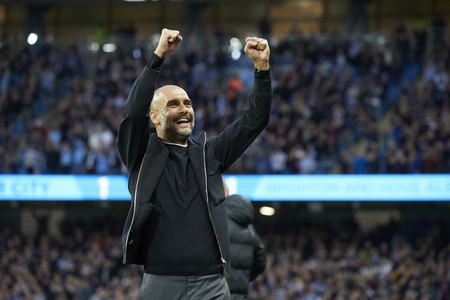 Manchester City romped to the Premier League title last season, playing scintillating football and winning a record-breaking 100 points in the process. Amazon Prime’s new All or Nothing: Manchester City documents their astonishing season, so we headed to Manchester to find out how they achieved their success.

Even by Premier League standards, the Etihad Complex is incredible. With an adjoining bridge to the Etihad Stadium it features, among other things, 16 outdoor pitches, indoor training facilities, an academy stadium and an eight million-litre underground tank that collects and recycles rainwater. The training pitches have three types of grass and sand levels to match opponents’ grounds and the entire project cost £200m.

Recruiting players from all over the world means that language barriers obviously exist. While learning English is an obvious priority to new players, learning “football English” is considered essential. The club make a point of of teaching players the likes of “man on”, “time” and “switch it” long before language needed off the pitch.

The men’s, women’s and youth sides at every age group are taught the same underlying principles on how to play the game. Whether it’s high pressing, playing out from the back or creating triangles of players, every single footballer at Manchester City is taught the same football philosophies. 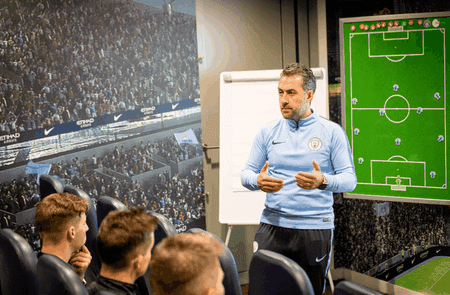 One of the messages the coaches highlighted on the day was “make sure you can see three corner flags”. Essentially, keep your head up and try to see as much of the pitch as possible, thereby enabling you to assess the available options and, hopefully, make the best decision.

In the same way that every player at the club receives the same coaching, all the facilities are shared. No matter a player’s age or gender, everything is open to everyone. In the canteen or the media centre, a player from the U18 side is just as likely to be mingling with Kevin de Bruyne or Steph Houghton as a teammate that they’ve just been playing with. 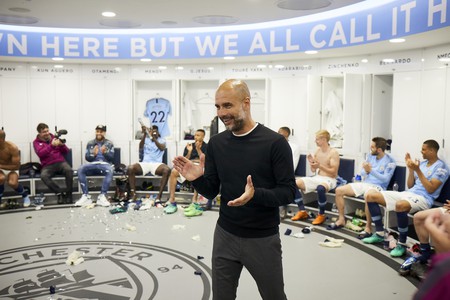 The club’s coaching network is worldwide and their assessment is relentless. It’s not uncommon for coaches to wear GoPros on their chests during their work so that they can watch their own and their colleagues sessions back again. It ensures constant evaluation and improvement from the top down.

When Pep Guardiola arrived at the club he brought in a club-wide dietary plan and enforced a blanket ban on sugary snacks and drinks at the club, not just for the players, but everyone. While they’ve reaped the benefits it hasn’t stopped people “smuggling in contraband from the local ASDA” when they need an afternoon pick-me-up, according to one member of staff we spoke to.

As well as the strict diet, the first team stay in the four-star hotel facilities on site the night before home games. There is an indoor pitch where the oxygen levels can be adjusted to match different altitudes. Players can rehabilitate on a hydro-treadmill with underwater cameras. The owners viewed 70 different training complexes from different sports all over the world before deciding on the design of the Etihad Complex. Essentially, every single minute detail is considered and every single minute detail contributes to the club’s success.

All eight episodes of Prime Original All or Nothing: Manchester City are released on Friday 17 August.