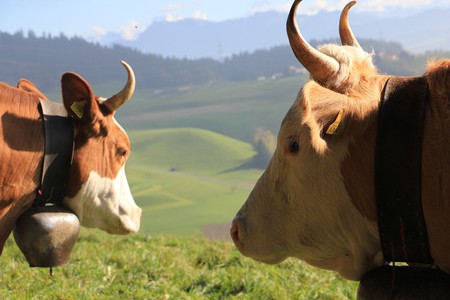 Earlier this month, cows from France, Italy and Switzerland battled it out at the foot of the Mont Blanc mountain. Mila, an Italian cow, triumphed over the competition and now boasts the lofty title of ‘Queen of the Mont Blanc.’ Next year she’ll be able to defend her title in Switzerland.

The tournament isn’t some sort of cow Lord of the Flies death match, it’s part of the annual International Game of Queens, organised by the three countries to honour a centuries-old tradition of cow battling.

Don’t come hoping to see a bloodbath. Few cows are seriously harmed, as their horns are blunted so it’s usually a well-behaved competition. But each duel can last up to 40 minutes and is full of plenty of bellowing, shoving and head-butting. 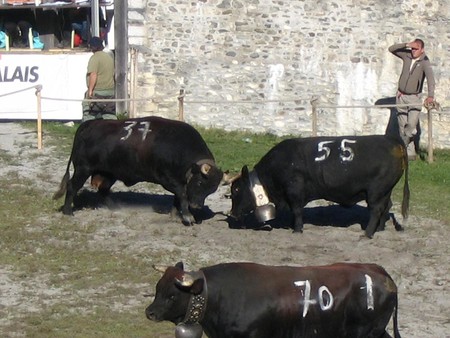 All of the cows that compete are Herens, a small but brawny breed that’s named after the Val d’Hérens in Switzerland. The females are naturally aggressive and competitive. Locking horns decides who leads the herd for the year.

Each year, around the end of summer, herders from the three countries gather their best cows around the Mont-Blanc. The cows aren’t goaded into fighting, they are simply put into a ring and they pick their own opponent. At the end of the day she who remains undefeated is crowned the Queen.

Herens aren’t big money makers. Sure, winning cows can fetch a pretty penny at auction, but they aren’t known as big producers of beef or milk. ‘Anyone breeding Herens cattle does so out of passion,’ one breeder from Valais explains. ‘It’s about honour, pride and tradition, and above all it gives you joy.’ She takes her cows jogging before fights to make sure they are in prime condition.

Next year the competition will be hosted in Valais, Switzerland. Expectations are high as the Valaisans have yet to win in the prestigious competition. Tensions are high as the Valaisans are intensely proud of their cow-herding traditions, particularly as it is from their home region that the sport gained prominence. The region’s failure to triumph so far is kind of like Brazil’s footballing superstars never having won the World Cup.

Each year regional events are held in France, the Aosta valley in Italy, and the canton of Valais in Switzerland. Thousands flock to watch at these popular events. One of the first official fights took place in Valais in 1923; the tradition goes back much further, however, as herders had been arranging informal cow bouts amongst themselves long before.

Today, the cows battle it out depending on weight categories (usually lightweight, middleweight and heavyweight) to ensure a fair fight and at the final showdown in Valais the ‘Queen of Queens’ is named. In Switzerland, cow-fighting is known as combat de reine or ringkuhkampf, depending on which part of Switzerland you are from. It’s definitely one of the must-experience traditional customs. Just don’t try and understand it.