The Story of Haus Hiltl, the World's First Vegetarian Restaurant 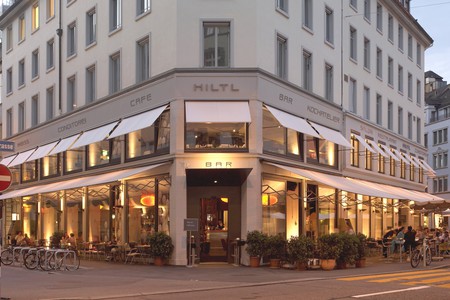 Swiss food is often associated with meat and potatoes, so it might seem surprising that the country is actually home to the first ever vegetarian restaurant. We look into the story of how Haus Hiltl came about.

Chateaubriand, steak tartare, meat-based fondues such as Bourguignonne and Chinoise: all are great examples of Swiss food. However, over a century ago, Switzerland opened its first restaurant with no meat on the menu at all. Not only was it the first of its kind in Switzerland, but around the world, too.

Founded in 1898, Haus Hiltl is listed in the Guinness World Records as the world’s oldest vegetarian restaurant. To this day, it is still run by the same family as when it opened and is in its fourth generation of restaurateurs. And while Haus Hiltl is now one of Zurich’s most popular and trendiest restaurants, loved by vegetarians and carnivores alike, this wasn’t always the case.

The restaurant was originally called Vegetaria

A family of German immigrants founded a restaurant called Vegetaria in 1898, but the establishment didn’t have much success. At this point in history, vegetarians in Switzerland were nicknamed ‘grazers’ and the idea of not consuming meat was considered extravagant, to say the least.

In the 19th century, a doctor recommended the vegetarian diet

In 1898, German tailor Ambrosius Hiltl moved to Zurich. In 1901, he became seriously ill with a bad case of rheumatism, which made it almost impossible for him to continue with his profession. Desperate to find a solution to his predicament, Hiltl discovered the doctrine and vegetarian diet proposed by famed Swiss doctor Maximilian Bircher-Benner – the pioneering nutritionist who invented muesli – and decided to stop eating meat.

From tailor to restaurateur

Two years later, in 1903, Switzerland’s only vegetarian restaurant, now called Vegetarierheim, was in dire straits. Luckily, Ambrosius Hiltl, feeling better but now no longer working as a tailor, came to the rescue. Hiltl started working as the Managing Director and revamped and renewed the establishment to make it more appealing to the general public. Thanks to his intervention, the restaurant began to be more successful and, in 1904, after marrying local beauty Martha Gneupel, Ambrosius Hiltl took it over and renamed it Haus Hiltl. Three years later, he became a Swiss citizen and bought the property itself with his wife. 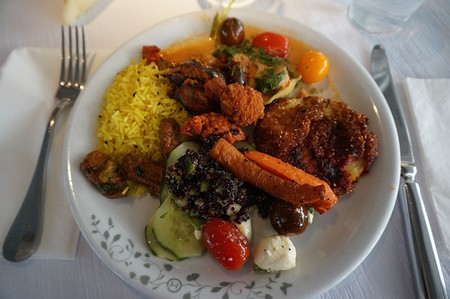 A family of trendsetters

Haus Hiltl has never stopped being innovative. In 1931, it became the first restaurant in Zurich to have an all-electric restaurant kitchen. A few years later, the restaurant was taken over by Hiltl’s sons Walter and Leonard who, as avant-garde as their father, introduced even more changes, especially to the menu. Notably, when Leonard’s wife Margrith Hiltl travelled to India to attend a vegetarian congress in Delhi, she came back with many new recipes and ideas. Incorporating Indian cuisine into Hiltl’s menu turned out to be a great success. The new menu was very well received and the restaurant became increasingly popular, even with important figures such as the then-Indian prime minister Morarji Desai. The restaurant was later taken over by Leonard and Margrith’s son Heinz who renamed it Hiltl Vegi. In the 1990s, his son Rolf revamped the restaurant again, extending its opening hours and making it more popular with Zurich’s young crowd.

Nowadays, visitors can indulge in all sorts of delicacies at Haus Hiltl from early in the morning until late at night – not only in the original location on Sihlstrasse, but also at Hiltl Dachterrasse on trendy Bahnhofstrasse; at Hiltl Sihlpost, located inside Zurich’s main station; at Hiltl Langstrasse in Zurich’s multicultural district 4; at Hiltl Pflanzbar at Paradeplatz; and during summer at Strandbad Mythenquai and at Seebad Kilchberg. Despite being the world’s oldest vegetarian restaurant, thanks to its constant innovation, Haus Hiltl has a young vibe and fun atmosphere and today, it is popular with both vegetarians and meat-eaters alike.

The menu offerings at Haus Hiltl are, of course, strictly vegetarian with many interesting vegan options as well. All dishes are prepared with quality ingredients, devotion and attention to detail. The kitchen brigade focuses on local and regional produce and fresh, ripe fruits and vegetables, while all wine served in the restaurant is vegan.

Going beyond the restaurant

Haus Hiltl also caters to those who wish to serve delicious vegetarian dishes at home. Their homemade specials, along with many other vegetarian and vegan delicacies, are for sale at Hiltl Shop located directly beside Haus Hiltl, which is also the first vegetarian butchery in Switzerland. For those who feel particularly inspired, the Hiltl Akademie offers group or private vegetarian cooking courses. 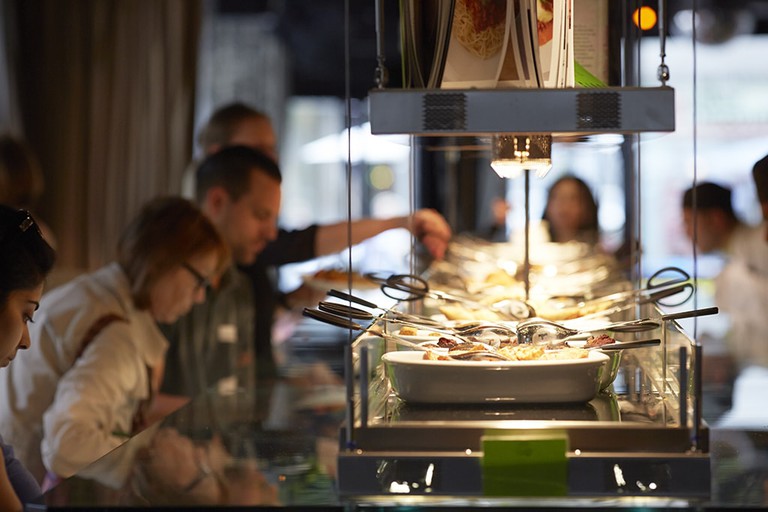 Haus Hiltl | © Switzerland Tourism
Dine out in the world’s first vegetarian restaurant in Zurich. Today, you can sample a wide range of vegetarian options at Haus Hiltl’s buffet or order à la carte, choosing from over 100 dishes with influences from around the world. A must-try is the Hiltl Tartar, a signature dish made with okra, eggplant and spices. And if you think that vegetarian food is boring, think again: Hiltl offers specialties like aubergine tartare, saffron gnocchi and a very special mushroom stroganoff. They also have a wide range of mouthwatering vegan desserts, all for a decent price.
Open In Google Maps
28 Sihlstrasse, Zurich, 8001, Switzerland
+41442277000
Visit Website
Give us feedback
Give us feedback