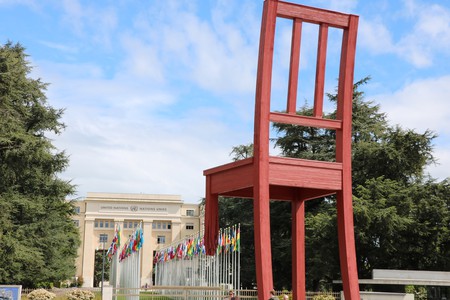 A short trip from Geneva’s main station of Gare Cornavin takes you to Place des Nations, a wide, open square lined with choreographed fountains. You may wonder why there is a giant chair with a broken leg towering into the sky, and here’s why.

In 1997, a treaty to ban the use of anti-personnel mines was signed into action. It became known as the Ottawa Treaty, or the Mine Ban Treaty. At the same time, to encourage nations to sign on to the treaty and stop the use of landmines, the non-governmental organisation Handicap International commissioned Swiss sculptor Daniel Berset to create the Broken Chair to draw attention to the victims of mines.

The result was the 12 metre high and 5.5 tonne sculpture with its left leg broken in half that now stands over Place des Nations. It was initially only supposed to stay for three months, but now it has been there for nearly 20 years. There is little sign that it will be removed any time soon after it was recently renovated and has become a landmark of International Geneva.

But was the movement successful? Handicap International was not working alone in its campaign and many other organisations were working to ensure the Ottawa Treaty achieved full ratification by UN member states. For its efforts to enact the Ottawa Treaty, the International Campaign to Ban Land Mines was awarded the Nobel Peace Prize in 1997.

The treaty itself came into effect in 1999. However, despite the efforts of Handicap International and others, not all states signed up to the Ottawa Treaty. To date, there are 162 nations who have signed on, but some of the 34 who haven’t signed are notable by their absence: the United States, Russia and China.

Despite some success, the elimination of land mines has proven difficult. In 2015, there were 6,461 people wounded or killed by landmines around the world. This was higher than 2014 by 75%. According to the International Campaign to Ban Land Mines, funding for the removal of land mines has been declining year on year. It is clear there is much work still to be done.

Place des Nations, standing at the entrance to the United Nations, is a hotspot for the kind of peaceful civil protest that allowed the Broken Chair to be erected. Today, opinions are seen and heard frequently in the shadow of the Broken Chair. There are often protesters and activists from around the world making the case for their cause through songs or silence. The Broken Chair is a symbol that this sort of activism can have some lasting effect but that it takes a great deal of concerted and unwavering effort to see it through.