A Brief History of Cheese Fondue 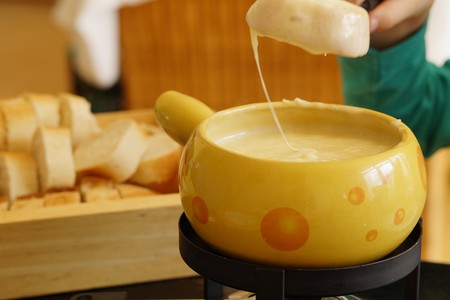 It is a truth universally acknowledged that the only thing better than cheese is melted cheese. A Swiss staple, the cheese fondue is a classic dish made up of dipping various delicious things into a bowl of gooey, melted cheese. We take a look at how this wonderful practice got started.

The first recipe for cheese fondue dates to 1699, when it was referred to as ‘Käss mit Wein zu kochen’, which translated to ‘to cook cheese with wine’. Some say that the practice began with Alpine farmers in Switzerland who would cook up wine, garlic and herbs with cheese as a way to use up their leftovers during when fresh food was unavailable during winter.Farming families would gather up hardened cheese, plop it in a pot, called a caquelon, that had been rubbed down with garlic and then splash in some wine and melt it over a fire. While its roots may have been in the mountains, the practice migrated down the slopes and it was also eaten by those in the towns, where Gruyère cheese was a favourite ingredient.

Cheese fondue as we know it didn’t always look the same either. One variation from 1735 was a blend of eggs and cheese. Unfortunately, it wasn’t universally popular; Jean Anthelme Brillat-Savarin, the renowned French politician and gastronome, disparagingly described it as ‘nothing other than scrambled eggs with cheese.’ It was around 1875 that the modern recipe that we are familiar with was first written down in the French Rhône-Alpes, near the Swiss border. This take on cheese fondue had the usual cheese, wine and herbs, but, Billat-Savarin would have been happy to hear, no eggs. 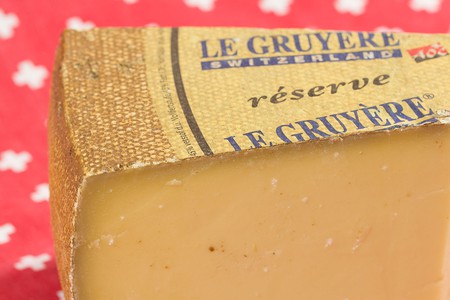 While the exact roots of modern cheese fondue are a bit hazy, blurred somewhere along the French-Swiss border, and between Alpine farmers and the wealthy classes, the association with Switzerland was cemented by the Schweizer Käseunion, or the more palatable Swiss Cheese Union, in the 1930s. As an attempt to bolster cheese consumption, and as a way to bind the Swiss together, the Union trumpeted cheese fondue, and the lesser known, but just as cheesy, raclette, as a national dish. ‘La fondue crée la bonne humeur’, or ‘fondue creates a good mood’, was just one slogan used in the Cheese Union’s overt and aggressive marketing campaign, which also saw fondue sets sent out to the military and to popular events, ensuring that Swiss cheese was being eaten. The Union, which has also been referred to as a ‘cheese mafia’, successfully ensured that cheese fondue entered into the Swiss way of life and never left.

The history of cheese fondue somewhat resembles the dish itself. While wading around the top layers, it’s a bit difficult to take at first and quite easy to lose your bread, but then the oh-so-convincing wine (in this case the Cheese Union) keeps flowing and that ‘good mood’ eventually arrives, making the cheese and bread keep going all by itself.

It’s also important to remember when you are digging into your meal that there is an unwritten rule of cheese fondue; whoever drops their bread in the pot, foots the bill.