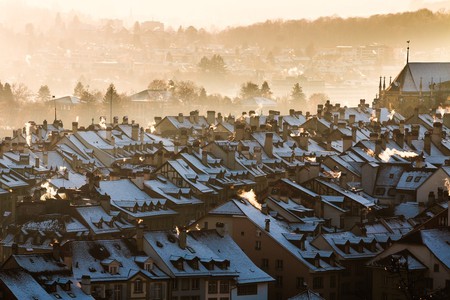 Bern, the capital of Switzerland, has the feel of a small town, rather than a city. This and its well-preserved medieval buildings make it an instantly endearing place to visit. Read on to discover more reasons why you should make it your next holiday destination.

Bern’s Old Town is where you’ll want to spend most of your time. It’s small and hemmed in on both sides by the Aare river, giving it a small town feel. The medieval buildings and arcades have been well-preserved over the years. Take yourself out on to the streets and explore the nooks and crannies, there’re plenty of hidden gems to discover here.

Bern’s symbol is the bear. You’ll see them everywhere on the Bernese flag and coat of arms, its statues, the frames of doors and on the odd lamppost. But you’ll only see live ones in the city’s bear park which has been home to a captive population for decades. 2017 was a momentous year for the canton as wild bears were spotted roaming the hills for the first time in 190 years.

Bern’s Rose Garden is the place to go for flower lovers. Within its vast expanse, you can admire over 200 different types of rose and as many irises. After wandering through the gardens, you can stop over at the Rosengarten restaurant to while away the time with beautiful views of the city’s Old Town in the background.

Bern is known as the city of fountains. Around its historic centre are dozens of them, some are beautiful while others are just down right bizarre (such as the child-eating ogre). Many date back over 500 years.

The Cathedral of St. Vincent’s Gothic tower dominates the city’s skyline and its main square. The best way to admire the intricate craftsmanship is from the Münsterplatz. Climbing to the top of the tower is also a must to take in the breathtaking views across the city’s rooftops and beyond into the Bernese Oberland.

The views from the Gurten

The Gurten is Bern’s local mountain and the easiest way to snap a few great photos of the city while enjoying some fresh air. You can reach the top by tram, the Gurtenbahn or by taking a leisurely walk.

Museum
Facebook
Email
Twitter
Pinterest
Copy link
Share
Map View
The Historical Museum of Bern is Switzerland’s second biggest history museum and holds one of the most important and fascinating collections that showcases the life of the Swiss from the Stone Age until the 20th century. One of the highlights here is Bern’s Silver Treasures, where the historic silverware of the city’s rich and famous is on display.
Open In Google Maps
5 Helvetiaplatz, Kirchenfeld-Schosshalde Bern, 3005, Switzerland
+41313507711
Visit Website
Give us feedback

Museum
Facebook
Email
Twitter
Pinterest
Copy link
Share
Map View
Among those many well-preserved buildings that line the streets of Bern is the former home of Albert Einstein. The interior has been carefully refurbished so that it’s a copy of the great physicist’s home. This is where Einstein developed his theory of relativity and it goes without saying that it is one of the highlights of any trip to Bern. The Einstein Museum is part of the Historical Museum of Bern.
Open In Google Maps
49 Kramgasse, Innere Stadt Bern, 3011, Switzerland
+41313120091
Visit Website
Give us feedback

It’s simply not possible to visit Bern without taking a trek to the Emmental Valley, the region that gave us the famous holey Swiss cheese. Highlights include learning how the cheese itself is made at the Emmental Show Dairy and Sumiswald’s traditional farmers market where you’ll feel you’ve stepped back in time. It’s easy to reach the region from Bern and can be visited as a day trip.

Beside the cathedral, Bern’s clock tower (the Zytlogge) is an iconic landmark of the city. It was constructed in the 13th century and passed many uses over the years as a guard tower, prison block and a clock tower. Originally it was the master clock of the city and dictated all the timepieces that were in use.

Switzerland's biggest street music festival is just around the corner! From August 10th – 12th around 150 artists from all over the world will turn the Old Town into a colorful festival. Tag someone you'd love to celebrate on the streets of Bern with! #ilovebern #BERN #buskers #festival #streetmusic #streetmusicfestival #streetmusicians #streetfestival #artists #UNESCOWorldHeritage #oldtown #oldcity #swisscapital #visitswitzerland #inlovewithswitzerland #switzerland #swiss #madeinbern #bernstagram #igersbern

A beautiful region not far from Bern, Oberaargau is home to the stunning Mutzbachfall falls and the Smaragd-Gebiet, or Emerald region, where you could spot a number of endangered species like beavers and bucks. Stop off in nearby Hutwil to learn “the way of the wool”, where 100 year old machines are still in use today along traditional methods.

The markets and festivals

Bern holds some pretty great markets and festivals all year long. Some of the highlights are the Museum Night when you can enjoy a night at the museum, the Bern International Jazz Festival, the Bern Busker’s Street Music Festival and the Onion Market where you can admire the tonnes of onions that local farmers bring to sell. Check out the Bern tourism website for more info.