The 10 Most Beautiful Towns in Sweden

From its dense forest and dramatic mountains to its beautiful coastlines and lakes, Sweden is undoubtedly one of the most beautiful countries in Europe. We round up 10 of the country’s prettiest towns, taking in the medieval walled town of Visby and charming Jokkmokk in Lapland, that everyone should visit.

A scenic seaside town founded in the 13th century, Marstrand in Sweden’s Västra Götaland County boasts beauty, history and culture. Spread across two islands in the northeastern Kattegat Sea, the town is the site of Carslten – the 17th-century stone fortress that towers over the town – and with its picturesque harbor and hosting of the annual Match Cup Sweden sailing race, Marstrand is often referred to as the sailing capital of Sweden. An idyllic destination in summer, Marstrand’s winding streets are lined with quaint cottages while venues such as the Strandverket Art Museum – which frequently exhibits contemporary Swedish art – are an added attraction for modern culture vultures. 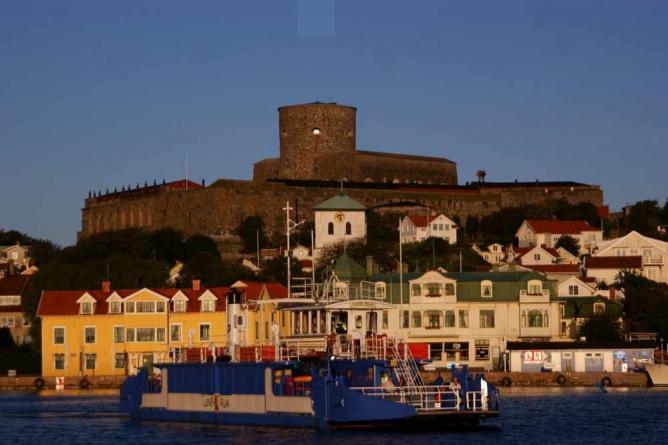 Although more recently known as the stamping ground of Swedish writer Henning Mankell’s fictional detective Kurt Wallander – as seen played on TV by both Krister Henriksson and Kenneth Branagh – the bustling ferry port of Ystad is a hub of history too with sights like the 12th-century Gråbrödraklostret monastery, one of the best preserved monasteries in Sweden, reminding of the town’s Middle Age origins. Located on the coast of Sweden’s southernmost tip, the picturesque town is typified by its cobbled streets, historic pastel-colored houses and gorgeous views out over the Baltic Sea, with its surrounding miles of coastline and rolling hills perfect for exploring on foot or bike.

Known as the gateway to Gotland, Visby is the island province’s only town and boasts a history as rich as the town is beautiful. The picture-perfect medieval town is home to one of the finest town walls still standing today and in 1995, was declared a UNESCO World Heritage Site with Visby’s medieval past commemorated with the annual Medeltidveckan festival – a week of medieval markets, jousting and dress-up taking place each August. Beyond its colorful medieval history, the town is also home to the beautiful Visby Botanical Garden, a stellar community of restaurants and cafes and the Gotland Art Museum.

Visby from the sea © www.gotland.com

Situated some 40 miles north of Stockholm, Sigtuna – the oldest town in the country – was founded in the late 10th century and lies on the shores of the lovely Lake Mälaren. History buffs marvel at the town’s many rune stones – the largest collection in all of Sweden – and sites like the 13th-century ruins of St. Lars Church that point to Sigtuna’s history as the first Christian town in the country. Sigtuna’s beautiful town center still echoes its past with narrow medieval streets populated by charming 18th- and 19th-century wooden houses while the beautiful backdrop of Lake Mälaren makes for a perfect boat excursion.

Nestled on the edges of Sweden’s beautiful Lake Siljan, Rättvik is a charming little town with a historic reputation as one of the country’s top tourist destinations – in fact, it was in Rättvik that Sweden’s first tourist-oriented hotel was built in 1894. Boasting a proud folk music tradition, Rättvik is home to Folkmusikens Hus – an organization dedicated to the preservation of Swedish folk – and the location of the Musik vid Siljan festival. A stroll along Långbryggan pier – which at 625 meters is Sweden’s longest wooden pier – reveals beautiful lake scenery while quirky events like Classic Car Week attract many visitors to the town.

Located in Lapland – Sweden’s northernmost province and home to Scandinavia’s only indigenous people, the Sámi – Jokkmokk is a small town that, due to its location just north of the Arctic Circle, is a popular destination for viewing the Northern lights. Surrounded by lakes and forest and close to several national parks, including the breath-taking Sarek National Park, Jokkmokk is an ideal starting point for exploring the wilds of northern Sweden. Each February for the past 400 years, the picturesque town has been the site of the Jokkmokk market, a Sámi tradition featuring traditional food, handicrafts and reindeer racing that attracts thousands of visitors each year.

Sweden’s northernmost town Kiruna is located in the heart of Swedish Lapland and is a town whose surrounding beautiful lakes and breathtaking mountains have made it a haven for nature lovers and skiers. With its chocolate-box cottages and surrounding forests, the town is full of alpine charm and home to Kiruna Kyrka – a church built in the early 20th century that in 2001 was voted the most beautiful building in Sweden. Sadly, Kiruna as we know it is to be no more: the town’s iron ore mine, which creates much employment, is expanding and forcing the town to move eastward in dramatic plans to be executed gradually by 2033 – all the more reason to visit Kiruna soon.

Technically a city, but with its relatively small population, natural beauty and small town vibe Växjö is a worthy addition. Surrounded by several scenic lakes and waterways, Växjö is naturally a haven for anglers and canoeists and the town’s many parks – which include Linnéträdgården designed by noted Swedish landscape artist Ulf Nordfjell and the beautiful lakeside Växjö stadspark, home to German artist collective Inge Idee’s sculpture Spegelbollen – have led to its title as ‘Europe’s greenest city’ while its bustling town center caters to cosmopolitan tastes with hip boutiques, award-winning restaurants and attractions like the 12th-century Växjö Cathedral and the Swedish Glass Museum.

Located an hour or so north of Malmö, the small seaside town of Båstad is nestled in a picturesque bay on Sweden’s Kattegat coastline and known as the home of the Sweden Open tennis tournament held each year since 1948, which sees thousands flock to the town. Despite its small size, the community is home to a number of cultural events including the Båstad Chamber Music Festival and The Little Film Festival, founded by Swedish late Swedish film director Bo Widerberg, while additional charm comes in the form of sights like the beautiful romanesque-style Båstad Church built in the 15th century.

Båstad by the sea © Guillaume Baviere/Flickr

A tiny mountain town located a few kilometers from the Norwegian border, Åre is nestled in the mountain valley leading down to the shores of the beautiful Åresjön lake that due to its enviable location is a popular skiing destination and was voted one of the best ski resorts in the world by Condé Nast Traveler in 2008. A mix of past and present, the town is home to several historic structures like the Åre Old Church, a beautiful stone building constructed in the 12th century, and more modern additions like Copperhill Mountain Lodge – a design hotel created by acclaimed American architect Peter Bohlin.