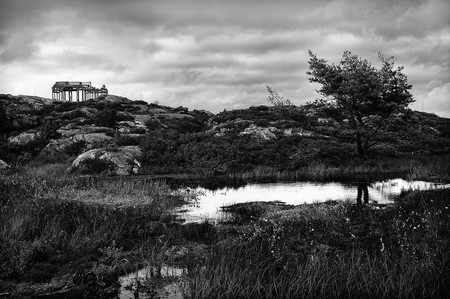 World-famous conductor Daniel Daréus suffers a heart attack after an intense performance in Milan. It compels him to retire to Norrland, where he was bullied as a child. He soon become the cantor of the local choir and falls for the radiant Lena. His cosmopolitanism irks the the local patriarch, a gun-friendly parish minister. As It Is Heaven explores the power of music in the context of domestic violence, religious conservatism, and love.

Director Roy Andersson’s long-awaited follow-up to his 2000 breakthrough Songs From the Second Floor (2000) is an absurdist comedy about the alienating nature of modern life. The title, lifted from Goethe’s Roman Elegies (1790), affirms the remarkable status of being alive, an idea reinforced by the actors’ direct addressing of the camera. The movie’s fifty scenes are short sketches in which random individuals muddle through life.

Tomas Alfredson’s Let the Right One In, based on John Ajvide Linqvist’s novel, was the first serious Swedish vampire film. Set in snow-caked Blackeberg, a suburb of Stockholm, it depicts the friendship of lonely Oskar and fellow 12-year-old Eli, a vampire girl gifted at exacting revenge on bullies. The film’s frosty visuals enhance its central theme: the angst and isolation of adolescence.

Director Jan Troell chronicles the lives of Sweden’s working-class people in films like the Oscar-nominated The Emigrants (1971). His Everlasting Moments, set in Malmö in the early 20th century, tells the true story of Maria Larsson, a Finnish woman who won a camera at an auction and became a serious photographer. The Maria in this moving film nearly sells her camera to raise money to buy food for her hungry kids, but she is convinced to keep it by a fellow expat who runs a photography store. The camera plays a pivotal role in a life blighted by domestic violence.

Stieg Larsson’s posthumously published Millennium trilogy became a huge best-seller. After the producer Søren Stærmose acquired the film rights, considerable pressure was exerted on him to re-create precisely the brooding Stockholm of the novels. Niels Arden Oplev set the tone with his creepy, violent direction of The Girl With the Dragon Tattoo before he handed the reins to Daniel Alfredson for 2009’s second and third installments. In all three films, Noomi Rapace excels as the Goth hacker Lisbeth Salander, who is partnered with journalist Mikael Blomkvist (Michael Nyqvist) in an extended campaign to fight the corrupt practices and sexual violence perpetrated by evil authority figures.

Göran Hugo Olsson’s documentary provides a Swedish perspective on the growth of America’s Black Power Movement between 1967 and 1975. Footage shot by Swedish journalists highlights such influential activists as Stokely Carmichael, Bobby Searle, and Angela Davis. The collage of images was dubbed with comments by contemporary black leaders. An early snippet shows a black waiter exalting America as the land of equal opportunity and free speech. As the film unfolds, however, it becomes clear that his faith is ill-placed. Black Power, the movie contends, manifested the African-American community’s need to stand up for itself in the face of oppression and racism.

Gabriela Pilcher’s directorial debut addresses the effects of rampant unemployment. Raša (Nermina Lukac), who lives in a sheltered southern village, is a young working-class Muslim who wants to play her part in redefining Sweden as a multicultural society. The loss of her factory job puts her in jeopardy since she has no qualifications and is obliged to look after her ailing father. Though the film’s title hints at a dry depiction of a thankless life, Pilcher endows the story with humor and grace. The evolving relationship between Raša and her father is especially touching.

Director Malik Bendjelloul, who committed suicide in 2014, left behind the powerful documentary Searching for Sugar Man, which won an Oscar and a BAFTA. Its subject is the Detroit singer-songwriter and activist Rodriguez, whose protest songs earned him a reputation as the new Bob Dylan – mostly in South Africa, where his 1970 and 1971 studio albums were embraced by the Anti-Apartheid movement. Bendjelloul’s film is a study of a man who had not the remotest interest in fame and whose reclusiveness made him the subject of urban myths.

In 1982 Stockholm, three teenage girls – the shy protagonist, her boisterous best friend, and a demure musically-inclined schoolmate – form a punk band, despite having no instruments. It scarcely matters that the punk movement had peaked, because We Are the Best! is a contagious celebration of the exuberance and naivety of youth. Director Lukas Moodyson’s unadorned little film was adapted from a semi-autobiographical graphic novel that his wife Coco based on her experiences growing up in the 1980s.

Ruben Östlund’s fourth feature is a comedy drama about a photogenic and seemingly generic family vacationing at a beautiful ski resort in the French Alps. Something occurs, however, that shreds this semblance of perfection. The unconventional Force Majeure is a shrewd study of subtle family dynamics that also puts masculinity under the microscope.