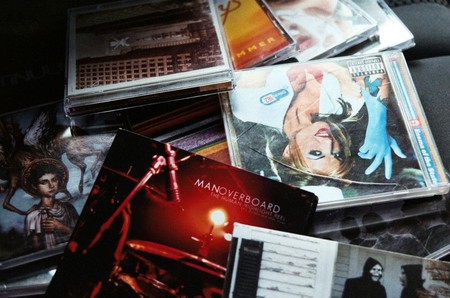 When it comes to personalized playlists, Spotify is the undisputed king, but with its latest rollout, titled “Your Time Capsule”, has the streaming service gone too far?

Tapping its current “now playing” design, Spotify does its best to guess what users were listening to during their teenage years — available for Spotify users over the age of 16 in most countries — with each Time Capsule feature, dishing out 55 tracks of nostalgia in each.

“We made you a personalized playlist with songs to take you back in time to your teenage years,” the ‘Your Time Capsule’ description reads. “Bring on the memories with 2 hours of iconic throwback tracks — all picked just for you.”

Launching my own playlist, its contents are impressively accurate. The largest chunk is dedicated to post-hardcore artists, like The Receiving End of Sirens, Thrice, and The Blood Brothers. From there, the rest is primarily composed of alt-rock/pop punk (Jimmy Eat World, The Killers, Taking Back Sunday), late ’90s/early aughts hip hop and R&B (50 Cent, 2Pac, Ja Rule), and cuts from the first three Linkin Park albums. 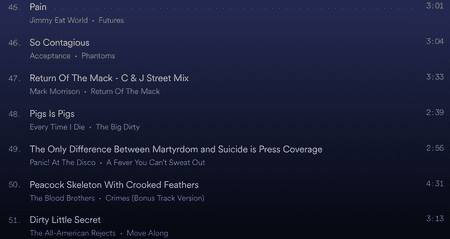 A few outliers like Aphex Twin and Mark Morrison are included but really didn’t enter heavy rotation until my early adult years. However, the most embarrassing tracks listed are probably Panic! At The Disco’s “The Only Difference Between Martyrdom And Suicide Is Press Coverage” and The All-American Reject’s “Dirty Little Secret,” and I definitely had far more questionable guilty pleasures during my angstier days.

Instructing a friend to boot up his own Time Capsule, it was no surprise that it was significantly comprised of ’90s/2000s hip hop, with a few dashes of reggae/dancehall and highlights from his “skater boy era” (Sum 41, Blink-182). We quickly noticed the anomaly that was Rupert Holmes’ “Escape (The Pina Colada Song),” and he felt #noshame at the appearance of Chris Brown’s “Yo (Excuse Me Miss).” Yet, he was keen to assure me that he had definitely never listened to Good Charlotte, as if he didn’t blast “Lifestyles of the Rich & Famous” in his bedroom every day after school, alone. 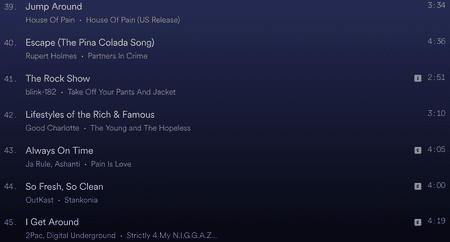 If you’re in the mood for some lost treasures, and a few cringes, give Your Time Capsule a go here.