Partying With Crayfish in Sweden

When August rolls around, Swedes start returning from their summer country cottages (stugas) or holidays abroad. While they might be heading back to work, they’re still looking for ways to party and have fun before the dark months creep in. That means it’s time for crayfish parties. Here’s how to properly host or attend a traditional crayfish party, along with some history.

Once eaten almost exclusively by the aristocracy and upper classes, crayfish has been enjoyed in Sweden since the 1500s. The so-called ‘common people’ were suspicious of shellfish back in the day, and crayfish meat was generally only used for sausages, patties or other dishes where they were part of a mix. It wasn’t until the 1800s that the middle classes began slurping crayfish as they do today, and by the 1900s crayfish was a national delicacy enjoyed by all of society, with parties and celebrations every August. 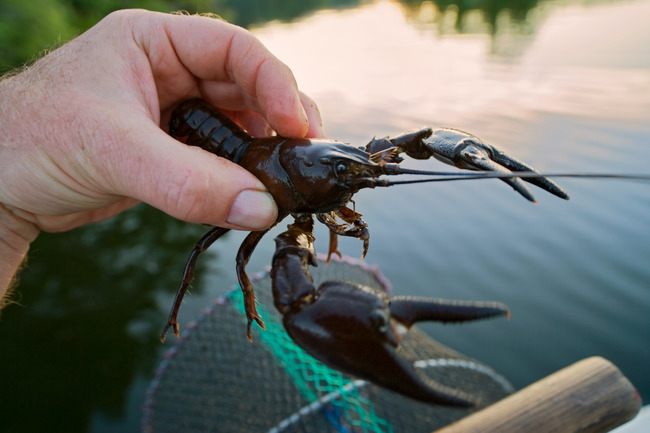 People used to catch their own crayfish but over-fishing led to restrictions, and now most people buy their crayfish in the grocery store or from their local fishmonger or market, with much of the catch imported from overseas. This means that if you do get your hands on Swedish crayfish, which allegedly has a superior flavor, you’ll be a hero. You’ll probably lighten your wallet as well, as genuine Swedish crayfish is far pricier than its foreign counterparts. 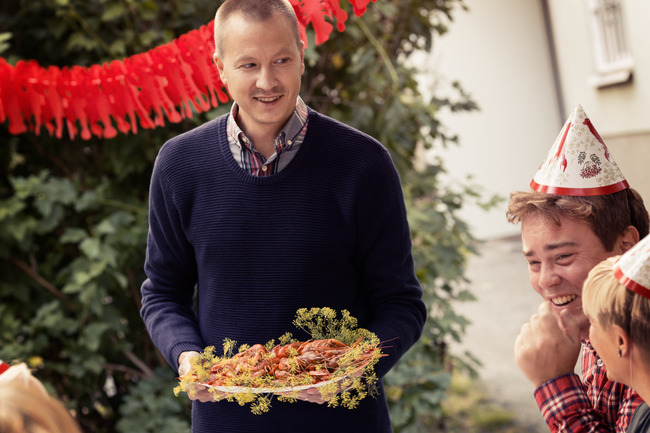 Gather your friends for the fun | © Carolina Romare/imagebank.sweden.se

Once you’ve got your crayfish, it’s time to have, or find, a party. The first thing you need to do is set the stage: the party must be held outdoors, and the space—whether it’s your back garden, a park, or your city balcony—should have brightly colored paper lanterns with smiling full moons hung up around the table, as well as equally colorful plates and napkins. Just make sure there are plenty of napkins; crayfish-eating is a messy sport. Everything should be made of paper, other than the balloons that some non-purists have introduced to the décor. 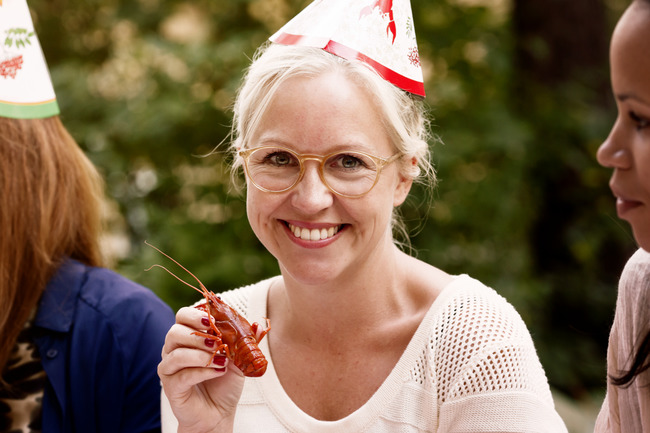 Make sure you wear a comical and colorful party hat | © Carolina Romare/imagebank.sweden.se

Once the decorations are in place, it’s time to hand out bibs and hats. These are just as bright and colourful as the decorations and, while the bibs are a bit like a lobster bib, the hats are—let’s be honest—comical and meant to evoke laughter, keeping the mood light.

Now the feast can begin. Bread and strong cheeses, such as the delicious Västerbotten cheese, are always put out as accompaniments. The crayfish is eaten cold and with your fingers. Dozens of crayfish are piled onto huge platters, usually with sprigs of dill, and once people start digging in things get really interesting. All you’ll hear is people slurping and sucking, as they try to extract not just the meat but the highly prized juices hidden within the tiny crustaceans. 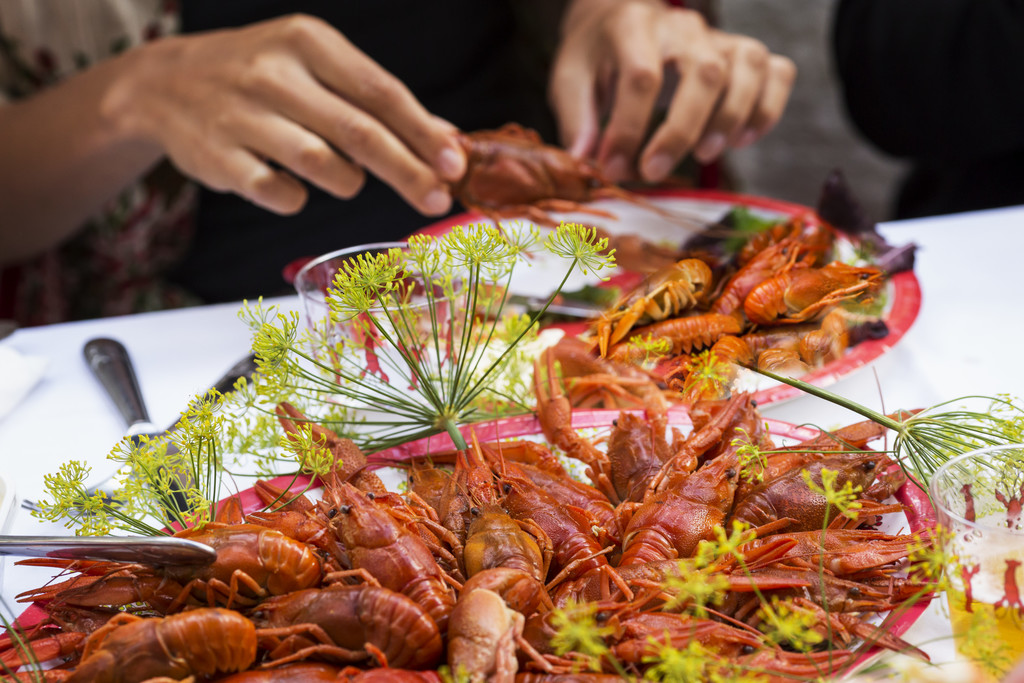 The juice inside the crayfish is as delicious as the meat | © Carolina Romare/imagebank.sweden.se

Beer and shots of snaps (strong Swedish liquor) are drunk with the feast and, as more and more is consumed, Swedes will most likely break out into song—usually old Swedish songs that all of Sweden seems to know. They’ll shout, sing and sway to the song until eventually someone throws an empty crayfish shell, either at another person or just randomly into the air. Take part in the singing even if you don’t know the words, just pretend that you do. The other guests will not only find this highly amusing, they’ll give you points for being a good sport. 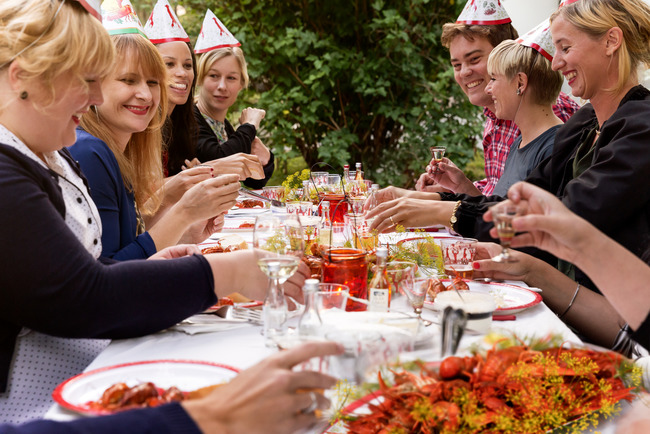 Also, when people start to make toasts (after a few drinks they’ll definitely start to make toasts) remember to hold up your glass while they speak and gaze steadily into everyone’s eyes. When the toast (finally) comes to an end, nod your head at every person at the table while looking directly at them. Then it’s bottoms up! 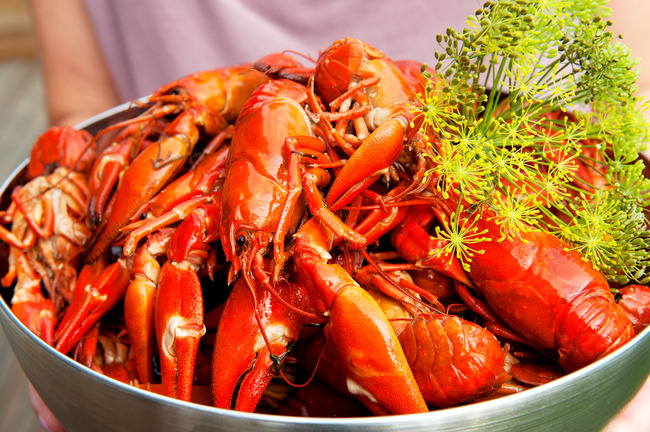 The party goes on into night, and, if you’ve been the host, you’ll most likely wake up to a pile of stray shells, a reminder of the fun you had the night before.