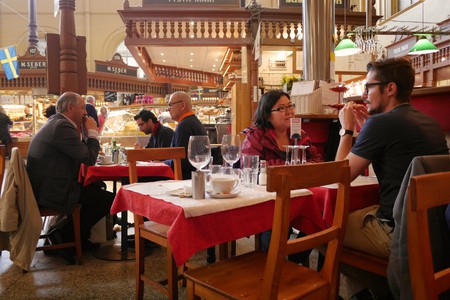 Lunch in Stockholm can consist of anything from a kebab grabbed from a street vendor to a sit-down meal with full table service and wine. Normally, though, it’s something in between. While workers might desk-dine at least part of the week, they’ll head out to eat at least one or two days. Come the weekend, the city’s restaurants are packed. Here’s your guide on how to eat lunch in Stockholm.

Most restaurants in Stockholm offer a daily lunch special, called dagens rätt, which essentially is a daily special offered at a reasonable price, often under SEK100 (£9). It includes salad, bread, a non-alcoholic drink, and coffee or tea. Usually there are several options to choose from, and more and more restaurants are including a vegetarian choice as well. Husmanskost is the old name given to the hearty midday meal that workers ate and it’s still served in many of the more traditional restaurants, such as Tennstopet. Here, you’ll get a solid meal of meat, veg, and bread, which will carry you right through to a late dinner. One thing to remember is that while people may have a low-alcohol beer (lätt öl) at lunch or even a glass of wine, they will never get drunk during the day.

Eat where you’re at

Swedes don’t travel for lunch. They eat at whatever is local and tend to return to the same places again and again, so when the hunger hits, make like a Stockholmer and pop into the nearest place.

Restaurants in some neighbourhoods offer a more expensive dagens rätt than others, but some great options are Non Solo Bar on Odengatan in Vasastan, which has an excellent selection of salads, sandwiches, pies, and pasta dishes – and some of the best coffee in town.

If you’re wandering around Södermalm, head to Hornstull, where there is a large grouping of restaurants just at the subway station, including Klang Market. At this place, sandwiches (which Swedes love to have for lunch) start at about SEK60 (approximately £5). Or check out Hornhuset, which includes one of Stockholm’s best Peruvian restaurants, Barranco. This spot has a great outdoor seating area in the summer.

Gamla Stan is, of course, crawling with restaurants and while Stockholmers tend to give this neighbourhood a miss during the day, you can still eat like you’re a local. Vapiano, the German-owned Italian restaurant chain, is a city favourite. Pizza, pasta, and salads are the name of the game here, with great prices, an excellent location, and a lively vibe. There are a number of outlets around the city and all are busy all of the time, but Gamla Stan is particularly popular. This is where Swedes do what they do best: queue for lunch. It’s a bit like a fast food place, except you choose the ingredients with the chef, who then makes the food right in front of you.

It’s important to remember that Swedes eat lunch early. Really early. By 11am many restaurants are already filling up, so one way to avoid the lunch rush is to eat after 1pm. Some restaurants, such as Taverna Brillo on Östermalm, will always be busy and thus need a booking, but in general the later you eat, the less likely you are to wait for a table.

Of course, there are other options, such as tiny take-out sushi places. Stockholm has experienced an explosion in great sushi joints and they are incredibly popular. The best ones are the ones you don’t notice as you pass, such as Akki Sushi, which has arguably the best sushi in town. There are two little hole-in-the-wall outlets on Södermalm, one at Medborgarplatsen and one at Hornstull.

Food trucks have also gained a foothold among Stockholmers, although they weren’t immediately embraced when they first arrived a few years ago. These days, though, food trucks roam the city and often park at the same spots each day. The food truck collective hits Twitter each day to announce where members will be parked. There’s also a website that updates that gives regular information. The trucks serve up everything from burgers to Indian to Caribbean, and prices are generally around SEK85 (approximately £8).

So to wrap it all up: when lunching in Stockholm prepare to pay roughly SEK100 (£9) for a meal. Look for signs that say dagens rätt, which will give you the best deal. Eat late or you’ll be crushed in the lunch rush, and always remember that food trucks are an option. And sushi? Stockholmers love their fish so the sushi in this city is fresh and, some say, the best outside of Asia.