Grab a Bite of the New Vegan Ice Cream in Sweden 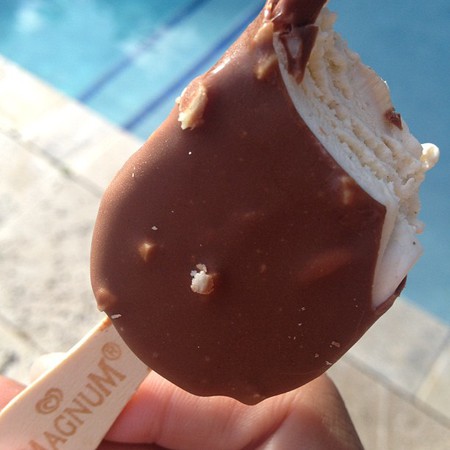 Get a bite of the new vegan ice cream! | © Ines Hegedus-Garcia / Flickr

If you are a vegan ice cream lover looking for new flavours to indulge in, then you are in for a treat. Popular ice cream brand Magnum will be bringing vegan ice cream to Sweden this month and we can’t wait to hear more about the flavours they will be offering us. Here’s what you need to know.

This September, Magnum, the uber-popular Belgium-based ice cream company, will be releasing two of their famous flavours for vegans: Magnum Vegan Classic and Magnum Vegan Almond. Both of these new flavours have been approved by the European Vegetarian Union and Rainforest Alliance Certified and will be sold as their classic ice cream bar.

What makes them vegan? These particular ice creams will be made with a pea protein base and coated in dark chocolate. You can find the ice creams being sold as singles and in packs of four in Coop, ICA, Hemköp and the like.

Both of these new flavours will be exclusively sold in Sweden and Finland, so unfortunately if you don’t live in either of these two countries or aren’t planning on visiting soon, you’re out of luck. However, if you are in Italy or the UK, you still have a chance at getting your hands on vegan ice cream. Last year, Cornetto released ‘Cornetto Veggy’ in Italy and then brought it to the UK earlier this year with great success.

Get a bite of the new vegan ice cream! | © Ines Hegedus-Garcia / Flickr

Switching to a plant-based diet is becoming increasingly popular in Sweden and in surrounding countries. Malmö is consistently ranked as Sweden’s most vegan-friendly city with a plethora of vegan restaurants to choose from at over 160! Supermarkets in Sweden are continuing to carry meat and dairy-free items, especially with the rise of the meatless brand Quorn. Last year, McDonald’s began offering the McVegan, which was exclusively available in Sweden and Finland. As the times change, more companies and businesses are adapting to newer trends as more individuals are switching to plant-based diets.