The Most Charming Fishing Villages in Spain 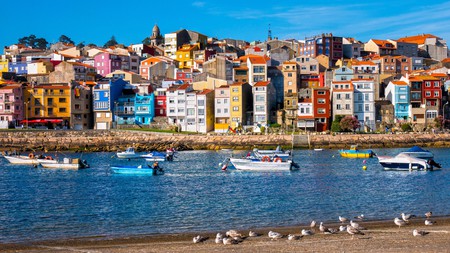 Big cities such as Barcelona and Madrid are Spain’s greatest tourist magnets, but it’s worth venturing a bit further out to discover the country’s small villages. Most of them used to thrive from their fishing industries and some continue to do so. Between endearing ports, delectable seafood and quiet beaches, each of these fishing villages is an attractive destination in its own right. 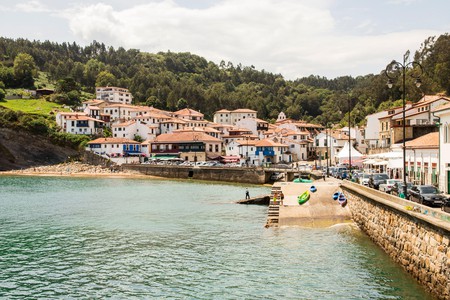 This former whaling village was first put on the map back in 1517, when the ship of Charles V, Holy Roman Emperor, was thrown off course, landing in the small harbour of Tazones. It was the first Spanish town the future King of Spain encountered and it must have been a pretty sight. The harbour that once hosted whaling ships still stands unaffected by time, dotted with cute houses and a number of fishing boats. The old quarter of San Miguel with the colourful fishermen’s cottages has been declared a site of historic and artistic interest by the Principality of Asturias – this is also where you’ll find a house covered entirely in shells. 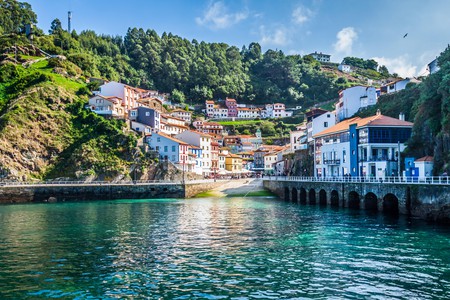 Pastel-hued clifftop houses surround the Plaza de la Marina which seamlessly blends into a tiny port; it is all part of the fairytale charm of Cudillero. This small fishing village (with a population of 5,000) will invite you to take relaxing strolls on its serene, almost private beaches or enjoy a cup of coffee at a harbourside cafe. When you’re done swimming in the cool waters of the Cantabrian sea, marvel at the minimalist, 13th-century Humilladero Chapel, the oldest building in town, or tuck into a seafood delight at El Remo, a traditional seafood joint close to Plaza de la Marina. 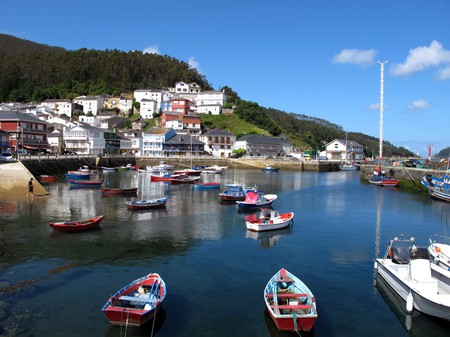 Another picture-postcard harbour steals the spotlight here, begging to be captured on camera. Spread around a small estuary of the river Sor, this compact village in the province of A Coruña in Galicia will astonish you with its dreamy, bright-coloured houses that hug the circular port, as well as the abundant nature that unfolds around them. Meaning “the boatman” in Galician, O Barqueiro took its name from the very need to cross the river by boat. The river itself is home to salmon, as well as migratory sea birds that flock to the area in their various movements. 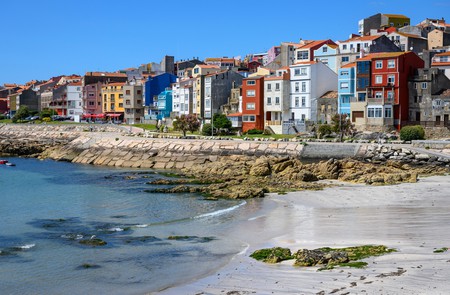 Overlooking the Atlantic Ocean next to the mouth of the Miño River, A Guarda is another Galician wonder, sitting in the Pontevedra province, on the border with Portugal. Having been conquered by Norman, Saracen, Portuguese and French pirates throughout the centuries, the village has a rich history and a number of museums that document it. Next to beautiful churches such as that of Santa María de la Asunción, you will find peculiar rectangular houses in different colours, as well as the imposing fort of Castro de Santa Trega. Fishing is still very much alive here, so expect to taste some delicious seafood. 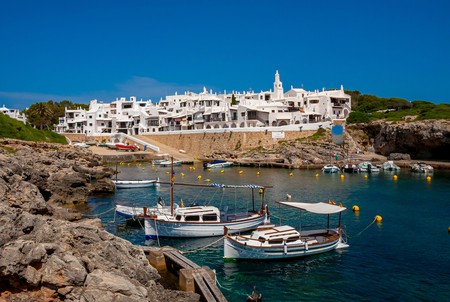 Where other fishing villages in Spain burst with colours, the enchanting Binibeca Vell is so white, it could easily outmatch the ‘whiteness’ of Santorini. Built on the island of Menorca between the late 1960s and early 1970s so as to recreate a traditional Menorcan fishing harbour, the town is made of narrow winding alleys and whitewashed houses that echo a typical Mediterranean coastal village. Among the highlights are the main square and the lovely promenade that leads to the pier. Make sure to visit the white-sand Binibeca beach which is ideal for snorkelling and comes fully equipped with a beach bar, lifeguard and sunbeds. 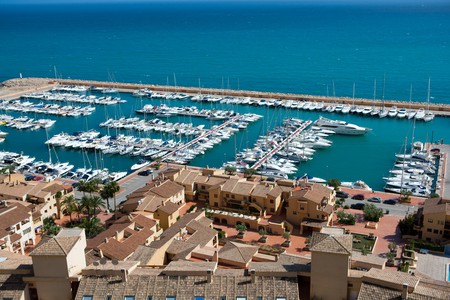 This attractive village in the province of Alicante was developed around a small fort built in 1742 to protect the area from Berber attacks. The shape of the fort is known as pezuña de buey or “ox’s hoof”, reflecting its curious shape. A mix of families, sport enthusiasts and celebrities flock to Moraira especially during the summer, to taste its fine fish, coming straight from the port and the Moraira fish market. The area’s many restaurants also serve different varieties of rice dishes, such as paella or arroz a banda (rice with fish), which are best enjoyed with a glass of sweet Mistela wine, produced locally. 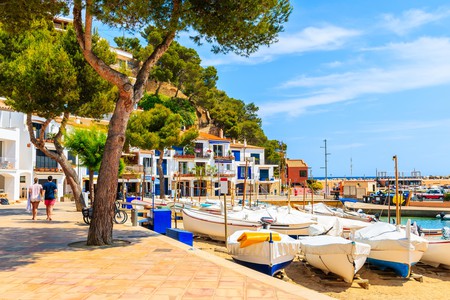 Frequented by film stars, writers and, once upon a time, Salvador Dalí, this relaxed village in the province of Girona is one of the most precious gems along the Costa Brava. Next to pristine beaches and parks, Llafranc boasts quaint fishermen’s houses converted into villas and a gorgeous marina taken straight out of a tourism board’s Instagram account. The village’s cosmopolitan allure can be partly attributed to Manuel Bisbe – known as the “gypsy of the Costa Brava” – and his brothers, who opened the legendary Hotel Llafranch back in 1958; this was a magnet for Hollywood actors and flamenco stars. 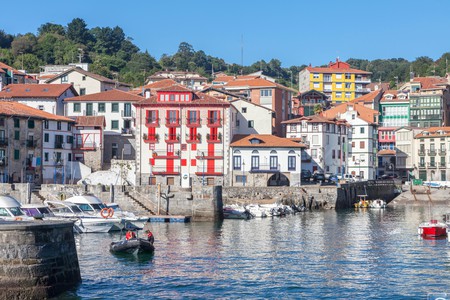 Famous for its waves, Mundaka is Spain’s surfing paradise. The village sits at the estuary of a river in the province of Biscay, within the Basque Country’s Urdaibai Biosphere Reserve. This Unesco-listed wetland has gifted Mundaka with golden-sand beaches, hiking trails and fascinating birdlife, including spoonbills and fish eagles. The main attraction is the port, though. Sprinkled with multi-coloured medieval houses and small fishing boats, it turns the village into a real-life painting. Don’t miss the Hermitage of Santa Catalina, formerly a meeting place for fishermen and a place of quarantine for people with epidemic diseases. 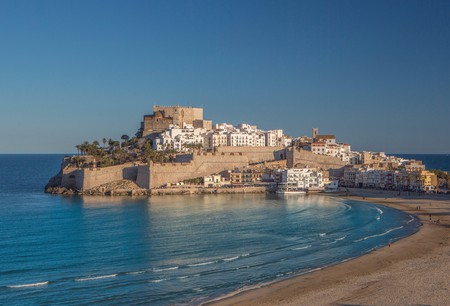 Often dubbed the “Gibraltar of Valencia” or “the city in the sea”, Peñíscola is almost an island, as the meaning of its name suggests. The town’s highlight is its fortified port, with a castle perched high on a rock, which has taken its name – Papa Luna – from the schismatic Avignon Pope Benedict XIII (or Pedro de Luna) who lived there in the early 15th century. Sitting between Barcelona and Valencia in the province of Castellón, Peñíscola has a long, sandy shoreline extending across four miles. Enjoy the village’s famous craft beer by the sea and stop by its picturesque lighthouse dating to 1892. 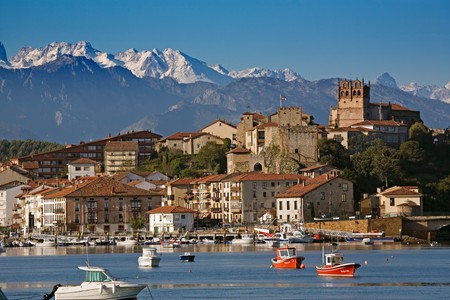 Framed by the snow-capped mountains of Picos de Europa, this old fishermen’s refuge serves as the ultimate unspoiled retreat. Its conservation practices and the fact that it’s part of the Oyambre Natural Park have given San Vincente de la Barquera great ecological value. The village has an array of splendid beaches to choose from. At the elegant port, boats float serenely next to charming bridges with multiple arches that connect its two sides. The fishing tradition of the village is echoed in mouthwatering fish and seafood dishes, such as the sorropotún, a stew prepared with tuna and potatoes.