The Most Awe-Inspiring Places to Watch the Sunset in Mallorca, Spain 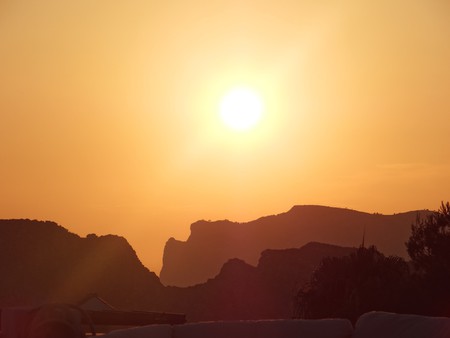 The dramatic coastline of Mallorca has many vantage points from which people used to look out for pirates. These lookout spots are now the perfect places to admire the sun setting over the Mediterranean. That, combined with the spectacular Tramuntana mountain range and countless picturesque bays, means that there are many jaw-dropping places to watch the sun go down. We’ve selected a few of the best.

A bit of a mission to get to, Mirador Ses Barques is a hilltop lookout point with stunning views down to the Port of Soller, and there’s also a Mallorquin restaurant there. The restaurant is large with seating on different levels; try to get a table on the edge of the deck that so that you have front row seats as the sun sets over the port. The food is decent, but really it’s all about the incredible setting; well worth the drive.

Sa Dragonera is a tiny uninhabited island and nature reserve just off Mallorca’s southwest coast, directly opposite the resort of Sant Elm. Named due to its dragon-like shape (and the lizards that inhabit it) the sight of the sun disappearing behind this jagged islet is quite something, making Sant Elm one of the best places in Mallorca to enjoy the sunset. 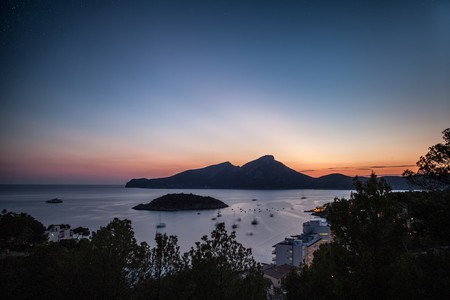 This bar is a great place to be, sitting under the pine trees on the waterfront, as the sun goes down. You can’t see the sun from here, but you can enjoy watching the sky turn from orange to pink, watch the boats bobbing in a sea shimmering with colourful reflections, and enjoy an expertly mixed gin and tonic. This tranquil bar looks out over the Bay of Pollensa and is part of the Illa D’Or Hotel, but is separate from the hotel’s other restaurants and is open to non-guests.

The views from the lighthouse at Cap de Formentor are incredible at any time of day, but watching the sunset from here will take your breath away. It feels as if you’re standing on the edge of the world, with the huge glowing sun dropping into the sea in front of you and the jagged cliffs of the coastline silhouetted against the sky. You need a car to get there; it’s around a half-hour drive from Puerto Pollensa, but you will probably want to stop at some other viewpoints along the way.

Nestled in the Tramuntana mountains, the pretty village of Galilea has stunning views over hills and forests all the way down to the sea in the far distance. The drive up to this village can be quite dicey, with hairpin bends galore, but if you get there just as the sun drops behind the horizon, the views are magical.

There are many incredible places to watch the sunset on Mallorca’s northwest coast, but the restaurant and bar at Mirador de na Foradada is one of the best. A popular spot for marriage proposals and weddings, the restaurant is in a prime sunset location on a small peninsula jutting out from the dramatic rocky coastline. The outdoor deck bar area is large, with chill-out music and comfortable seating: a fantastic place to enjoy a sundowner.