The Most Awe-Inspiring Places to Watch the Sunset in Ibiza 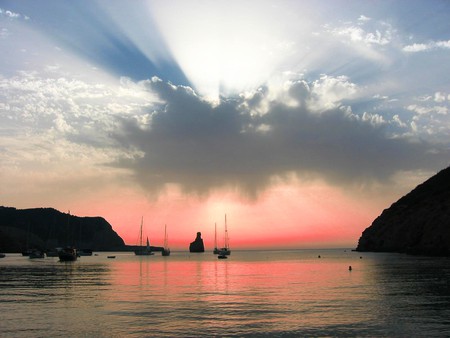 Ibiza sunsets are the stuff of legend, providing the perfect opportunity to kick back and watch the sky turn to fiery reds and pinks over the sea – before heading out to to party into the early hours. Whether you want to be at one with nature, sipping cocktails in a beach bar, or larging it up on the infamous Sunset Strip, we’ve picked out the best spots on the island to enjoy this daily awe-inspiring spectacle.

A particularly stunning spot to watch the sun go down is on the cliffs above Cala d’Hort, opposite Es Vedrà, which is a rocky and uninhabited island just off the southwest coast of Ibiza. A mythical place, folklore says not only that the island is the third most magnetic place on earth, but that it’s the birthplace of Phoenician goddess Tanit. Legend also has it as home to the sirens and sea nymphs who tried to lure Ulysses from his ship in Homer’s Odyssey. There is an ancient ruined tower on the cliffs , historically used to keep watch for pirates, and now a very picturesque place from which to watch the sunset. 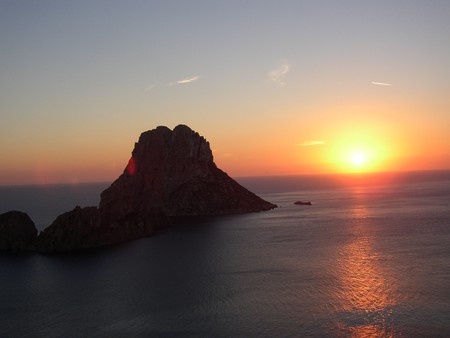 The legendary Sunset Strip in San Antonio is one of the most famous places in Ibiza to watch the sun dip under the horizon. This strip of bars has a clear view to the setting sun and is home to iconic bars like the Café del Mar and Café Mambo. There are numerous other bars with large terraces along the strip, though sunset is inevitably a popular time and some require reservations and have minimum spends; for others, you just need to turn up early and hope for the best. The cheaper option is to take your drink and sit on the rocks. Wherever you end up sitting, expect lots of people, a lively atmosphere, and spectacular views. 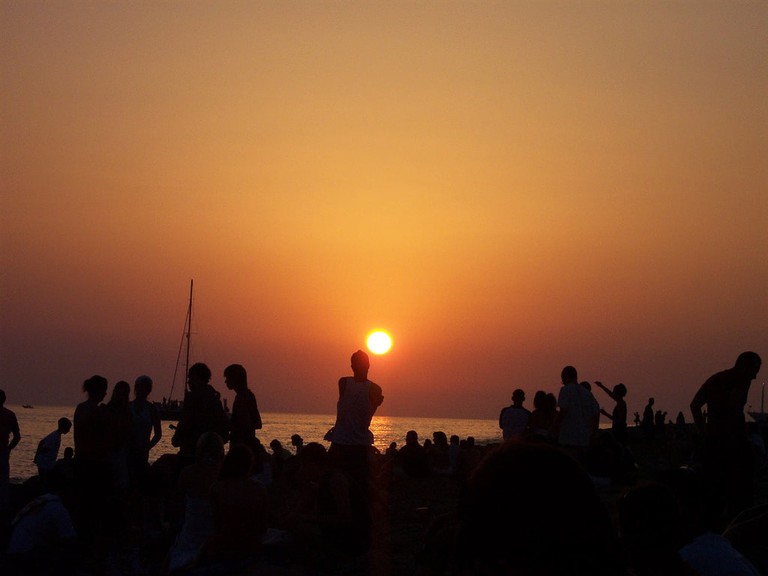 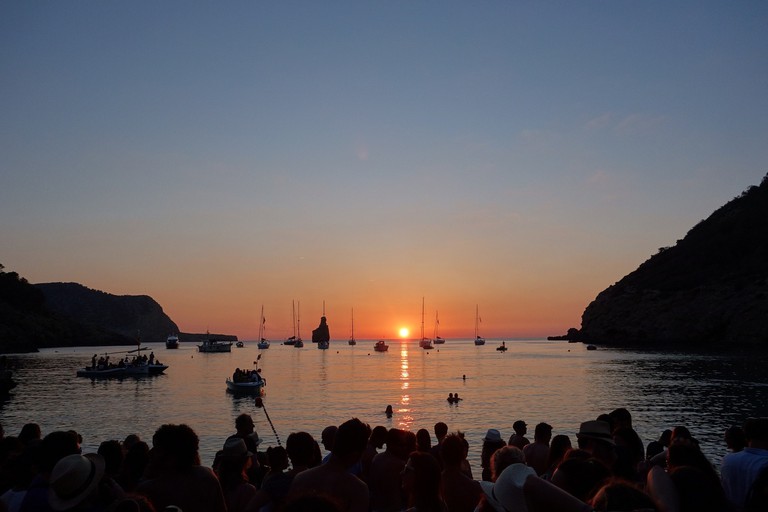 Benirrás Beach | ©Pixabay
This part-sand, part-shingle beach with incredibly clear waters is the placeto be at sundown on a Sunday. On August 18, 1991, a day now known on the island as the Day of the Drums,hundreds of people gathered on the beach at sunset in protest against the first Gulf War. The event was so popular that it became a huge annual gathering, with hippies and anti-war protesters travelling from all over the world to attend. Sadly the event got too big, and it was banned in 2002, but since then a group of hippy drummers get together every Sunday at Cala Benirrás to play their bongos as the sun sets behind the strange rock formation in the sea just off the beach. As a result, Sundays are very busy, so its best to get there early if you hope to find parking in time to witness this spectacular weekly ritual.
Open In Google Maps
Spain
Give us feedback

A renowned place to watch the sunset, Sunset Ashram is a bar and restaurant on the beautiful unspoilt beach at Cala Comte, and has a resident DJ playing music throughout the day and guest DJs playing sunset sessions. Relaxed and unpretentious, the bar is on the rocks that divide the beach, with seating under rustic beach umbrellas, and the restaurant serves very tasty Mediterranean, Indian and Japanese food. If you want to come and enjoy a cocktail and watch the sun go down, it’s best to call ahead and reserve a table as it gets very busy later in the day. 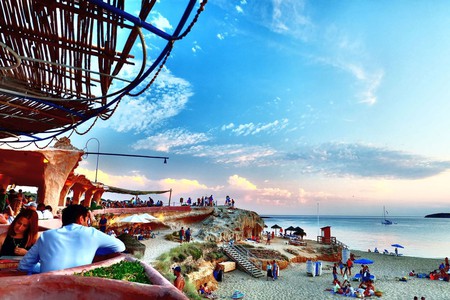 Whitewashed to Balearic perfection, Cotton Beach Club sits on top of the cliffs on the southwest coast, overlooking Cala Tarida in a prime position for watching the sun sink into the sea. FAY, the beach club’s Asian fusion restaurant, makes the perfect setting for a romantic dinner with sunset views – you can enjoy a fine dining experience on the rooftop or the sea-front terrace. The wine and cocktail list is extensive and the food (particularly the ceviche) is excellent.

One of Ibiza’s most famous beaches – Las Salinas – is a long stretch of sand, backed by the sand dunes, pine trees, and salt flats set on the southern tip of the island. Watching the sun go down over the still water and the salt flats is something not to be missed. Las Salinas is extremely popular and very busy in high season, and the beach has numerous beach bars, providing drinks, food, and music throughout the day and evening. Sa Trixna, at the far end, is a bit of an an institution on the island and has been around since the 1970s – the relaxed, hippy feel makes it an ideal venue to enjoy a sundowner. 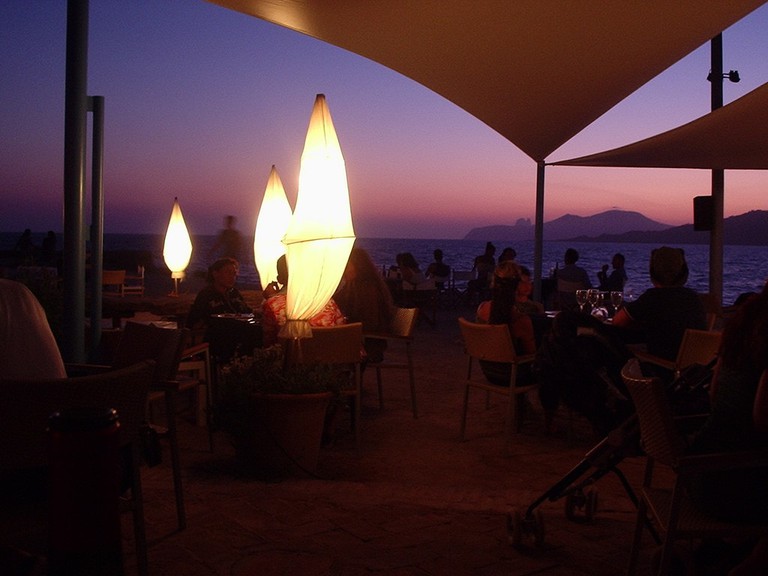 What better way to watch the sun dip in the sky and drop into the sea than on a boat – whether that be for romance or a full-on party cruise. There are various companies offering sunset excursions, usually running for three or four hours, with the majority departing from San Antonio. Sunset Boats offers a number of different packages from romantic sunset cruises for two, to stag or hen party boat trips for up to ten people. Prices are often steep but include drinks. Ibiza Day Sailing offers three different types of sunset cruise (Calssic, Mojito or Sail ‘n’ Bass) all of which include swimming, drinks and snacks, plus Bluetooth connection so you can play your own music on the boat. 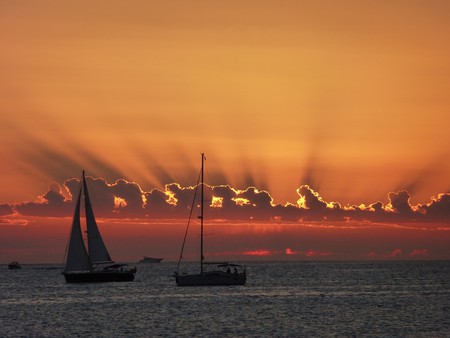