The Most Beautiful Churches In Madrid

Spain is and always has been a very Catholic country. Its churches are an essential part of its cultural heritage and an excellent way of getting to know Spanish art, architecture and history in more depth. The capital has many beautiful churches, so we have made a selection of the best ones to visit when in Madrid. 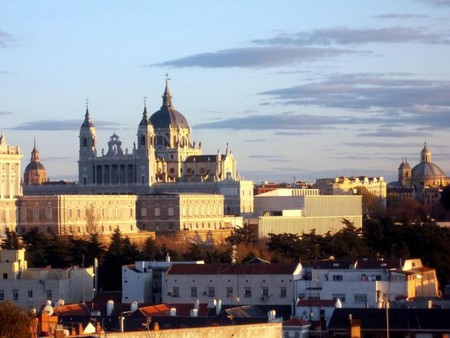 Madrid’s Cathedral is, of course, one of the most beautiful churches in the city. It is located right next to the Royal Palace, and was built during the 19th and 20th centuries. It is the only Spanish cathedral that has been consecrated by a Pope, it was blessed by John Paul II during his visit to Madrid in 1993. Since it was conceived as an integral part of the Royal Palace complex, the church’s cross is oriented towards the North and South and not the West and East, which is uncommon for a Christian church. It has a beautiful interior to match its stunning exterior, with plenty to admire in every corner.
La Almudena, Calle Bailén 10, Madrid, Spain

Also close to the Royal Palace, the Basilica de San Francisco el Grande is a beautiful church built in the neoclassic style during the 18th century. Its cupola is considered to have one of the biggest diameters of cupolas in Christian churches all over the world, making it stand out from most in Madrid. It is tastefully decorated inside, with beautiful murals and paintings on the ceilings and walls, some of which are reminiscent of the Renaissance.
Basilica de San Francisco el Grande, Plaza de San Francisco, Madrid, Spain

The Real Oratorio del Cabellero de Gracia is a surprising hidden treasure in the center of Madrid. The masses here are given by priests that belong to the Opus Dei stream of Catholicism, which is one of the most fervent strands of the religion. It is a spectacular building, and was founded by Jacobo de Grattis, later known as the Chevalier of Gracia. It is built in a neoclassical style, as its renovation took place during the end of the 18th century. There had previously been another Oratory here, but it was in a very bad state and was thus refurbished and became the beautiful temple it is today.
Real Oratorio del Caballero de Gracia, Calle del Caballero de Gracia 5, Madrid, Spain

Also known as the Church of the Sacrament and the Armed Forces’ Cathedral Church, this building is situated near the Calle Mayor in Madrid. It used to be the temple of an old convent complex, where the nuns would come to pray, but the rest of the buildings were demolished in the mid 20th century, leaving only this church as a reminder of what was once there. It is considered by many experts to be a magnificent example of Madrid’s religious baroque style, despite the many imperfections it has suffered through time.
Iglesia Arzobispal Castrense, Calle del Sacramento 11, Madrid, Spain

Commonly known as ‘Los Jeronimos’, this was once one of Madrid’s most important and relevant monasteries, but today it only assumes the function of a church. During the 19th and 20th centuries this building suffered greatly and was almost forgotten, but thankfully it was saved at the last moment. It was declared a National Monument in 1925, the period when the Museo del Prado added it to its patrimony as part of an expansion project, for which it was taken down stone by stone and then rebuilt exactly the same.
Iglesia de San Jerónimo el Real, Calle de Moreto 4, Madrid, Spain

This grand monument is located in front of the Retiro, Madrid’s biggest and most beautiful park. The Iglesia de San Manuel y San Benito, together with the stunning Pantéon de Hombres Ilustres (Pantheon of Illustrious Men) are the best examples of Madrid’s neo-byzantine art and architecture. It was built during the early 20th century and its cupola is one of its most remarkable features, with depictions of the four Apostles. The white marble altar is also worth noting.
Iglesia de San Manuel y San Benito, Calle de Alcalá 83, Madrid, Spain