The Most Eccentric Public Artworks In Barcelona 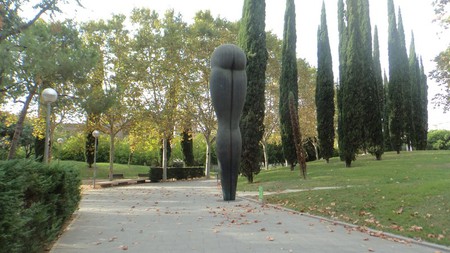 Barcelona is well known for its stunning Gothic, Roman, and Art Nouveau influences. An eclectic city with an astounding art and architectural history, Barcelona’s public art scene is, unsurprisingly, one of the best around. Merging provocative modern and contemporary constructions with the city’s old-world streets, we take a look at Barcelona’s best public artworks.

The Face of Barcelona, Roy Lichtenstein

Constructed in his unmistakable comic book-like aesthetic, Roy Lichtenstein’s gigantic Pop Art face was designed specifically for this city. Most evidentially, The Face of Barcelona symbolizes the colossal changes that the city underwent preparing for the 1922 Olympics. 15 meters high and covered with vividly-colored tiles, this provocative female grimace inevitably catches an eye of all the passers-by, and has become one of the most widely visited tourist attractions.

Wounded Star, also known as The Cubes, has long been a mysterious work for its strange name. It was installed by the German artist Rebecca Horn on the beach of La Barceloneta right before the Olympics. Many people think that it is a homage to chiringuitos – the typical beech bars of the area which were extremely popular among the locals but were demolished on the eve of the Olympics. Indeed, the global architectural modernization of 1992 was a time when the ‘old stars’ had to give place to the new ones. The other popular legend says that the sculpture imitates the tiny flats of the old houses of La Barceloneta. Well, if you have an apartment there, you will, for sure, agree that this version has good grounds, as well. 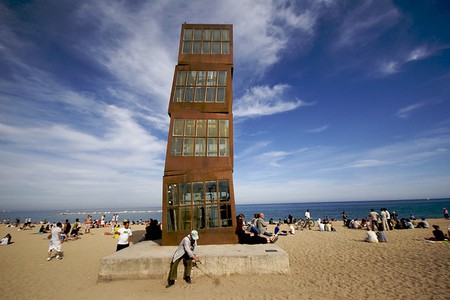 This is another conceptual sculpture with an ambiguous name, Long Voyage. As with many other eccentric sculptures of the city, it appeared in the area of Sant Martí on the eve of the Olympic Games. Does it symbolize an abstract traveller, a heap of suitcases, or boxes that are used during the move from one flat to another? This is an open question, and better switch on your imagination to create your own version. 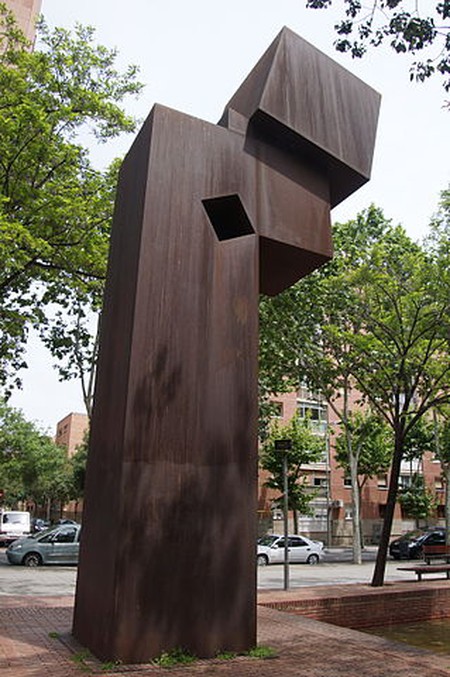 The fattest cat of Barcelona lives on the Rambla del Raval, and is undoubtably one of the most beloved works of art in the city. It was created in 1987 by the Colombian artist Fernando Botero. Initially it was installed in Ciutadella Park near the zoo, but in 1992 it was moved to the area of the Olympic Stadium, then to a tiny square of Blanquerna near the metro Drassanes. Only in 2003 did it go home to Raval, and remains one of the city’s best known installations. 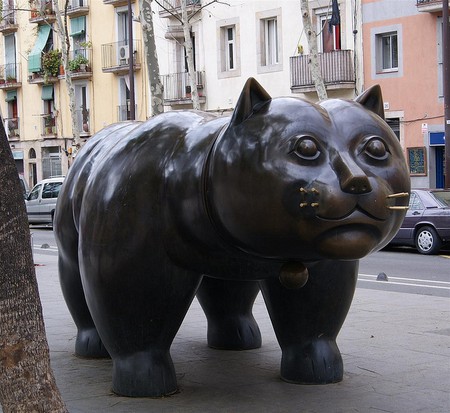 Also by Botero, The Fat Horse can be found at the terminal of El Prat airport. An allusion to the infamous Trojan Horse, Botero’s sculpture links to the concept of humans travelling around the world. 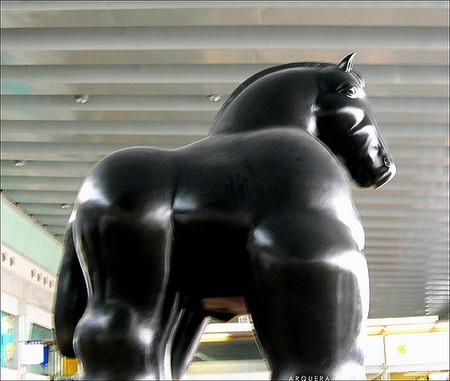 The Woman and the Bird, Joan Miró

As is the case with all of Joan Miró‘s works, The Woman and the Bird is symbolic and provocative. The statue represents the union of masculine and feminine, a duet between life and death. In Catalan, it is pronounced as Dona i Ocell; ocell, besides translating to ‘bird’, also translates to ‘penis’ in Catalan slang. And indeed the upper part of the work gives rise to such parallels. As for the vertical corpus, you may easily recognize an abstract female figure in it. The statue was established in 1983 in the Park of Joan Miró right before the death of the renowned artist. 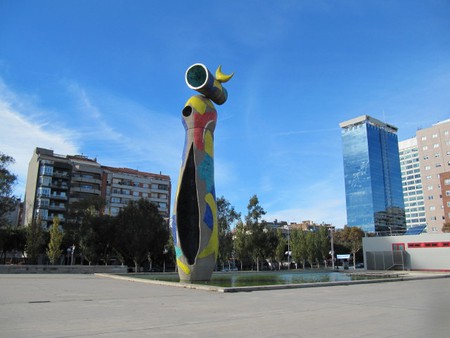 The Shrimp by Javier Mariscal is one of the funniest emblems of Barcelona, situated on the quay Moll de la Fusta between the building of the Central Post Office and the Columbus Column. Initially it was a decorative element of the sea food restaurant Gambrinus, inaugurated in 1989. Thanks to its eccentric facade (that looked like a transatlantic ship), designed by the architect Alfred Arribas, and this gigantic sea creature on the roof, the place became extremely popular in the neighborhood. However, after the Olympics, it went bankrupt and was soon demolished. The statue of the shrimp had been kept in the city’s depository for 10 years. It wasn’t until 2004 that the city decided to re-establish it to entertain the passers-by and let them take a breath in its shade during the midday summer heat. 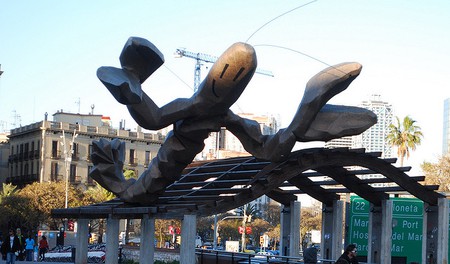 What could be more provocative than a statue dedicated to buttocks? Barcelona has had this masterpiece by Eduardo Úrculo since 1999 in the Park of Carlos I, close to the Port Olímpic. According to the artist, this bronze statue, seven meters high, is actually devoted to a real person: Santiago Roldan. He was a president of the Olympic Holding between 1989 and 1993. What did Señor Roldan do wrong to the architect to be commemorated in such a mannar, is still a mystery. Whatever it could be, the sculpture was accepted by the citizens of the area with great success.

This colossal matchbox 22 meters high was created during the preparations for the Olympic Games, in which largescale architectural experiments and urban renovations took place (are you picking up on a them). This colorful sculpture by the renowned American pop-artist Oldenburg was established in Valle de Hebrón to revitalize the city’s outskirts and add a humoristic touch. We may see that some matches are broken but the principle one is sparkling, and this can symbolize the achievement of goals, despite the obstacles, and the energy of life. 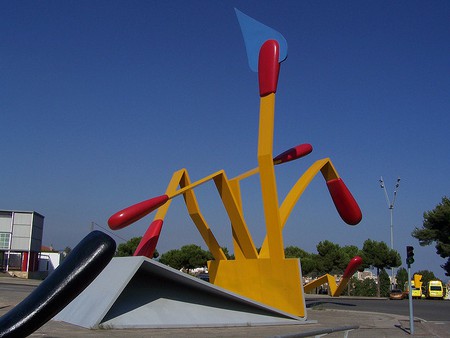 From first sight, this glass cube with its furniture inside seems a very strange allusion to Picasso. The structure is as abstract and conceptual as all the other sculptures by Antoni Tàpies are. Only looking at this monument with more attention and adding critical analysis, you start understanding the metaphors of this ironic sculptor. So, in fact, the art-nouveau furniture represents the epoch in which Picasso lived in Barcelona. Moreover, there are some of the painter’s famous statements on it. One brilliant quotation says that, “the paintings are not created to decorate someone’s house, but to be a weapon in the attack against the enemy.” 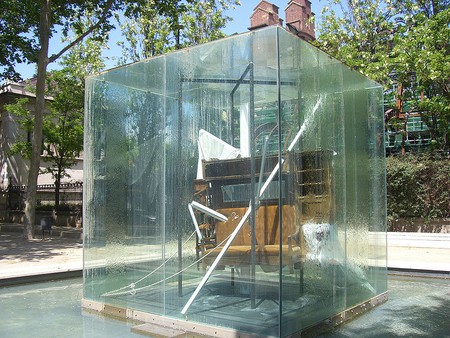