Everything You Need to Know About Seville´s Semana Santa 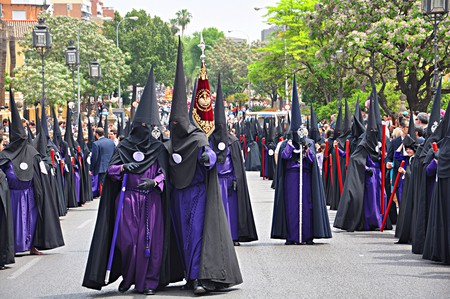 In the Andalusian capital, Semana Santa, or Holy Week, has been celebrated in its current form since at least the 16th century. Along with the epic April Fair, it’s Seville’s biggest annual fixture – a great social occasion and for many, a profoundly religious one too.

During the week preceding Easter Sunday, the Andalusian capital is taken over by the vast crowds that gather to watch somewhat maudlin Catholic processions move slowly down the narrow streets, clouds of incense dispersing in their wake. Organised every year by around 70 of Seville’s church brotherhoods – confradias – the centrepiece of these processions are palos, or floats, bearing elaborately-decorated statues of Christ and the Virgin Mary, as well as lovingly-prepared scenes from the Passion of Christ known as misterios, or mysteries. Brass bands provide the spectacle with an austere soundtrack, with shrill trumpets wailing over the dull thud of drums, and the combined effect is one which often reduces adults to tears of repentance and adoration. From overlooking balconies, local singers perform emotionally-charged saetas, tributes to the Virgin Mary. It’s a far cry (no pun intended) from Easter bunnies and chocolate eggs. 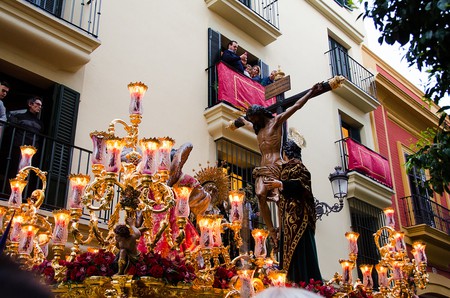 Processions follow a designated route that runs from their parish church, through the centre of Seville to the city’s enormous Gothic cathedral, and back. Between six and nine processions take place every day from Palm Sunday through to Easter Sunday, the earliest starting at midday and the latest at 1am. They can comprise thousands of members of their respective confradias and last up to 14 hours. No wonder, then, that for the costaleros who carry the huge, swaying pasos on their necks and shoulders, participating in Semana Santa is a profound act of self-flagellation, as well as a great privilege.

Indeed, for a first-time visitor to the Holy Week celebrations in Seville, it might not be obvious at first glance that the forbidding Christs and Virgins are being carried by people. But if you look underneath the thick drapes of decorated velvet and silk that adorn the sides of the floats, you will see dozens of pairs of feet shuffling along. It can take anywhere between 20-50 costaleros to carry these floats, which can weigh as much as a ton; preparation is key therefore, and those selected for the honour are often seen practicing during the weeks before Semana Santa, carrying unadorned pasos topped with bricks. 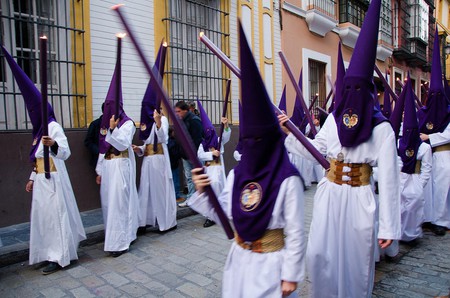 As distinctive as the Christs, Virgins and misterios of these enormous parades are, perhaps the most iconic sight of the Holy Week celebrations in Seville is provided by the nazarenos. Walking in pairs, these silent, sometimes-barefooted repentants lead the processions and wear spookily-pointed hats that bear a sinister resemblance to (but which have absolutely no connection with) headware favoured by the Klu-Klux Klan. Save for two small eye-holes, their faces are completely hidden from view behind their masks, in order that they may seek forgiveness for their sins in anonymity. Visitors to Seville during Semana Santa are often treated to the bizarre sight of off-duty nazarenos texting on their mobile phones or stopping off somewhere for a quick beer and tapas. 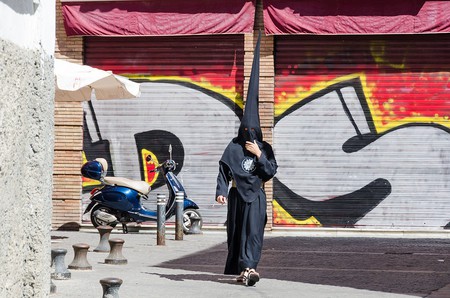 After several days of intense celebrating and repenting, Semana Santa in Seville reaches its climax with La Madruga (from the Spanish for early morning) in the small hours of Good Friday. Starting at around midnight on the Friday, processions bearing the city’s most-adored Virgins – those of Triana and Macarena – weave their way to the cathedral. The week’s most haunting procession starts at 1am, that of Seville’s oldest brotherhood, El Silencio. As the fraternity’s name suggests, this parade takes place in eerie silence, its participants moving slowly by candlelight through the darkness, observed by hushed crowds. It can be a slightly unsettling experience when witnessed for the first time, but certainly an unforgettable one – just like Semana Santa itself.