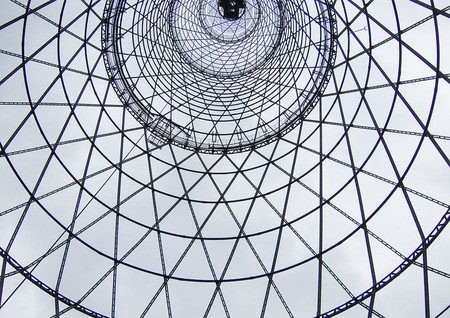 Born out of the wider art movement of the same name, Constructivist architecture had its heyday in the Soviet Union during the early 20th century. Combining conceptual design and geometric aesthetics with the communist sense of communal living and common social purpose, Constructivist architecture was a boundary-pushing school of thought that challenged traditional design aesthetics, ideas and notions on how to live. While many buildings are in various states of disrepair, their legacies still serve to remind us of an era that embraced bold design and epic ideas. Be inspired by some of the most epic design concepts of the early 20th century with these impressive buildings.

Designed in 1924 by Russian artist and architect, El Lissiky, the Cloud Iron was a series of eight identical horizontal L-shaped buildings that were never actualised. They were, however, set to punctuate the main intersections of the Boulevard Ring, Moscow‘s middle ring road. According to the design plan, three stories of flats and office space were to be built on the horizontal block, raised 50 metres above street level, which were also set to act as tram stop shelters. The vertical pylon extended underground and served as an access point to the metro system, connecting the flats and offices to the mass transport system through an internal staircase. 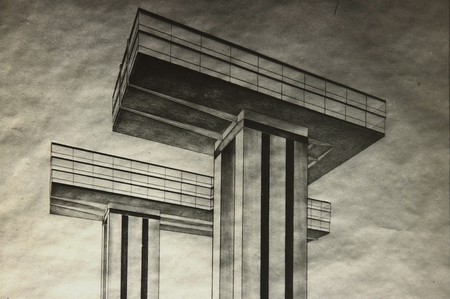 Designed by Ivan Nikolav in 1931, the Moscow building was designed to accommodate 2000 students. The driving design concept was to separate and maximise common areas from the living space, which was minimised down to sleeping space only – all possessions had to be stored in lockers in communal areas. The end result is a H shaped building: a block of public services connected to a study block by an eight storey, 200 metre long, corridor of dormitories. In the original design the dormitories were only 2×2 metres and windowless. However, this was regarded as too extreme and so room sizes were increased to 2.7×2.3 metres and windows were installed.

Jutting out on the Yekaterinburg City Pond peninsula is the charming Dynamo Sports Centre. One of the most iconic buildings in the city and the oldest sporting complex in town, it was built in 1934, and has been used a sports and recreation centre since. It is now a site of contention, as the city elite and authorities want to use the site to build a a new church. Locals argue this church would come at the expense of the city’s greatest landmarks and would be a significant cultural loss for the city, which is known for its Constructivist facade.

Hotel
Facebook
Email
Twitter
Pinterest
Copy link
Share
Map View
Nicked-named the Honeycomb Hotel thanks to its protruding hexagonal balconies, Hotel Amanauz is a true celebration of concrete and brutalism right in the heart of the Caucasus Mountains. Designed with 480 rooms, a 630-person cinema as well as a host of social and cultural facilities, no one ever used any of them because the hotel was never finished. The project started in 1985, and despite changing ownership several times, construction stopped soon after. It now stands as a throwback to mid-century Soviet style. While constructed 60-odd-years after the initial wave of Constructivism, much of its geometry rings true to the style.
Open In Google Maps
118 A155, Karachaevo-Cherkesskaya Republits, , Dombay, 369232, Russia
Give us feedback

Another unrealised project, the Palace of Soviets was set to be one of the most epic Constructivist designs in the USSR. Plans were to build this administrative centre and the congress hall right near the Kremlin where the Cathedral of Christ the Saviour now stands. Construction started in 1937, however was halted by the German invasion in 1941. By 1942 the steel frame was disassembled and used in infrastructure and as fortification. It would have been the world’s biggest building at the time. 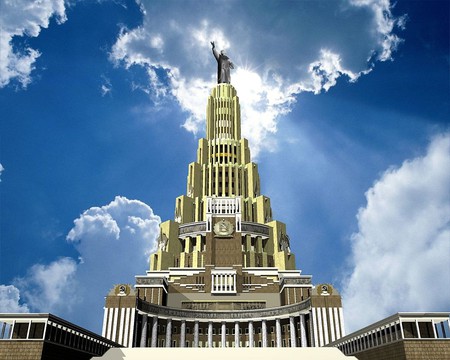 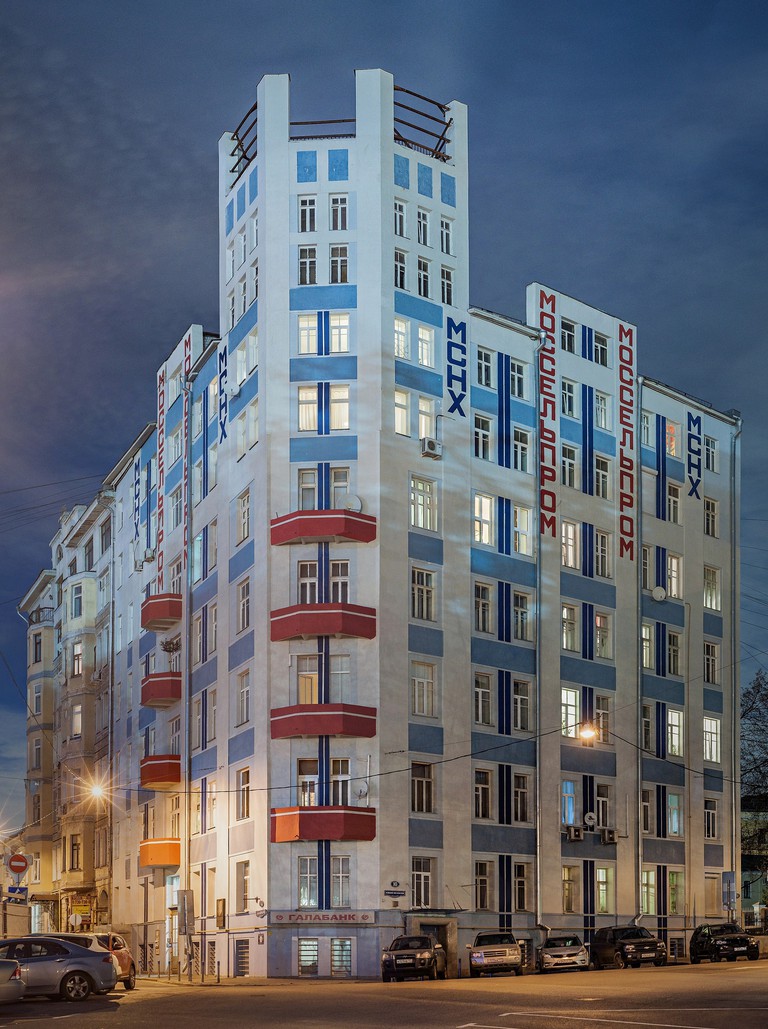 Mosselprom Building | ©Andrey Kryuchenko/Wikimedia
A combination of both Constructivism and Avant-Garde, it is most known for its panels, painted by one of the founding Constructivists, artist Alexander Rodchenko and his wife Varara Stepanova. Built in the early 1900s as an apartment building with restaurant, it initially collapsed soon after construction. Two extra stories were added as part of the rebuild for use by Mosselprom, an agency representing food and consumable manufacturers. Rodchenko and Stepanova painted the facade with Mosselprom advertising on the initial panels, which have since been painted over.
Open In Google Maps
Mosselprom Building Tsentralnyy administrativnyy okrug Moskva, 125009, Russia
Give us feedback

Designed by renowned Architect Andrey Kryachkov, the award-winning 100 Flat Building was designed for the Soviet elite in Novosibirsk during the the 1930s. It consisted of eight floors housing 100 flats of various sizes (although now there are 110 flats). For his efforts in designing this building, along with several others in the city, Kryachkov was awarded a gold medal at the International Exposition of Art and Technology in Modern Life, in Paris in 1937.