Where to See Romania's Incredible Wildlife 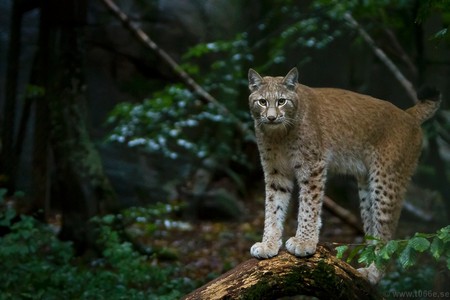 The home of some of Europe’s last virgin forests, Romania is very rich in wildlife. Apart from having the largest population of brown bears on the continent, the country is one of the few places in Europe where you can spot the almost extinct European bison, the Dalmatian pelican and some of Europe’s last wild horses. Not to forget, a shy presence on the list of massive and imposing wild animals, the Romanian hamster may just be the cutest animal you’ll see today!

This notoriously shy feline, once living in forests all over the continent, is now confined to those places where human presence is very low. Romanian forests host the second biggest population of Eurasian lynxes (Lynx Lynx), after those in Russia, and is a protected species.

The lynx prefers the mountain regions with large and quite coniferous woods, and the Carpathian Mountains offer just that. If you’re lucky, you can spot the lynx in Retezat mountains, Fagaras mountains, Apuseni, Gurghiu and Ciuc mountains, among others. But for the complete experience, head for a hike in Călimani national park in northern Romania and, alongside the lynx, you can also spot the wild cat, a smaller and cuter feline that lives in the Romanian forests. Best time to spot this nocturnal, carnivorous animal is either very early in the morning, or late at night, so keep in mind that it is very rarely seen in broad daylight.

Once upon a time – specifically, by mid-19th century – the brown bear (Ursus arctos) lived in all regions in Romania, from the Danube Delta to the plains in southern Romania and up to the mountain peaks. Agriculture and livestock farming have massively restricted its territory since then, but luckily, Romania currently still has the biggest population of brown bears in Europe.

A fiercely territorial animal, one brown bear needs between 50 to 270 square kilometres (5,000-27,000 hectares) all to himself. That is why, the 10,000 brown bears living in the country have found optimum conditions in the Carpathian mountains. Those include the availability of food and that of rocky areas, where they can build their hibernation dens.

Munții Maramureșului Natural Park, as well as Cheile Bicazului – Hășmaș National Park, Cheile Nerei – Beușnița National Park, and Călimani are some of the best places to see this beautiful animal. However, if spotting a bear, the best advice is to keep your distance and try not to attract attention, as they can feel threatened and attack. Those passionate about wildlife can also visit the Bear Cave, in Apuseni mountains, and see over 100 well preserved skeletons of the Cave bear, which disappeared around 27,500 years ago.

Standing tall at up to 1.95 meters, the biggest male specimens of the European bison (Bison bonasus) can weigh up to a ton, making the mammal the largest and heaviest land animal in Europe. This gentle giant – they prefer to live in herds and graze on grass, shrubs and anything green – is very well represented in Romania, where it was reintroduced in recent years and can be admired in five natural reservations.

Currently Europe’s largest bison rewilding project is found in Țarcu Mountains, Caraș-Severin county, near the village of Armeniș. This is one of the few places in the world where nature is still truly wild, making it suitable for this ambitious project. The latest addition to the park saw the arrival of 40 bison, which will be released gradually into the wild. A bison can cover a territory of up to 200 square kilometres, and their presence is very welcome in this area, as they help fertilise the meadows, boosting diversity. Also, the Acriș village reservation has 34 bison, while that of Bucșani, nearby Târgoviște and Ploiești, has 37 bison, including some young ones.

The chamois (Rupicapra rupicapra) is a friendly and lively presence in Romanian mountains. These small goats native to the European continent can run at 50 kilometres per hour and can jump distances of up to six meters and vertically, even two meters high up in the air.

Females and their young usually live in herds of around 20 individuals or more, while males are solitary for most of the year. The chamois can be spotted pretty much on all mountains, if you climb high enough. You will have the best odds of crossing paths with the chamois if hiking in Piatra Craiului, Făgăraș, Ceahlau, as well as in Bucegi mountains. The Cheile Bicazului – Hășmaș National Park is also a great spot as it offers optimum environmental conditions for chamois.

The Dalmatian pelican (Pelecanus crispus) is the world’s biggest freshwater bird. Despite its size, reaching 7.25 – 15 kg in weight and 1.60 and 1.83 cm in height, and having a wingspan between 245 to 351 cm, it is a gracious bird. A short to medium distance migrant, they live in large flocks and fly in beautiful synchrony.

You can find them in the Danube Delta, where they arrive in March and leave at the end of August. Once very numerous, with millions reportedly in Romania alone, the population has declined drastically worldwide, mainly due to habitat loss. Currently, there are approximately 450 pairs left in the Danube Delta. That is why, conservation measures have been adopted in many countries, including Romania. To encourage breeding, platforms have been placed in Greece, Turkey, Bulgaria and Romania, and results are showing.

When visiting the Delta, try to find the pelicans at lunch: they feed on fish they catch by swimming along and then quickly dunking underwater. After catching the fish in their beaks, they release the water out of the sides of their pouches and swallow the fish. They require 1,200 grams of it per day.

Also in the Delta, you will find some of the last remaining wild horses (Equus ferus) in Europe. Travel to the Letea Forest, the oldest natural reservation in Romania. Located between the two branches of the Danube Sulina and Chilia, it stretches over an area of 2,825 hectares.

The area is home to 4,000 feral horses that can be spotted in herds, grazing freely. Not exactly people shy, they are smaller than their relatives that are used for riding or for other activities. Although they are similar to the horses found in the nearby Sfântu Gheorghe village, they are in fact different and bigger in size than those. The Letea Forest reserve is an important spot due to it’s rich fauna and flora, in recent years, there have been concerns that the growing population may overgraze and cause imbalances in biodiversity. However, for the moment no measures have been taken to prevent the wild horses of the Danube from breeding.

The Horned viper (Vipera ammodytes ammodytes) is the largest among the species of European vipers, with males reaching up to 90 centimetres in length. They distinguish themselves through the fact that their sharp head features a soft nose horn, covered in three layers of scales.

The back of the Horned viper features a winding brown or black line that is most visible on males and the sides are covered in dark spots of a matching colour. Their bellies are yellow or brown and the tip of the tale is orange or even tile coloured.

A sun loving creature, the Horned viper likes to find a rocky plateau to sunbathe or climb the branches of trees to warm up. You will find it in Romania’s mountainous regions, in particular in Retezat Mountains. It has a preference for water, so it often nests along river banks. When spotted, best advice is to take a picture rather than a selfie, as the venom of the Horned viper is among the most poisonous you can find among Romanian snakes.

The Romanian hamster (Mesocricetus newtoni) is perhaps the cutest furry animal you will find amongst Romanian wildlife. Its habitat reaches no more than 50,000 square kilometres in Dobrogea, east of the country, and north-eastern Bulgaria.

A nocturnal animal, it feeds on seeds, herbs and small insects, as well as with vegetables they steal from people’s gardens. In fact, although they prefer to build their complex underground galleries in wild hilly areas areas or pristine plains, they have been increasingly attracted by orchards, vineyards and gardens. Here they find the best food, which they drag to their dens using their elastic jaws. There are currently around 3,000 individuals living in Romania, which gives the Romanian hamster a near endangered animal status.

Wild hamster! The picture is so beautiful and the little hamster is so cute 💖 #wildhamster #hamster #ericbaccega Eric Baccega