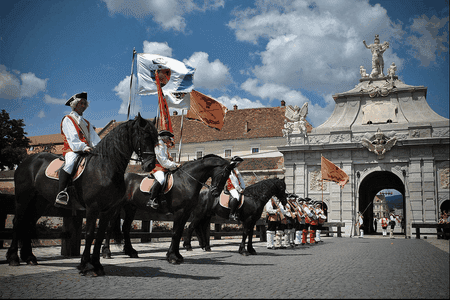 Change of the Guard at Alba Carolina | © _Monica_ /Flickr

Years ago, not many Romanians would have used Alba Iulia in the same sentence with ‘city break’. But of late, the historic city’s profile has risen and so has the number of visitors. Poised to become Romania‘s first smart city, Alba Iulia has plenty of things to see and do. Here is our top 10!

Visit the 18th-century Vauban-type Alba Carolina fortress, by entering one of its seven majestic gates. It takes around two hours to walk from one end to the other, and discover at leisure the many hidden paths and corridors, ponds with golden fish and elevated areas offering panoramic views. For a colourful experience, make sure to arrive before noon, in order to witness the spectacular change of guard. Located in the middle of the citadel, Framm’s cafe offers a great selection of drinks and doubles as a gallery, attracting locals and tourists alike with a great art selection.

The Alba Iulia Union Museum displays many examples of art, costumes and objects created by the inhabitants of the area. The objects, which reflect a high level of craftsmanship, range from jewellery to household objects and cover a wide period, from the 2nd century BC and until today.

Alba Iulia is the place where the union of Transylvania with Romania was voted on December 1, 1918, today Romania’s national day. The room where the voting took place, the Union Hall, is a popular attraction, especially as the centenary of the Great Union is approaching.

In Alba Iulia, everyone loves a good costume. So when visiting, do as the locals do and make sure to join when possible, the many re-enactments of old historic happenings. Choose from the popular Dacian and Roman confrontations, the times of the peasant revolutions or the time when Romania was ruled by kings and queens.

The prison cells of Horea and Crișan

Pay your respects to peasant revolutionaries Horea and Crișan, a symbol of resilience for many Romanians. The cell where Horea was kept is located inside the Alba Carolina fortress, inside gate three. Crișan’s cell was included in an obelisk dedicated to the three revolutionaries, Horea, Cloșca and Crișan.

A city with a rich historic past, Alba Iulia also hosts the cathedral where King Ferdinand and Queen Marie were sworn in as monarchs of Greater Romania, in 1922.

Make friends with the statues

The fortress is full of bronze cast inhabitants, caught in different instances of their long lives so for lasting memories, snap away.

One of the best times to visit Alba Iulia is on December 1, when local authorities as well as the public are celebrating the Great Union with ceremonies, music and of course, street food.

Those visiting in 2018, will enjoy the benefits of being in a smart city. By 2018, the pilot project that will see Alba Iulia become the first smart city in Romania is expected to be completed.