The Best Things to See and Do in Dorobanți, Bucharest 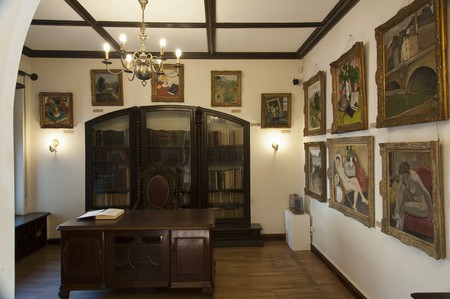 Since the 19th century, when Dorobanți became a top choice for Bucharest’s aristocracy, the neighborhood has maintained its status as one of the city hotspots. Although many of the villas that were built by some of the city’s major architects—Paul Gottereau, Louis Blanc, and Albert Galeron—have since been replaced by tall communist blocks of flats, Dorobanți remains one of the best places to eat, drink, shop, and admire the stunning architecture that remains.

Eat at a secret restaurant

On one side of the little square found at the end of Calea Dorobanți, Scientists’ House is an architectural jewel and one of Bucharest’s secret locations. A Neo-classical palace, it features many salons decorated with gilded ceilings and stained glass and features a back garden that can be reached via a monumental staircase. The structure is the former residence of one of Bucharest’s richest and most famous inhabitants, and it’s now the property of the Romanian Academy. Astonishingly, very few locals know that this majestic palace is also a restaurant, so step in confidently, as you might have the place all to yourself.

And this is the monumental exterior staircase towards the backyard of the Assan House (or the Scientist's House). You can see the facade and read a more elaborate description in my previous post. Also, more #tudorinbucharest and #tudorsstairs pictures. _______________________________ Later edit: The residence of the engineer and industrialist Bazil G. Assan (1860-1918), the first romanian who made a journey around the world (1897-1898). It was built in neo-classical french style. Elegant interiors decorated with paintings by Octav Bancila, with a monumental exterior staircase towards the backyard - you'll see it tomorrow. Bazil Assan was also the owner of the first automobile registered in Romania (FN Herstal convertible - 15 HP, made in Liège, Belgium) – competing with prince George Valentin Bibescu. Bazil Assan's car received the registration no. 1 in Bucharest (in the year 1900). Prince George Valentin Bibescu desired the no. 1 plate for his own car but since it was already taken, the Prefecture of Police had to find a workaround. Prince Bibescu received the registration no. 0. In 1945 the house was nationalized and it became property of the National Academy. It became the Scientists's House and its rooms have been renamed to Mirrors and Chandeliers Room, Chess Room, Zodiac Room, Council Room or Edison Room. Today's a restaurant in this building having the same name, the Scientists' House restaurant. #topeuropephoto #ig_europe #ig_europa #tv_living #kings_luxury #tv_buildings #tudorshouses #tcoamenidestiinta #tudorsinnercourtyards

Shop ’til you drop

Calea Dorobanți, the backbone of the neighbourhood, is one of the best shopping areas in Bucharest. Lined with shops and boutiques, it rivals those on Calea Victoriei, but visitors will find more high-street brands than high-fashion labels. Whatever you’re looking for, the variety is amazing. Alongside the exclusive shops, such as Madison perfumery, you’ll find Semnele Satului, an embroidery shop that sells handcrafted Romanian goods, as well as shoe shops and interior design showrooms.

Dorobanți is home to some of the best and most exclusive restaurants, bistros, and cafés. For an early start, opt for a rich breakfast or brunch at Frudisiac, a cozy café hidden inside a Scandinavian hut. In a hurry, grab a quick French bite at Nicolai. Try the traditional Romanian soup, or ciorba, at experts’ Ciorbarie. If fresh fish cooked on the spot is your thing, go to Raionul de Pește, a fish bar so popular you might have to queue for a table at the bar. For dinner, the options are endless, but for Romanian cuisine at a fine-dining restaurant, Maize might just be your best choice.

Go on an architectural treasure hunt

Pick one of the radial streets that start nearby Piaţa Dorobanţilor, and set aside a few hours to take in the stunning architecture that will unfold before your eyes. The streets are named after world capitals,—Strada Paris, Strada Londra, or Strada Teheran—and they’re lined with imposing villas with unique features and details. Many host embassies and are surrounded by gardens, which offer a double thrill in spring and early summer: large honeysuckle bushes cascade over the high fences and among the majestic magnolia trees.

Explore the Museum of Maps

You’d have a hard time trying to find a cuter or more original little museum in the whole of Bucharest. The magnificent 1920s building is filled with more than 1,000 treasures, including old maps of cities and of the sky, as well as paintings and city veduta, which you can observe carefully with the magnifying glasses provided. Reserve a few hours for your visit so you’ll also have time to check out the architectural details of the building, such as the Art Deco stairs, Gothic arches, and Venetian loggias.

Due to the exceptional quality of art works on display, as well as the variety of master artists featured,—Romanian and international—this relatively small art museum is also one of the best in the country. Alongside iconic paintings by Romanian artists, such as Ștefan Luchian, Theodor Pallady, Nicolae Tonitza, and Gheorghe Petrașcu, the museum displays works by Pablo Picasso and Henri Matisse and hosts the only canvas by post-Impressionist painter Paul Cézanne in the country. Add to that works by sculptors Constantin Brâncuși and Oscar Han—whose kissing couple sculpture, displayed in the backyard, is one of the most sensual pieces around—and the picture is almost complete.

One of the quirkiest museums in Bucharest, the Dr. Victor Babeş Memorial Museum is a son’s gift to the legacy of his father, one of Romania’s most renowned scientists. One of the founding fathers of microbiology, Babeş left behind a vast collection of studies, which were all kept in the 1920s villa built in an eclectic style. Alongside valuable manuscripts that date from the end of the 19th century, the collection also features vintage furniture, including the scientist’s desk, as well as tapestries and ceramics.

Reflect at the headquarters of Romanian Television

Romanians changed the course of history forever when they took to the streets in December 1989 and ousted the Communist regime. During the revolt, the headquarters of Romanian television, the TVR Tower near Piața Aviatorilor, was the scene of shootings that claimed many lives. As you pass the iconic tower, reflect on the city’s troubled history, which overlaps with that of Romania itself.