The 7 Most Beautiful National Parks in Romania 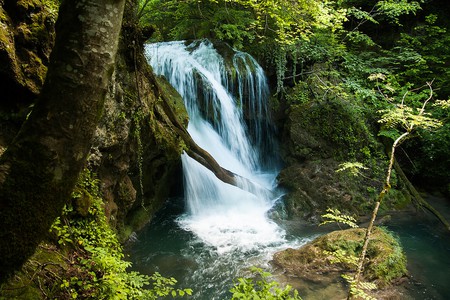 Romania has 14 national parks and, guess what, they are all very beautiful. From the Daffodil Glade in Rodnei Mountains, to the Bigăr Waterfall in the west and the Danube Delta in the east, they all have something special to offer. To make things easier and help you pick your favourite, we’ve listed seven of them and highlighted all their best natural and man-made attractions.

Located in central Romania, Buila-Vânturarița, the smallest of all Romania’s national parks, is home to a surprising variety of plants and animals. Here you will encounter no less than 23 types of habitats, featuring mountain meadows, rivers, over 100 caves and plenty of picturesque waterfalls.

But above all, this national park is a paradise of wild flowers. While hiking on VânturarițaMare(1885 meters / 6184 ft high),keep your eyes peeledfor very rare species such as Martagon lily, Lilium jankae and Viola alpine.

Stop for a break at Schitul Pahomie, a church built in the 16th century under a massive rock and Pătrunsa Monastery, also located in the park. Nearby, you will find the picturesque village of Horezu, world famous for its colorful ceramics.

Spread over 24,000 ha, Călimani national park is the place to spot some of Romania’s most incredible wildlife. While walking under the thick shade of the Pinus cembra, part of a scientific reservation, you may come across the brown bear, deer, the lynx, badgers and wild cats. The park is also home to the geological reservation, 12 Apostoli, in the volcanic Călimani Mountains.

Start your visit to Călimani national park in Vatra Dornei and head towards 12 Apostoli peak, and you might just find yourself under a double rainbow.

With heights of almost 2,000 meters/ 6561 ft– its highest peak Ocolaşul Mare stands tall at 1907 meters/ 6256 – Ceahlău mountains are the most popular amongst hikers.

Here you will be able to spot some very special plants, such as the lady’s slipper orchid (Cypripedium calceolus), the bog rosemary, the edelweiss and more.

The clear mountain lakes attract a varied population of birds, such as the Black stork, a very shy bird that prefers quiet spots in pristine nature, and the European roller. If you look up you may spot the Golden eagle, a bird of prey with amazing hunting prowess.

The second largest national park in Romania, Muntii Rodnei was also named a biosphere reservation due to the importance of its fauna and flora. The park has very varied flora, with more than 1,000 species, many endemic to the area.

One of the most spectacular spots is the Daffodil Glade, a valley filled with a carpet of fragrant wild daffodils that should be on anyone’s bucket list.

Another picturesque spot is Cascada Cailor, a spectacular waterfall that falls in 40 meter steps and Iezer Lake, a clear mirror turned towards the sky. The area has been used traditionally by shepherds, who have more than 100 shepherd folds set up here.

Cheile Nerei-Beușnița stretches over 36,000 hectares and includes six natural reservations. Most of the surface, with heights ranging from 600 to 1,000 meters, is covered in thick forests. This provides the perfect habitat for bears, deer, wild boar, badgers, stone martens and more. As the nature is unspoilt here, you can find almost 600 species of plants and trees. The park made the news when archeologists found the remains of the first early modern humans the Cro-Magnon, estimated to be 42,000 years old nearby.

Aside from lakes Ochiul Beiului and Ochiul Dracului, the top attraction of the park is Bigăr Waterfall, a love story between an underground spring and a rock covered in emerald green moss. Hiking and rock climbing are both popular activities to in the park, as is rafting on Nera River.

Another national park with amazing wildlife diversity, Cheile Bicazului – Hășmaș is almost fully covered in Norway spruce. The trees hide many species of mammals, such as bears, wolves, foxes and wildcats, the chamois deer as well as reptiles, such as the northern crested newt and yellow-bellied toad.

The area is very popular with hikers, who can choose from 18 spectacular hiking trails, from the most accessible to those recommended for experts. Among them, those that include the picturesque Piatra Singuratica on the Hăşmaşu Mare mountain are a must for nature lovers.

A post shared by Transylvania a Piece of Heaven (@transylvaniaheaven) on Jun 6, 2017 at 1:03am PDT

Three major rivers, namely Mureș, Olt and Bicaz have their origin in the park. The area surrounding Lacul Roșu, which has a warmer climate than the average mountain temperature, is recommended for those who want to recover after a stressful period and is known to help against insomnia.

Located in the eastern part of Romania, the Danube Delta is the largest national park in the country. A year-round birdwatchers’ paradise, and especially during migrations, it is also the place where you can see the last wild horses in Europe roam freely. Among the 300 species that live here, 176 also breed in the Delta, including the Dalmatian and the white pelican. Only reachable by boat, the Danube Delta is a must-visit for all those who love water and nature and long to escape city life.

Only reachable by boat, the Danube Delta is a must-visit for all those who love water and nature and long to escape city life. Letea Forest, the oldest natural reservation in Romania, and currently a UNESCO World Heritage Site, is the northernmost subtropical forest and the only one of its kind in Europe. Here you can spot the red-footed falcon, white-tailed eagle, and a multitude of species of reptiles and around 2000 types of insects.

The village of Sfântu Gheorghe is a great place to use as a base to explore the surroundings, try the delicious local food and immerse yourself in nature.