The 11 Best Traditional Festivals in Romania

Traditional Romanian Dance © Veronica Maria / Shutterstock
Romania is a country where centuries-old traditions and crafts are strongly rooted in the local culture. A land where patriarchal rituals represent not only symbols of identity, but also celebrations of life. There is nothing unusual to see people dressed in traditional costumes going to church, carts filled with hay pulled by horses, or shepherds marching in the mountains with their flock. Discover traditional Romanian culture by taking part in the festivals; because there are so many celebrations, here is a list of the best.

The ‘Maiden Fair on the Gaina Mountain’ is the oldest and the biggest traditional celebration in Romania, taking place in the Avram Iancu village, in the Apuseni Mountains on the closest Sunday to the Saint Elijah celebration on 20 July. In olden times, this festivity was a gathering of the locals, where family and friends were reunited and it was also a matchmaking festival. The young women came with their parents and their trousseau and, if a match was made, the marriage was celebrated on the spot by the local priest.

Today, Apuseni women start the festival by playing the local instrument tulnic, used for communication between shepherds or to train sheep and dogs. In the village’s centre, there is a local artisans’ market with an exhibition of photos of the locals going about their daily lives. The event is animated by folk shows and a ceremony dedicated to Romania’s national hero Avram Iancu. 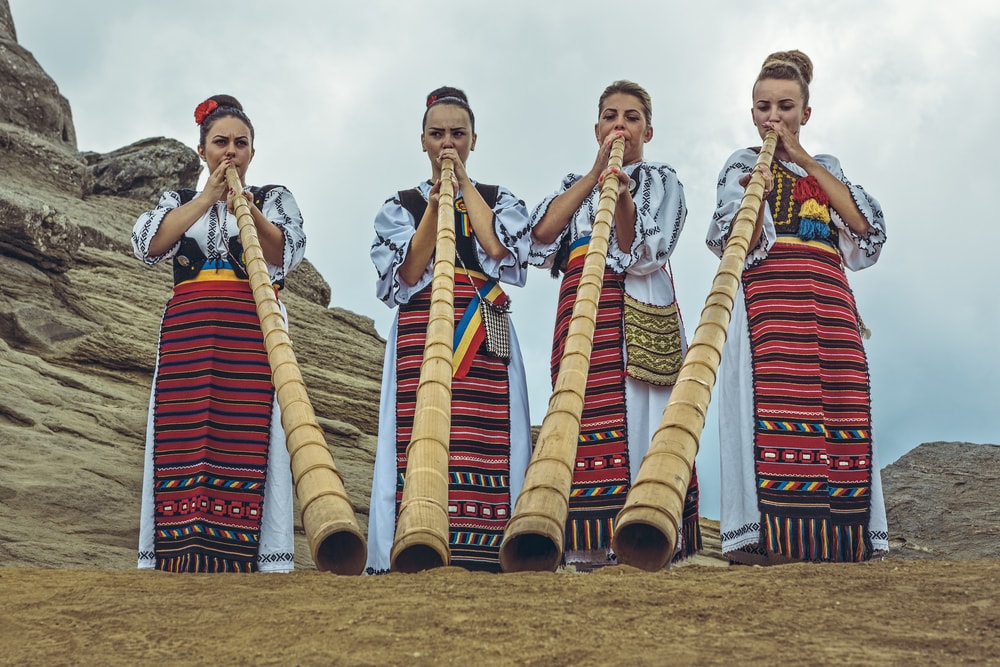 Jina is the centre of the pastoral customs of the Marginimea region, a folk region that personifies Romanian culture. In Jina, in late July every year, people celebrate archaic traditions and local folk culture in an attempt to preserve the local practices. The celebration includes traditional food, dancing and music and showcases local customs and crafts.

The National Easter Eggs Festival takes place every year, during two days and it’s dedicated to the art of egg decoration. Taking place in Ciocanesti, the village of the Painted Eggs Museum, the festival is an opportunity for local and international artists to display their talent in decorating Easter eggs. The event includes an international competition, a local artisans’ market, a fair of decorated eggs and a concert of traditional music. 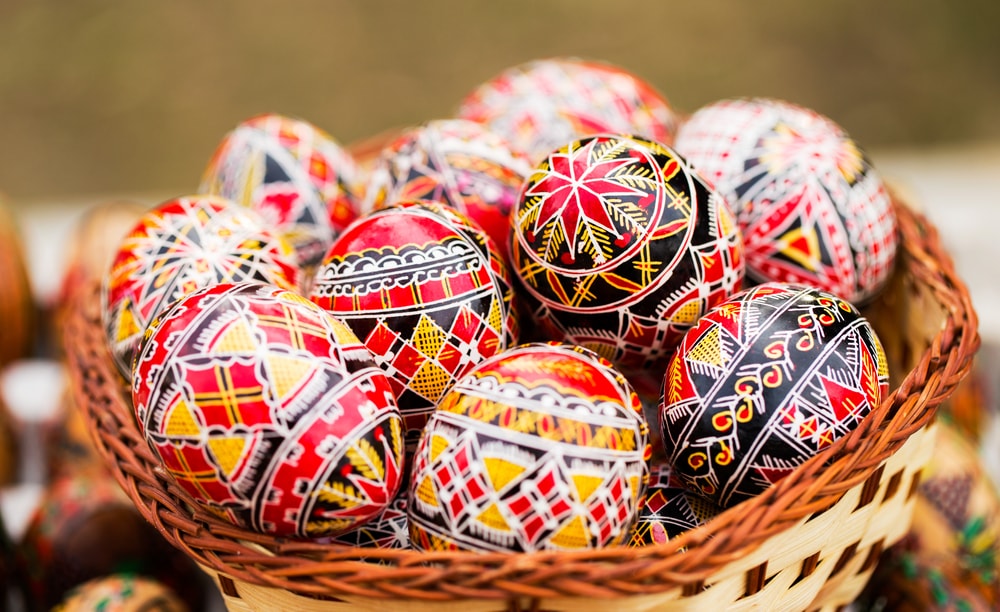 Junii Brasovului Parade is held on the first Sunday after Easter and is an event marking the revival of nature and the beginning of spring, but also a celebration of the new year of the Dacians, Romania’s ancestors. Junii are young people who used to reside in the Schei neighbourhood, where the medieval Romanians lived when they were not allowed to dwell inside Brasov’s citadel. Today, the festival re-enacts the juni descending from the mountains on their horses, wearing traditional clothes and carrying batons, sceptres and flags. They are spread in seven groups, each having its own costumes and approaching from a different quarter of the Schei district. 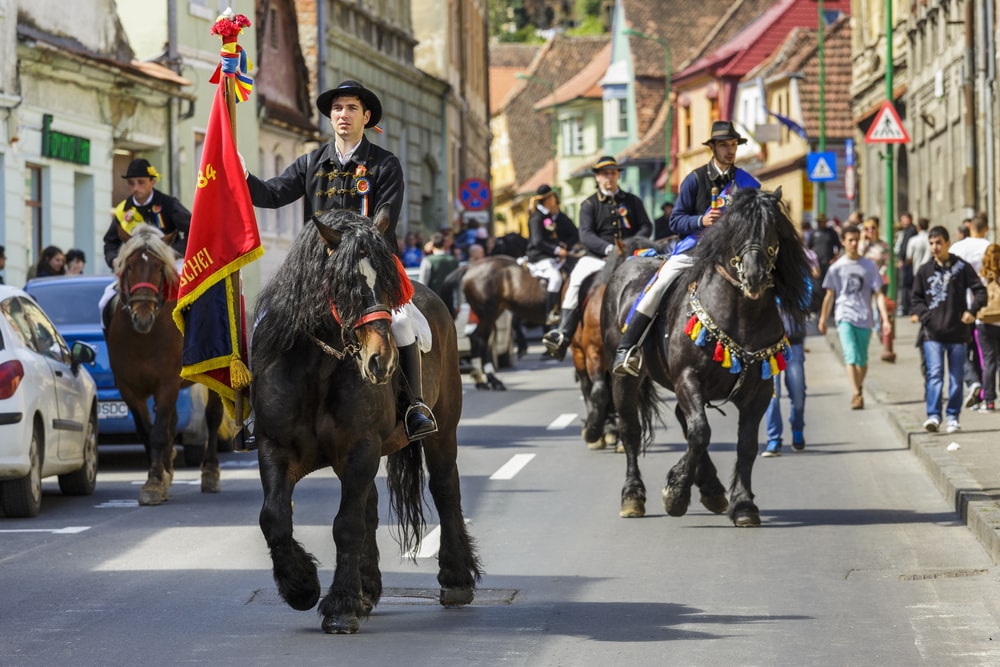 Autumn is the season when shepherds descend from the mountains and return home with their sheep. The end of the pastoral year is celebrated all over the country, marking a centuries-old practice. In the Brasov region, in the village of Tohanu Nou, the descent of the sheep from the mountains is commemorated at the end of September. During the festival, dance and music shows are performed and a local produce market is organized, where both locals and tourists can buy dairy products. 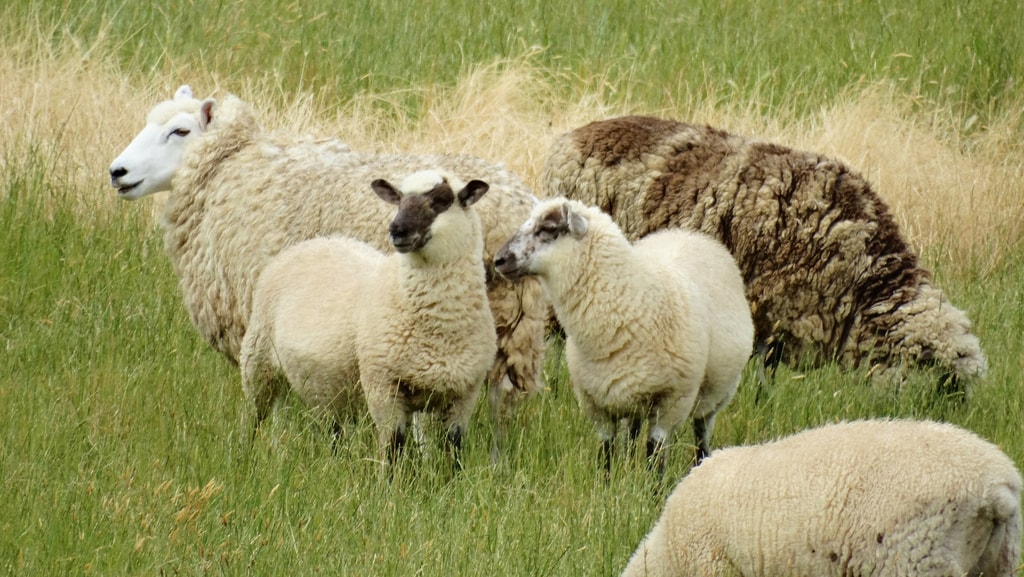 What can be translated as the ‘sheep’s distribution’ is a local festival held in early September in the village of Ciocanesti, in the Bucovina region. The festival marks the moment when the shepherd has to return each sheep to her owner. The day starts with a liturgy in the local church. All the locals are dressed in traditional costumes and at the end of the service, a folk artist sings traditional songs. Once the liturgy is finished, the locals head towards the sheepfold to take part in the sheep’s split: the sheep are milked and the shepherd negotiates his retribution for the time spent with the sheep in the mountains. The day ends with more live music. 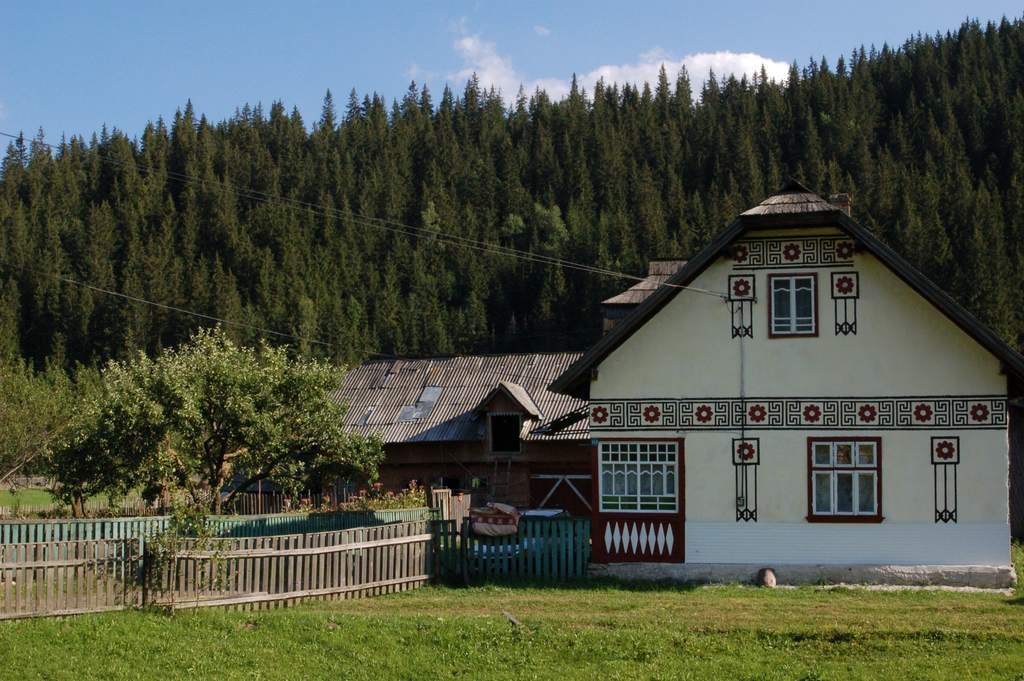 The Cabbage Festival is organized over the first weekend in October in Mosna, a charming little Saxon village. The festival takes place in the village’s centre and is an opportunity to taste traditional recipes with cabbage and to discover Romanian cuisine. In the village, you can visit the Saxon fortified church, a heritage of the old German colonists of Transylvania, brought to the country to defend the southern border of what used to be the kingdom of Hungary in medieval times. 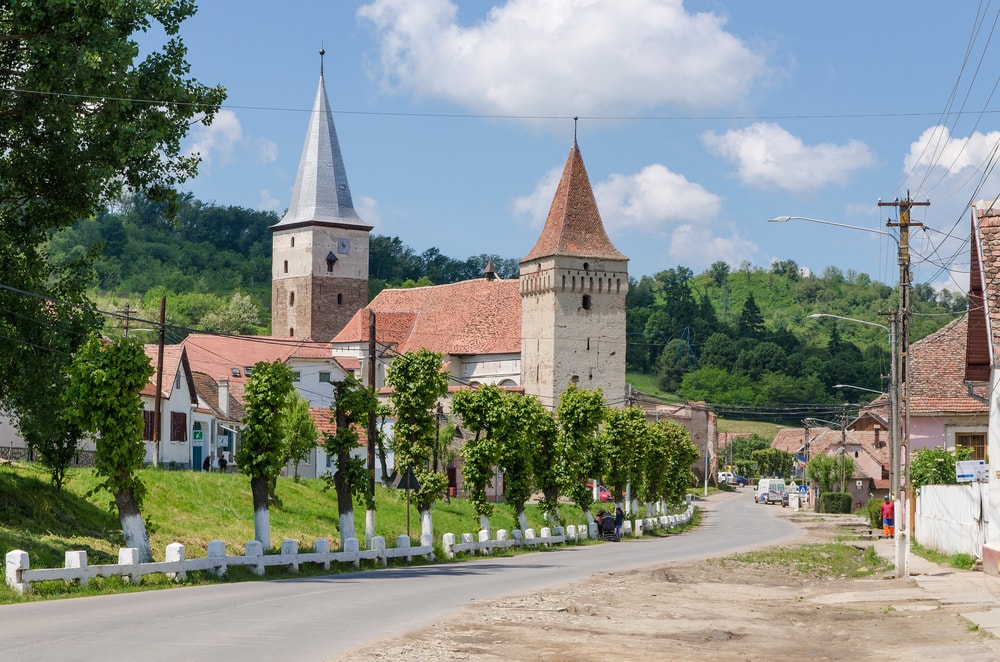 The Long Way to the Merry Cemetery

Cemetery
Merry Cemetery | © Remus Pereni / Flickr
Organized at the end of July, in the Maramures region by Peter Hurley, an Irishman who decided to settle in Romania, the Long Way to the Merry Cemetery is not only a festival but a national campaign aiming to promote the traditional Romanian village as a universal heritage. The festival is organized in two different locations: during the first week, the activities take place in Tara Lapusului, while in the second week they are run in Tara Maramuresului. The festival ends in Sapanta, at the Merry Cemetery. During the whole event, craft workshops, folk music concerts and meetings with the elders of the villages to share their life stories are organized. Every day ends with a party with local dances.
More Info
Open In Google Maps
Săpânța, Maramureș County, 437305, Romania
View menu
Visit website
Visit Facebook page
Send an Email
Give us feedback

The open-air ASTRA Museum situated in the Dumbrava Sibiului village is organized at the beginning of August and is the first festival dedicated to the craft of brewing beer. Beer and cider artisans will share the secrets of the craft, the variety of flavours of artisanal beer and its natural benefits. Visitors will be served fresh homemade beer, cider and fruit juices. Of course, there will also be a wide choice of delicious Transylvanian food: expect grilled pork sausages, beef grill, polenta and many baked goods.

Hora de la Prislop is a one-day festival held at the end of August in the Prislop Pass in the northern Carpathian Mountains. In the morning, the participants attend the service in the Prislop Monastery. Once the liturgy is finished, the parade of the traditional costumes follows as each participant wears folk habits representative for the area. This represents the official opening of the festivities, followed by dances, folk music and local dishes. 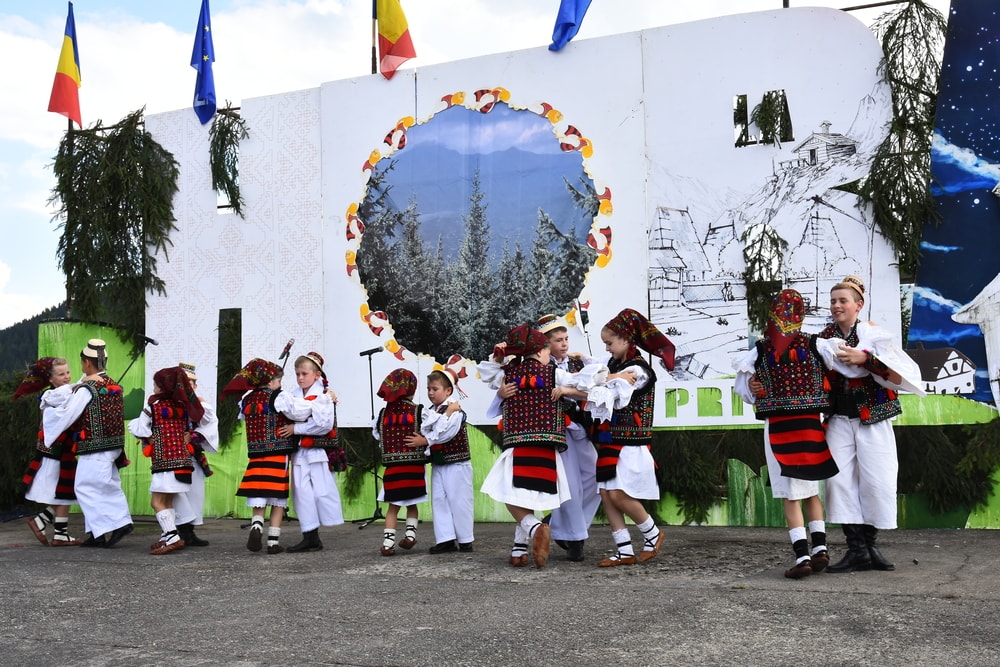 The Transylvanian Saxons Festival in early August, or ‘Haferland Week‘ is an opportunity for the Saxons who lived in Transylvania to reunite, for the visitors to learn about the history and traditions of the Saxon community and for the organizers to promote the local heritage. During a week, the festival’s activities are held in several Saxon villages: Crit, Rupea, Mesendorf, Saschiz, Bunesti, Viscri, Homorod, Roades, Archita and Cloasterf. The programme includes brunch with local dishes, photographic exhibitions, guided tours on the surrounding hills and in the villages, carriage trips, organ concerts, film showings and treasure hunt competitions.