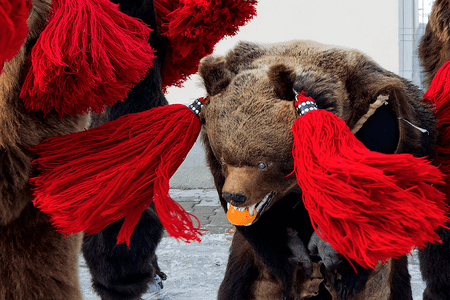 Of the many colorful Romanian traditions that are brought to life every year, the Bear Dance is one of the most awe-inspiring. Discover the meaning behind this spectacular folk tradition that dates back to pre-Christian times.

Taking place every winter in villages and cities in Romania’s eastern region of Moldova, the Dance of the Bear symbolizes the death and rebirth of time. Performed between Christmas and New Year’s Eve, this ancient ritual brings together the whole community, who gather to watch the performance. 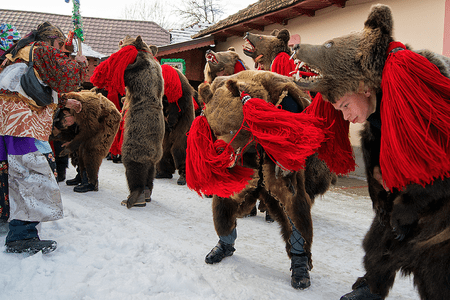 The Dance of the Bear sees men of all ages, and increasingly more women, dress in real bear skins and dance to the rhythm of pan flutes and drums, to ward off evil spirits and ring in the new year. Traditionally, the procession, which can include between six and 24 bears, would visit every household of the village, accompanied by up to three singing bear tamers, several characters wearing women’s clothes and drummers. While this tradition is still observed in many villages, in cities and towns it usually takes the form of a parade that culminates in a major performance in the center. 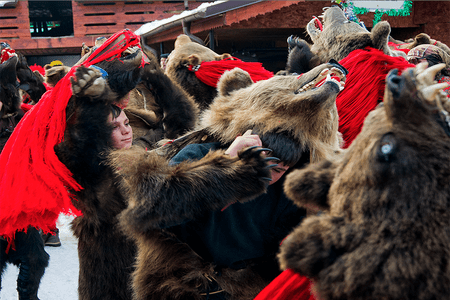 A costume can weigh up to 50 kilograms | © Alex Dima 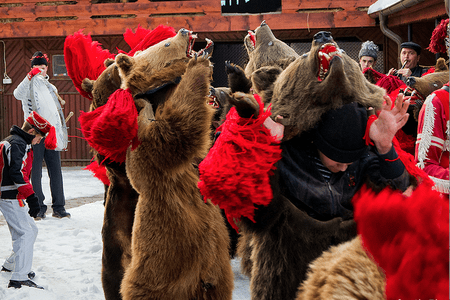 Traditionally, the arrival of the bears is announced by a small group of “irozi”, who blow whistles to a rhythm set by the head bear tamer. Chosen for his leadership skills, the head tamer is the main choreographer and director of the ceremony, for he is the one who decides when each of the acts are played and gives the cues.

The bears dance to the beat set by the pan flutes and the drums, after practicing for up to three months before the day of the ceremony. With the heaviest of costumes weighing up to 50 kilos, they require strength and must be handled with confidence, to look fierce.

When the person wearing the costume is standing up straight, the bear looks up, while during the dance, the wearer must bend forward and shake his or her body alternatively to the left and to the right, to create a swinging motion using the big red tassels on the shoulders, while taking small steps either to the front or to the side.

During the ceremony, several acts are played. In one of them, the bear tamers hit the bears with whips made of horse tails, while the characters dressed as women do so with sticks. In the central act of the Bear Dance ritual, the bears die and then are resurrected, so as to symbolize renewal, the end of the new year and the beginning of the new one. Upon resurrecting, in the final act, one of the bears is lifted on a stick by two of the characters wearing women’s clothes where he or she continues to dance lifting a round braided bread, named “colac”. 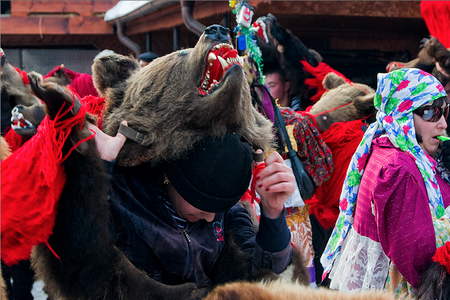 For Geto–Dacians, ancestors of present-day Romanians, the bear was a sacred animal with healing powers. The life cycle of the bear was responsible for regulating seasons, entering hibernation before winter and waking up in spring. ‘Urs’, the Romanian word for bear, is also found in that of the Ursa Major constellation, whose position is closely connected to the succession of seasons.

The tradition of the Bear Dance, preserved since ancient times, is still alive and is gaining in popularity among young Romanians, although the tradition is still confined to the mountainous and hilly regions of Moldova and Bucovina.