A Guide to Romania's National Cuisine 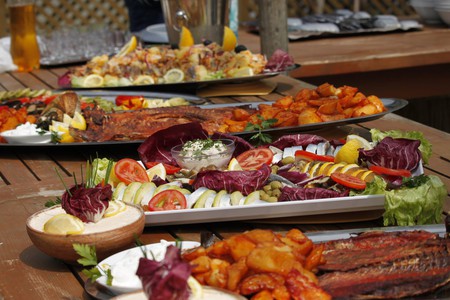 Hearty, rich and with a strong focus on flavor, Romanian traditional dishes invariably exude a homemade feel. And when cooked with the best ingredients by someone with love of food, they can take you to food heaven. Find out below what dishes you should try out on your next visit to Romania.

When traveling to Romania, one of the most surprising discoveries is the country’s national cuisine. As varied as its many regions, it is strongly influenced by seasons and major holidays, so longer stick around in the country, the more you’ll be rewarded.

For this delicious soup you’ll have to travel east to the Danube Delta. After spending hours bird watching and taking boat trips on the delta’s many meandering canals, try a bowl of storceag, a typical dish made in the village of Sfântu Gheorghe. A fishermen’s soup, its main ingredient is sturgeon, boiled together with potatoes and root vegetables, which towards the end of its cooking time receives a dressing of egg yolk and sour cream, plus a drizzle of lemon. Traditionally cooked outdoors in a kettle over an open fire, it is a dish to be enjoyed in company. 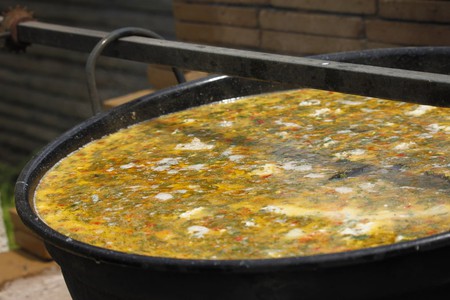 Bulz is a delicious way to eat polenta, or mămăligă, the staple dish of Romanian cuisine. Traditionally a shepherd’s food, bulz has become a popular dish that is served in most restaurants. To make it, the shepherds use fresh polenta which is then shaped into balls and stuffed with brânză de burduf. This soft sheep-milk cheese, which is matured in a sheep’s stomach or in pine bark, is another speciality traditionally made by shepherds up on the mountains. Finally, the polenta balls are grilled on hot charcoal. In restaurants, bulz is usually baked in the oven in a thick bottom casserole.

Also called mititei, this dish’s name simply means “little ones”. Made from a mix of minced pork, beef and lamb meat, they are seasoned with garlic, thyme, savory, pepper, caraway seeds, and more. They resemble small sausages, and, according to legend, were invented three centuries ago when one famous restaurant ran out of casings for their sausages. What differentiates them from other similar dishes found around the Balkans is the mixture of broth and sodium bicarbonate that is added, leaving them plump and juicy. Particularly popular at festivals and barbecues, mici are grilled outdoors, regularly splashed with water while they cook, releasing a cloud of white smoke infused with heavy aromas.

To sample the best rendition of this hearty dish, the most sensible advice would be to get yourself invited to the kitchen of your Romanian friend’s grandmother. What sounds like the simple combination of meat and rice rolled in pickled cabbage leaves can be turned into art by a knowledgeable cook. Traditionally cooked at Christmas, they are now served year-round, usually accompanied by steaming polenta, sour cream or yoghurt, a hot chili and a glass of ţuică. If visiting in summer, try the summer version, sarmale in vine leaves, which are much lighter.

Do not expect a bowl or a loaf of bread when being served with this hearty dish, which translates as “bean soup in bread”. A rich bean soup with vegetables and smoked meat, it comes served straight in a round bread with thick crust, complete with a lid. Originating from the villages around the cities of Sibiu and Alba Iulia in Transylvania, this dish is the ultimate comfort food and is best served in cold winters.

This dish with is only cooked in spring. Lamb offal is cut very small and baked with fresh garlic and a multitude of green herbs in a casing made of the lamb’s stomach. Here and there a boiled egg is thrown in, adding color to it. In addition, as it is served for Easter, it provides an additional protein boost to replenish those who choose to fast prior.

Ordering this dish in a restaurant might make you feel like a posh, well-behaved zombie, as creier is Romanian for brains. Brains are a delicacy in Romanian cuisine, and usually its is lamb, pork or cow brains that are served, dipped in batter and deep fried. As with any delicacy, they are not easy to find, so go online first and search for the places with the best reputation.

While probably you won’t get the pronunciation right first time, that is about the only risk you will take when ordering a portion of pa-pa-nash. These fried balls of dough prepared with egg and containing a type of soft, sweet Romania cheese, are served hot, with a topping of sour cream and red fruit jam, usually blueberries. While they originate from the region of Moldova, Romanian food restaurants everywhere compete to give their best rendition.

This sweet bread, with the consistency of Italian panettone, is made traditionally for Christmas and Easter but is almost mandatory at baptisms, weddings and other events. Made with more than 30 ingredients, with a filling of cocoa and walnuts, when done right it preserves a soft and moist consistency. To many Romanians, the aroma that fills the room after the cozonac is taken out of the oven and left to rest is synonymous with the smell of home. If you are served it as a guest in somebody’s house, when you are faced with the question Mai poți şi cozonac? “Is there room for cozonac?” remember to act surprised and say Da at all costs, if you want to make your host happy!